I nearly titled this post.  “Obsessive  home baker seeks stable temperatures and a weekend where nothing else is going on ” but I didn’t.

I warn you now, I ramble on and on for quite a bit, post some pictures and offer a few half baked thoughts on this process.

Along with the Horst Bandel bread, this set of breads, (imaginatively named 70%, 80% and 90% three stage Rye Breads) are the most likely to make a casual reader of Hamelman’s book, pause, grimace and turn the page. They differ from breads like the 80% rye bread with soaker because they are based on a process of building up the fermented rye component of the loaf in three stages which take anything from 23 – 34 hours, followed by the mixing and proving of the loaf itself.  The aspiring Detmolder process baker has to hold each stage at specific temperatures for specified time periods,  in order to encourage different sorts of activity in the starter at the various stages and to maximise and balance the various acids produced by the yeasts and lactobacilli in the ferment (sourdough).

Everybody  functions differently at different temperatures and levels of humidity, people, dogs,  yeasts and bacteria.  We tend to assume that the fridge is the best/only place to keep fresh food, but once you are into the realm of fermentation everything changes.  I’ve been reading various studies on the net, some of it goes over my head a bit, but I’m beginning to get the basic idea at last. Here’s one to chew on and there is much more. Trouble is, as a non scientist I have no way of assessing these studies for their level of rigour, so rather than quote a lot of stuff that isn’t actually right,  I would just say google on search terms like’ lactobacillus’ plus  ‘sourdough’ and have a read around….

The Detmolder temperatures are much higher than I want to keep my home. Easy if you are a pro baker with a proofing cabinet with variable controls. But for the home baker, it’s time to get creative and I have seen some wonderful posts where people have rigged up all sorts of kit to make proofing chambers.

There are some baking people who happen to  have a propagator with variable heat controls, or have some other hobby or work that requires a box with accurate temperature controls that could be customised to do this job. Read this great thread on The Fresh Loaf where SteveB and Pablo show off their creations for some inspiration. And visit SteveB’s awesome BreadCetera if you have a moment. He posts infrequently but his work is amazing and he has posted some superb videos too.

I can’t imagine routinely baking these breads and so have opted just to try one of the three versions Mellow Bakers are trying this month. I might return and do the others another day. It’s not that hard to find or create a spot at the right temp, but maintaining it consistently over a long period, especially at night when the heating is almost always off is tricky!

It’s all too easy to fudge about what you actually do in the process of baking. You know what you should be doing, but you do something else. I have read posts where people write they have done one thing and their photos show something else and they seem completely unaware of the discrepancy, I can only surmise that they believe what they have written is the truth. I try not to fudge but there are times when I simply don’t remember what I’ve done and I want to write the post so I make my best guess. We are all inherently unreliable and I am no exception to that. Novelists play with the unreliable narrator as a character and bloggers are no different.

But enough rambling I’ll try and summarise what I got up to in the course of this challenge….. 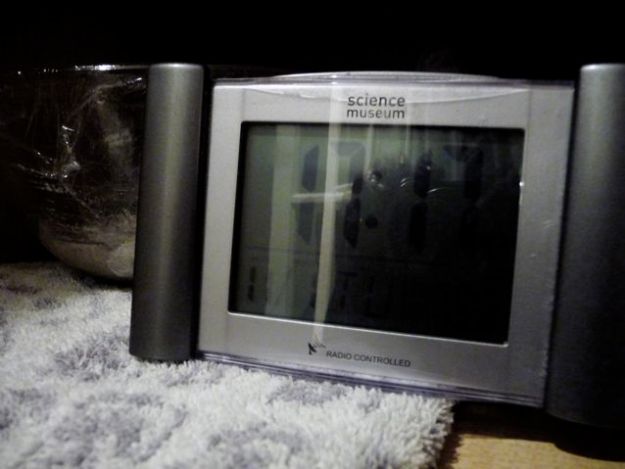 Spent several happy days putting my science museum thermometer in various locations in the house to see what temperatures I got in what I thought were the ‘hot spots’. You do need at the very least a stick thermometer to take the temperature of the starter build stages. Don’t bother with this recipe if you are not prepared to do this.

Between the boiler cupboard and the oven I managed to sustain the required temperatures but in the summer when the boiler wouldn’t normally be on for such extended periods I am not sure quite what I would do. Paradoxically therefore I am better off making this bread in the middle of a winter cold snap. Edit: I discovered that my Neff oven could go as low as 30 C, but at that temperature the internal temp of the starter either stayed cooler than that without a lid on the container, or went a bit hotter with a lid, so it was a question of monitoring every hour or so…)

I interpret this as being not a wholegrain rye flour of the type we get here, in the UK,  full of quite coarse rye bran, nor being the light rye sold by Shipton, which is very pale and light and appears to have no bran in it at all.  Before I have simply used half of one and half of the other but this time I sieved the wholegrain rye and removed a good 90% of the bran. 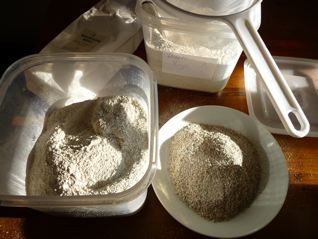 No idea if this is the way to go about it, but the crumb of the final bread shows a smooth look and I also think it made the dough easier to shape for some reason.

I have read that bran in a dough ‘cuts’ the gluten strands, so maybe that is it? After I had made this bread I was kindly given a bag of German rye flour which would  probably have been ideal.  Oh well, never mind.

Putting aside the time to do this is also a big demand on the home baker, you do have to be around to check that the temperatures are staying in the specified ranges. Like making panettone with a sourdough starter, it’s all possible, but not really practical for regular baking.

Hold back on the water when mixing the final dough. Leave out the yeast, well I did and I think this particular bread rises better for it. I don’t understand why the yeast  is necessary at all at the final stage of this long bread, may as well carry on being mellow about the time it takes! Use either oil or flour to shape your loaf at the end. It should be possible to shape it;  if it is too soft and porridge like to shape you have made it too wet.

Shaped and into the tin for about three hours. This tin holds about 750 grams of dough, this was the biggest of the three tins I used.

After three hours or so the dough had risen to within about 1/5 cms of the top of the tin, more than doubled, and small air bubbles were appearing on the top, so I put it in the oven. If you make this, follow your eyes and not the recommended time in the book. Rye doughs like this will rise, though they may appear to do nothing at all for the first hour or more. Keep it somewhere warm too.

I recommend doing this in a tin as it is much easier to decide when to bake the bread. I also think it might work well baked in a Dutch oven or closed pot. I have yet to try that though.

What I’m aiming for with this bread.

Ideally you want a thin crust to these breads, a spongy and airy texture and a delicate soft sour taste which doesn’t fight with the wonderful flavour you get from high percentage rye, but complements it. The Detmolder process delivered this, it really did. It was one of the nicest tasting rye loaves I have ever made.

Now I’m thinking maybe I should make the others as well….

Whatever you do, resist the urge to cut them for 24 hours. Wrap them in clingfilm or buttered paper or linen or something for that time. The crust will soften and the crumb stabilise and it will be much, much nicer. 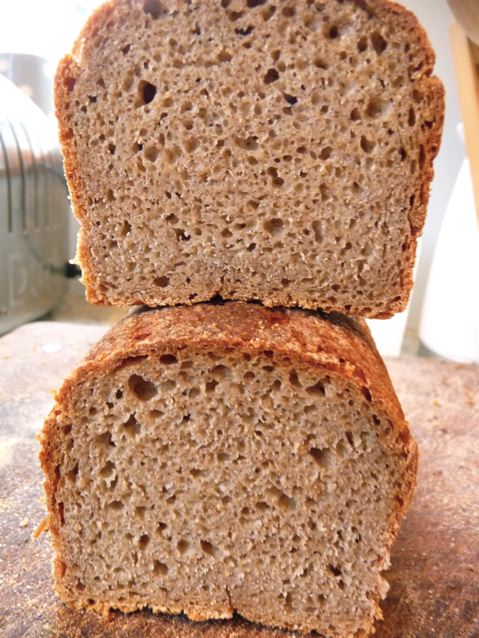