When I first started blogging I wrote a little post with the rather uninformative title of How Much do I love this bread? I learnt how to make this bread originally from Nils who blogs as the Inverse Cook at Ye Olde Bread Blogge.  (pdf of this post if you want to download it and use it at home  → Sourdough Rye 60/40 post )

I looked at that early post the other day and thought I can do a bit better than I did there, so rather than edit an old post I have had another go at making the bread and describing the process for those people who are new to this blog or for those who are looking for a really good rye/wheat sourdough style loaf to make.

One of the challenges of making rye breads is that we are fairly limited as to what rye flour we can get hold of here in England so here is the list of the flours I used.

If you cannot get theses two types of rye flour, then sieve some dark rye to remove the bran, or use all whole rye, the loaf will be just fine! One of the best ways to prepare rye flour is to pre-ferment or acidify it when using it as a major component in a dough. Jeffrey Hamelman writes in detail about the requirements of rye flour from pages 43 – 49 in his book, Bread. (1st edition)

I have been re-reading it recently as you know and though there is more detail there than the average person probably wants to hear about,  some of it is quite interesting if you are a bread geek and want to understand,  for example,  why rye flour is more absorbent than wheat flour  (it is higher in bran and usually finer) , is so very sticky (high in pentosans which compete with glutenin and gliadin in the flour for moisture) and without using a sourdough, is prone to the dreaded ‘starch attack’ (due to being a grain higher in amylase enzymes which break starch into sugar and prevent good crumb formation).

Two things I remember even when I forget the science stuff.

Firstly, mix it gently and don’t worry about kneading it, though folding it never hurts.

To make Nils’s lovely bread using English sourced flours this is what I did this week: 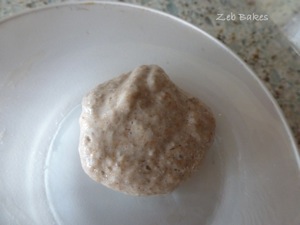 Mature rye starter has a slightly orangey tinge to it. 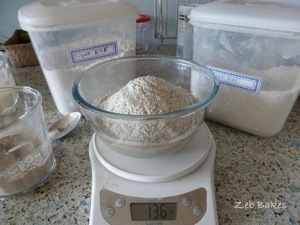 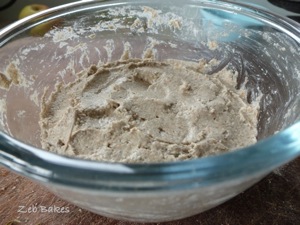 You will be able to see a network of bubbles through the sour when it is acidified and the top of the sour should curve like a shallow upturned saucer.

When you put a spoon in the sourdough you should see holes and bubbles in it as above. It won’t look like this wheat starter which is full of gluten and therefore looks quite different at this stage. The rye sourdough is more static in appearance than the wheat which is very lively and mobile. See the next photo:

For the final dough:- 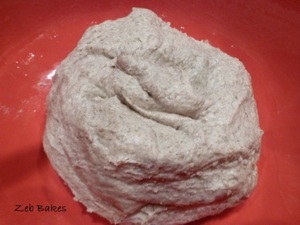 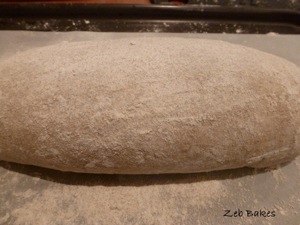 A useful thing to know….

I recently sent a Twitter friend some of my rye starter in the post to play with before she went on a bread baking course.  I simply mixed a lot of rye flour in with the starter till it had a consistency like bread crumbs, put it in a jiffy bag and in the post overnight. She revived it by feeding with flour and water and was baking with it within a few days. It’s very easy to send sourdough in the post this way.  The other way to do it is to spread the sourdough starter out thinly on a piece of parchment or greasproof paper, A dough scraper is useful for this, leave it to dry and then crumble it up into flakes.  This is also a useful ‘insurance’ measure against inadvertently using all your starter by mistake one day in a bread.