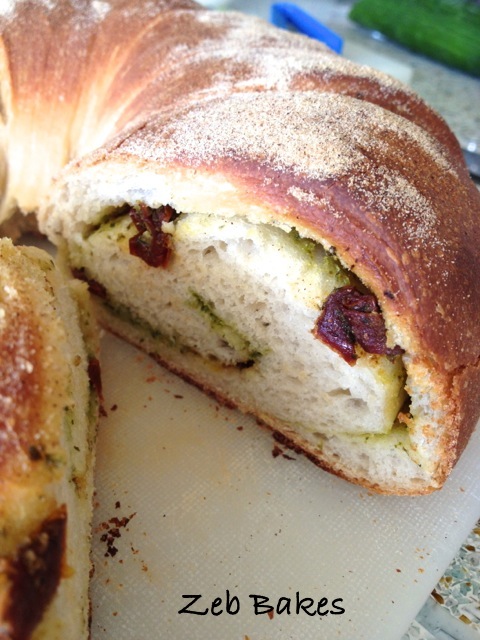 The Dan Lepard fan club knows that in his repertoire of awesome buns are some absolute treasures to which one returns time and time again. My favourite three are the legendary soft white bap, the top teacake and our eternal favourite, the BBQ semolina bun. Known in this house variously as the duvet bread or the pillow bread because of the scoring to the top, I make this bread over and over again. The recipe for the Semolina BBQ buns is still available on the Guardian website and I don’t change anything at all when I make it.

Today I made a double batch and made a duvet with one portion. With the second batch of dough I thought I would try something a bit different for me. When the dough had finished its first prove, I patted and gently rolled it out into a largish rectangle and spread it lightly with some wild garlic, grated pecorino cheese, ground almonds and olive oil made into a pesto-like sauce and a few sundried tomatoes. I rolled it up gently into a sausage shape and curved it into a ring. I set it on a sheet of baking parchment on a tray and put it inside a clean bin bag to prove. Before baking, I slashed small slashes in the top and brushed it with water and sprinkled fine semolina over it.

The trick with doing this is not to squash all the air out of the dough when patting it out to the rectangle, use the flat of your fingers to start the process off. When you use the pin, roll as gently as you can from the centre of the dough towards the corners to get a rectangular shape, and take your time. If the dough is pinging back a lot, walk away for five minutes and let it relax before you try again; try not to compress the dough too much, you are sort of stretching and fluffing it, rather than rolling and squashing. I am thinking about the way I pat out pizza dough rather than use a pin, though that is of course a different dough and more delicate than this.

My dearest old neighbour from where I used to live came round for lunch and we ate in the garden, yes really it was warm enough to eat outside!! We were accompanied by the sound of building work from two doors down, visits from some very large bumble bees, and the grumbles of small poodles, but you know what, it was glorious!

Brian had bought an entire box of aubergines for the sum of £2.75 at the weekend and even though he gave two-thirds of them away we still had lots left to cook, so it was more swooning and more olive oil and more Imam Bayildi for lunch today. I changed the spices slightly this time and left the onions chunkier, using allspice and a very new hot smoked paprika. We are still swooning… and I promise not to mention it again, but it is really very good indeed.