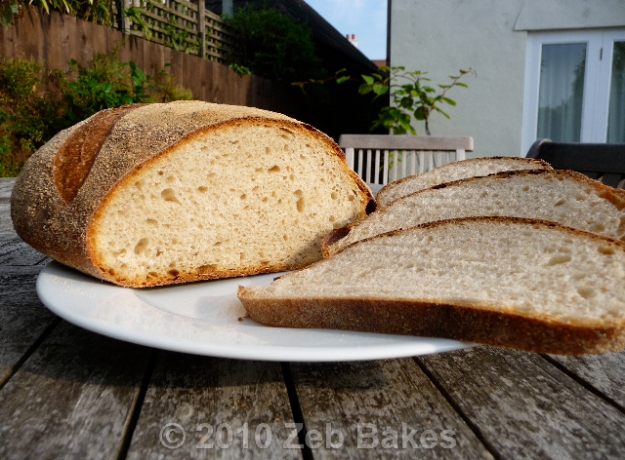 This is the famous sourdough formula from Bread by Jeffrey Hamelman. It’s a 65 per cent hydration pure sourdough made with organic white bread flour and a little whole rye, water and french sea salt and a liquid sourdough levain. 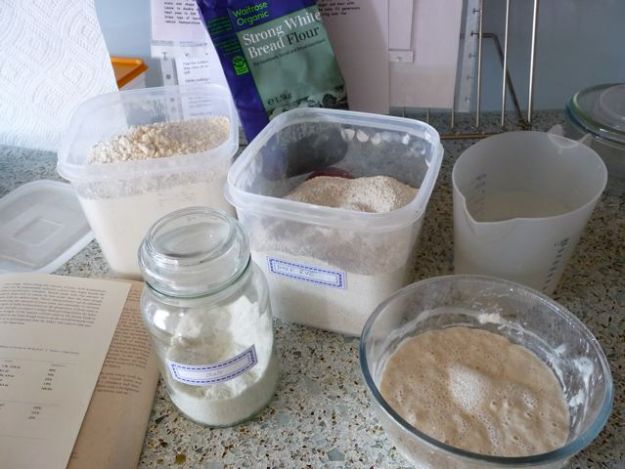 I rebuilt my usual white sourdough to the required hydration of 125% over 24 hours and ended up with a much looser and frothier starter than I normally use. I’m not sure that my palate can distinguish between a sourdough made with a liquid and a stiff starter. Hmm. 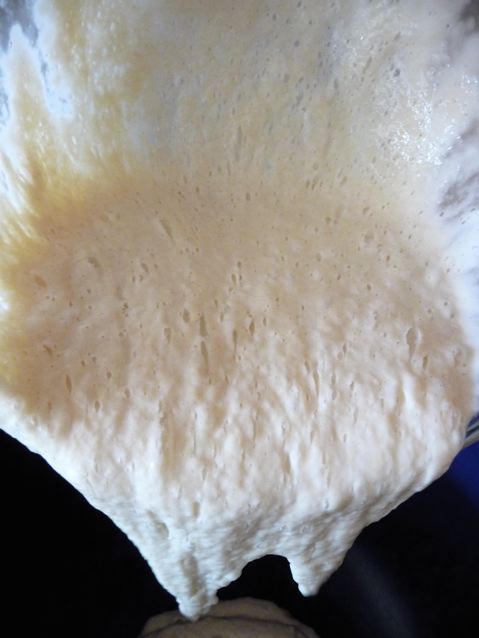 Usually I keep my starter at about 90 per cent hydration. I don’t bake every day, so I find it keeps better in the fridge when there is more flour than water in the mix. It usually sits quite happily in the fridge for about five days, then after seven days or so a layer of hooch appears on the top and if I am sensible I discard and feed at that point whether or not I plan to bake. The hooch takes much longer to appear on the rye starter, I don’t know why they are so different but they are.

I mixed the dough up and following the instructions, left the salt out and left the dough for 45 minutes before gently kneading it into the dough.  I used some quite coarse grey french sea salt which has a wonderful flavour. 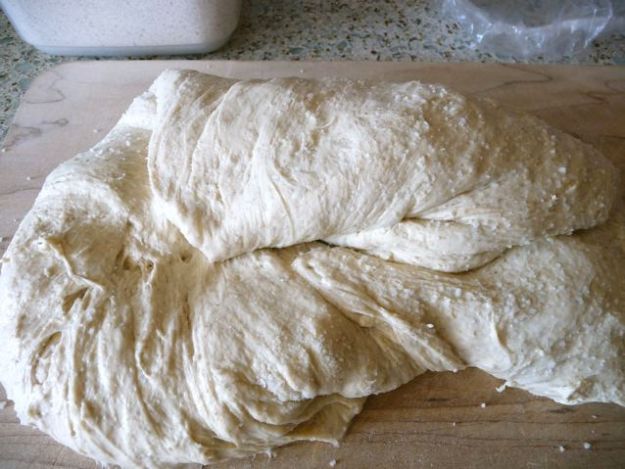 I was very interested to feel the way the dough softened and changed as the salt dissolved into the dough. Before the salt went in it was very tough and not very extensible, once I had worked on it for about two minutes I could feel it change, fascinating!  I did the usual light kneading and then I left it to bulk prove with one fold after 90 minutes. 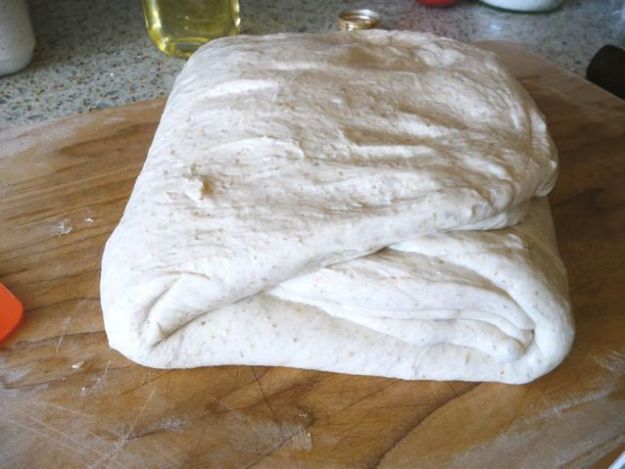 I made two 750 g boules, let them relax a little, shaped them again and put seam side up into  two linen lined bannetons heavily dusted with rye flour for the final prove.  Covered with shower caps and… 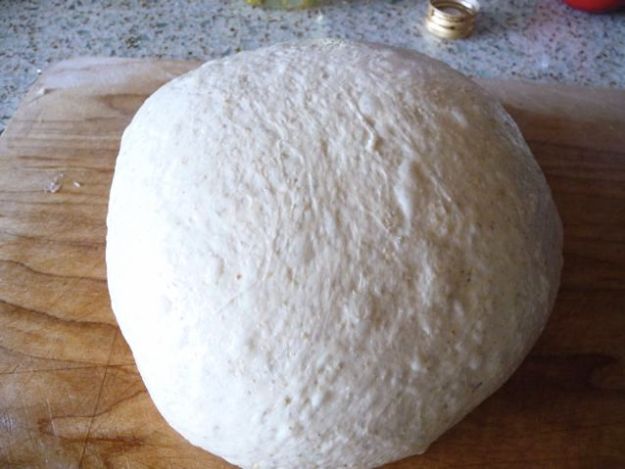 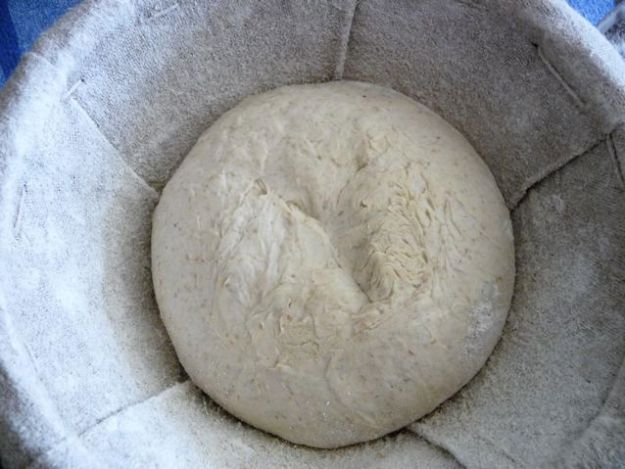 ..back to the poodling pool to throw squeaky toys and have a dabble myself. Pretty mellow for a very hot Friday afternoon in the suburbs…. a hot air balloon or two passing overhead… 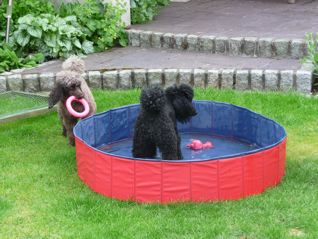 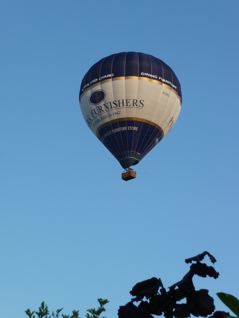 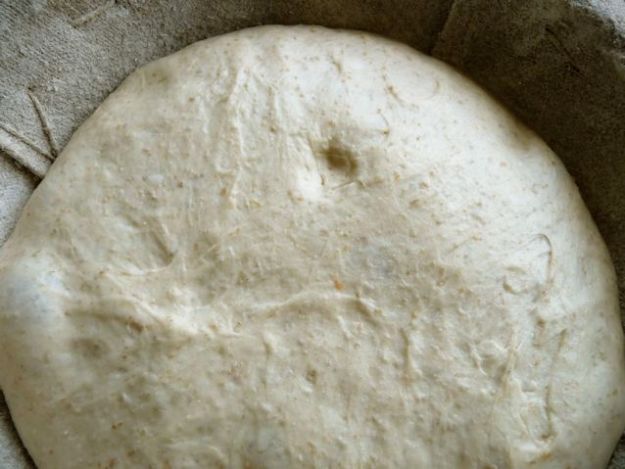 One of these days I will try and work out how to take pictures and slash at the same time, but this was not the day…sorry….

This time I thought, how about a J and a B. Can’t be too difficult can it? The S worked pretty well the other day, surely I can slash any initial on the bread.  Pride comes before a fall…..that was almost impossible. I need to go back and practice calligraphy I think. Not my finest moment, but hey you win some you lose some :) 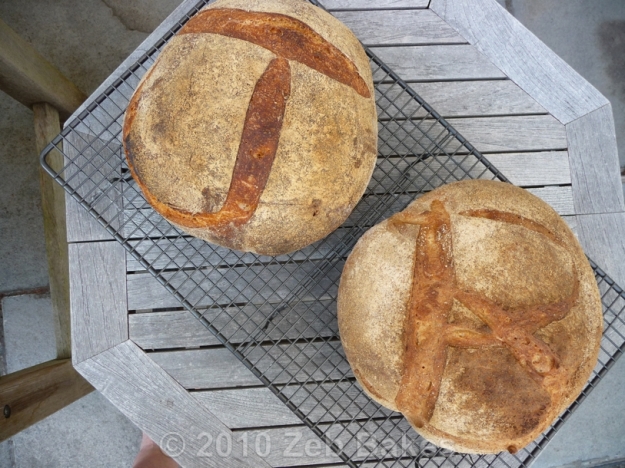 You can see the results here. So you see the S the other day was a fluke!

I had to bake the B in the top oven as there wasn’t room in the bottom one for two big round loaves.  I can’t get steam into the top oven easily and you can see the difference, I reckon J sprang about an inch more in height and the slash of the lower part of J opened up beautifully,, B looks OK but is not as well risen. Steam really does make a huge difference! Believe in the steam, get it into the oven somehow. Iron trays, spray bottles, japanese rocks. wet flannels, well maybe not the latter, but get the steam in there. It only has to be there until the bread has sprung and begun to take on colour, then you can open the door and let it all out again, it will have done its job. I also think something mysterious happens to the temperature in my oven when I go from 220 C to 230 C.  I certainly can’t use 235 C which is what JH’s temperatures translate to.  230 C gives the very dark crust you see on J and the flour on the top has caught slightly.

As this bread wasn’t retarded the taste was mild and cool,  a little dryer than the Bristol sourdough which has olive oil worked into the dough, with good umami flavours from the very dark crust adding to the general happy mouthfeel of this bread.  It’s the sort of bread that if you didn’t know it had rye in it or you didn’t know it was a sourdough you would probably not really think about it at all.  It’s just a good bread!

The notes that accompany the recipe are beautifully and carefully written, you learn so much from reading this book. Go on, join the Mellow Bakers and have a go at some of these wonderful breads. It’s easier than it looks, (apart from carving your name with pride!)  And, if you’re looking for the recipeso as to dip your fingers in the flour for the first time, try Susan on the WildYeastBlog.com site – her Norwich Sourdough is derived from the Vermont sourdough.