I used to be completely obsessed with cheese and onion crisps and I suspect I am not alone in this. So you are in for a rambling old post today with a recipe at the end if you keep reading. Golden Wonder were the brand of my childhood, now overtaken by Walkers I believe, who have coloured their cheese and onion packets blue which confuses me utterly, because in my mind cheese and onion will always be green.  The power of the brand is strong in my mental map.

I ate these every day on the 716 Green Line Bus that swooped down into Hammersmith Broadway on its cross-capital journey (from Welwyn Garden City to Chertsey and Hitchin)  and away to Kingston on Thames after a long school day.

Image credit:  courtesy of Alan Gryfe who has a wonderful collection of ‘E’ plate images on his website Eplates info.

Or that was the theory, in practice the bus turned up any time between 4.30 and 5.30, depending on the vagaries of the London traffic and crisps were a survival essential given that it could take hours to get home from school. The bus was a haven of comfort compared to the Red London buses, it stopped infrequently and sped importantly through London if the traffic allowed. The little rush of adrenalin when I saw its green front appear, and the corresponding dread if one saw it disappearing round the corner is indelibly associated with cheese and onion crisps.

I had a blogger’s déja vu feeling that I had told you about crisps before and the journey, and yes I have, more than once, ahem. In this Alphabet post about the letter C that I wrote nearly two years ago and they got another mention in this foodie post as well. I must like them, hey?

In short crispy onions are one of life’s small joys, pungent and anti-social maybe, but utterly delicious.

I found this tub in a supermarket (Danfood, presumably is a brand name for Danish Food) and I can’t remember which one, but I have looked and they seem to be available on line too.  You can get them from Scandinavian food online sites as well, various brands.  I have fried a fair few onions in my life and they never go crispy like this. And they take hours and I think life is too short to fry onions to a crisp most days. So buy them and enjoy them if you see them. Yes, they are processed food, but if you look at the ingredients, nothing strange in there.

I have adapted Emmanuel Hadjiandreou’s Cheese Bread recipe in ‘How to Make Bread’ and revisited Jeffrey Hamelman’s Cheese Bread recipe figuring out how to make these.  I have used yeast in mine as I wanted them to prove fairly quickly so I could offer them for lunch the same day I made them. You can either make them with all yeast or all sourdough or do what I did. If all yeast then add extra water and flour to your dough.

You will also need

I mixed the dough in a stand mixer but you can do it by hand of course if you prefer.  In a stand mixer it is preferable to put the wet ingredients in the mixer first, combine those and then add the dry ingredients.  Traditionally by hand you would put the dry mix in the bowl and then add the liquid into it.  Stand mixers tend not to pick up a layer of flour at the bottom of the bowl so that is why I do it this way round.

Put the sourdough starter and water and olive oil in the mixer and mix for a minute or so.

Tip the dry ingredients into the bowl and mix for about two minutes on the lowest speed.

Take the whole lot out and put into a lightly oiled bowl, cover and leave to rise in a warm place until it has risen by at least a half. This took about two hours the other day. If you want a quicker rise, increase the quantity of yeast you use.

If you want to give the dough a fold half way through that is always a nice thing to do.

Tip it out onto an oiled worktop and pat it out into a flat rectangle with a touch of oil on your fingers.  Then fold it as if you are folding a piece of paper into three to put in an envelope. Turn the dough through 90 degrees and repeat the fold and you should end up with a nice mounded up piece of dough.

When your dough is nice and puffy, and you can feel little bubbles being busy if you press the top gently, (maybe another hour or so of proving)  grab a dough cutter and cut it into 9 or 10 even chunks. Mine weighed in at around 80 grams.   At this point swap away from using oil on your hands and worktop to flour.

Gently pat each chunk out a little and then pick the sides up and bring them to the centre spot, turning the dough around as you go to form a ball, like making a pouch almost. Then turn the ball over and make a cage from the heel of your hand and your fingertips and keeping your fingertips and heel in contact with the worktop, rotate your (dry floured) hand so that a nice even ball forms inside your hand. You will feel the doughball contract and mysteriously start to spin in the other direction from the one your hand is going in when it is done. If this sounds like gobbleydegook, I suggest looking up forming dough balls on You Tube and I am sure there will be several videos showing you what to do. Or of course, just do it the way you always do it. More than one way to roll a ball of dough!

Place the balls well apart on a dusted sheet of parchment on a baking tray, dust the tops with flour and leave to prove in a large bin bag. The bin bag acts as a quasi proving chamber, keeping the tops of the dough balls moist.

Leave to prove again in a warm spot till they are well risen, maybe 45 minutes or so.

Preheat the oven to 200 C. I use top bottom heat for nearly all my bread baking as I don’t get on with the fan setting as it tends to give me an uneven bake in my home oven. The equivalent fan setting would be I suppose 180 C but you know your oven best.

Place a small tray on the rack below the one you are going to bake on and fill it with boiling water as you put the rolls in the oven. 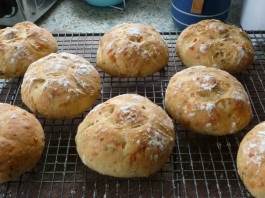 Bake till lightly golden for about 20 – 22 minutes. They will be very soft when you take them out of the oven so you can’t really do a tap test on them. Leave them to cool on a rack if you can bear it. I have done two batches so far, the first batch were slightly bigger, I might have used more sourdough starter and I tried to print them with the rosetta roll press, but it didn’t work that well.

The second batch looked like this, I think I left them for an extra minute or two in the oven, so you can see they do vary a bit according to how long they get.

By the way for American readers, crisps  in the UK are what you call chips, whereas chips in England are what you call fries – I believe there are finer distinctions in Australia and New Zealand too. So many names for a sliver of fried potato. – vive la difference!