Skip this post if you don’t want to read a grumbly rant….or just check the pictures and move on…..

Too hot for Zeb

One of the biggest challenges for home bakers in this ‘connected age’  is trying to figure out whether the recipe they read on a website on the other side of the world will actually work out translated to their own kitchen. I know some of you out there are brilliant at adapting recipes, but it is not my strong point I will freely admit.

Translating technique and methods are relatively easy, but types of flour, sugars, flavourings, not to mention cuts of rye grain, salts, butters and other fats, vary so much that it gives rise to a lot of discussion. All the forums are full of posts on this subject.  Hunting around on the internet for someone who supplies einkorn is a harmless way to spend an evening and I suppose it is educational to try and work out  just what is the difference between farro and spelt and pondering the mysteries of OO flour.  Is it soft, is it hard, are there different sorts. I suspect there are….

And then a lovely visit to one of these restored mills where you buy a bag of their flour, get it home and realise there is no info at all on the bag to give you a clue about its composition, does this strike a familiar chord?

So I salute  home bakers everywhere, who struggle to overcome these obstacles and I offer my heart felt encouragement to those who are just starting out. It does get easier, and most people manage to make a damn good loaf by their second or third go.  Keep the faith. Like learning to dance, everyone gets better with practice, and bread is no different.

In breadmaking it seems as if each country has not only different names for their flours, but also different ways of describing them, ash content in Germany, protein levels in England, W and P in Italy (no idea at all what that refers to) and for the most part, the aspiring home baker has to make their best guess, scour the internet for advice, and then close their eyes and just jump in.

Bread though is relatively forgiving; unlike cake. This brings me to my rant:

I’ve just been testing some cake recipes for an American baking book, and realise that I am far from being a professional tester and that I don’t really like doing it. Hmmm.

I have managed to produce, with one exception, rather horrible looking, oversweet and dense cakes,  some of which I have turned into crumbs;  the rest sliced up and shoved in the freezer, vaguely thinking that I can use them for trifle or something, one day in the future.   I could blame the recipe writer but that’s a bit too easy.

One reason for my failure is I don’t have cake flour, special American bleached low protein stuff.

And before you comment that it is possible to make cake flour in the microwave, or substitute cornflour for part of the flour, I have read all that too, and, Dear Reader, I don’t want to play.

I realise  what I really  want is recipes written for me, here where I live, using ingredients that are easily available and preferably already in my cupboard.   I might go across town to get some seasonal mangoes, or to a specialist butcher for marsh-raised lamb, but I am not spending hours with flour exploding in my oven, nor do I want to feel deflated when cakes emerge from the oven and look as if an invisible imp has sat on them ten minutes later.  There, got that off my chest!

I also have to learn to look at a recipe more critically before I even start and say, 130% sugar to flour – no way is that going to make me happy. My teeth are furring up just at the memory of that particular cake.

Roll on Dan Lepard’s British Baking book, I hope it’s full of wonderful,  overlooked and neglected British breads, cakes and buns. And Mick Hartley‘s first book too! I can’t wait to read the recipes for his awesome flatbreads and other extraordinary creations.  Breads with a hint of spice,  redolent with fruits, studded with chocolate, a twisted shape here, a glistening crust there, a splodge of jam, savoury, oats, barley, and rye,   full of beer, I don’t care  – bring them on – I’m waiting!

In the meantime here, with many thanks to Suelle and all the other kind people who made suggestions,  is my alternative Battenburg.  The chocolate part sank a little and the pistachio part is a bit crumbly and I guess the recipe needs some fine tuning way beyond my capabilities, as I am not going to make the same cake over and over. 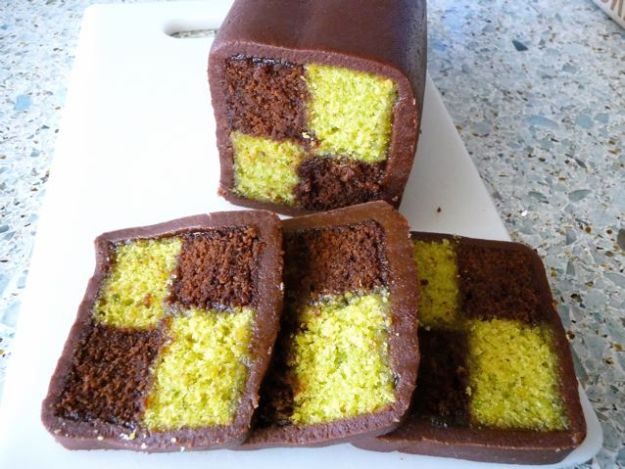 I could have souped up the green colour but this is how it came out!

But I have tried and now I am going back to bread, where I belong.  See you in the sourdough corner soon!