This is one of the November breads that the Mellow Bakers are baking this month.

I baked this for the first time last year and these photos are from that bake. I am sure I can do better, but I don’t know if I will get round to it this month again so I thought you might like to see this early attempt.

If you remember the post about obscure objects of desire, then the experience of baking this bread definitely fits into that category. Why? Borrow the book and read the story about this bread and you will want to make it or maybe just dream about making it.  I fell in love with the whole magic of bread baking when I read this the first time,   I simply wanted to be there and watch the process, to see and smell the breads coming out of the oven, understand the way it was done and then try for myself.

Technically, this is not a pumpernickel as Germans know it, because it doesn’t have enough rye in it. German bread regulations are very clear on the subject.  Here in England and I guess on the other side of the Atlantic too, the rules about what you can name a bread are ‘fluffy’. The subject of another post maybe?

The Horst Bandel black rye bread and other similar breads are often baked in a pullman tin. One of the mysteries of the baking business in England is that loads of breads are baked in neat long flat topped shapes, you see them everywhere bagged up on the supermarket shelves, but for a home baker to get hold of one of these tins with its sliding top is not such an easy task. 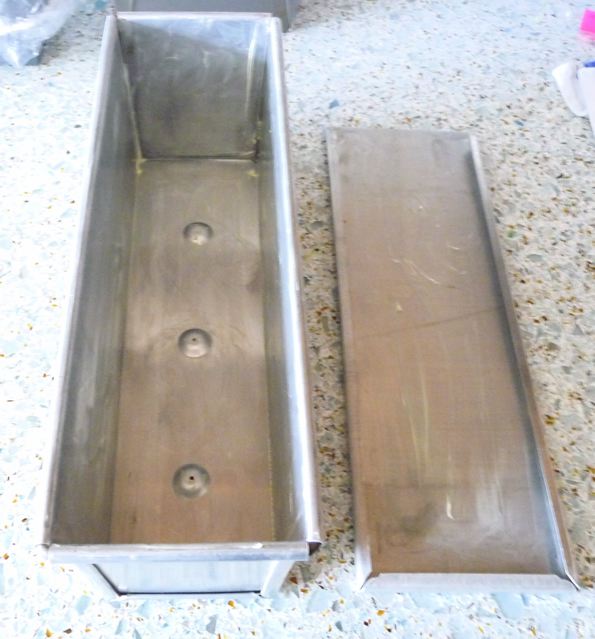 In the end I bought the one on the left on Ebay – it came from Malaysia. And then this year I was brought one from France by lovely Mike, courtesy of Yolande.  They are expensive bits of kit for the very good quality ones,   so unless you are sure you really want to make lots of square flat topped breads, I wouldn’t put this tin at the top of your ‘must have’ list.  You could always put a baking sheet on top of an ordinary bread tin and weight it down in the oven with a casserole or something like that.

The formula asks for ‘rye chops’ and ‘rye meal’ . These are different cuts and grinds of rye. English supermarkets usually stock one variety of rye flour if you are lucky. No choice at all as to grind, you can’t usually even get light and dark rye.  My friend Mandy came to the rescue and brought me lots of bags of rye from Germany in different grinds, though we were both guessing what was required. Nils at Ye Olde Breade Blogge advised me too and took a picture to show me what coarse rye meal looks like in his Saftig Kerniges Roggenbrot post. Nils is brilliant on rye breads!

So rye meal, is very coarse ground rye, but it is ground. Rye chops, as I understand it, is the whole rye grain (or berry as some people call it) cut into three or four pieces, so the inside of the grain is exposed and can therefore take up moisture more easily I suspect.

Shipton Mill at one time had chopped rye for pumpernickel, but the last two times I have asked they didn’t have any. I think the answer is not to get to hung up on all this but to try and source some whole rye grain and some good fresh rye flour and just have a go if you want to try this one.

The formula also calls for one of my favourite ingredients ‘an old bread soaker’. Ugh, I hear, you say,  putting stale bread in a new bread, what is that about?  Trust me, it works, it’s delicious.

I posted one of my favourite bread recipes here which uses an old bread soaker if you want to try an easier bread than this one to see how it goes. Obviously don’t use mouldy bread, just next time you have a good sourdough going and you have got to the end of the loaf, put the end in the freezer, chopped up and then when you want to make a bread calling for an old bread soaker you will have it to hand. It adds buckets of flavour and is quite common in Germany, where once again there are rules about how much old bread can be added to a new dough.

I reckon I did OK on the mixing and the soaking and the cooking of the grains and so on. I came a little unstuck on the cooking of this bread. My oven couldn’t go cool enough I think. The bread when I finally took it out, was a little hard on the outside. I wrapped it up and left it for two days before cutting it, and the crust had softened a bit by then. It had the right taste, fragrant and sweet and dark and very substantial.

A bread to be sliced thinly and smeared with unsalted butter and topped with strongly flavoured sausage or herring, a little sourcream….a slice of egg, a sliver of radish….

I’m really looking forward to seeing what the others Mellow Bakers do with this recipe!

Edit: Ulrike, a very knowledgeable German baker, has made this bread today and from what she explains here I think one of the reasons that my bread went hard on the sides is because the pullman has holes in the bottom and allowed the steam to escape from the tin. So what is needed is a tin which has a much better seal than that ebay one. I am thinking of trying with my milk loaf tin. That is a lot smaller and has a clip that allows you to seal the bread tightly. And then I would have elegant round slices of pumpernickel….

Another Edit:  I have a poor memory!  I now remember this thread on the Fresh Loaf worth looking through before you start.  I not only read the early part of it,  I even commented about  maybe using a fish kettle to cook it in.  It looks like the discussion on how to bake this bread got quite intense later on.  This is a bread that arouses strong passions and feelings !