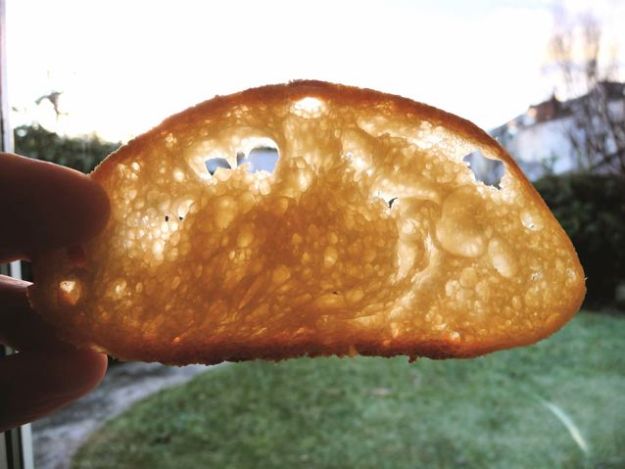 Another December bread for Mellow Bakers – I was going to leave this one for another time but found myself doing it anyway, encouraged as always by the enthusiasm of my friends!

I freely admit to having massive dough anxiety about high hydration doughs full of bubbles, heaving and slithering around the worktop, it reminds me of the fear I felt when I first watched Mickey playing The Sorcerer’s Apprentice in Fantasia on the big screen in Leicester Square at the age of four, just makes me want to close my eyes and wish hard that it will all go away.

The first time I tried this at home, it all fell apart when I tried to shape the dough, tucking the sides under and ending up with enormous seams of raw flour in the middle of the loaves. So I knew not to do that this time, whatever else I did.

The trick is somehow to find a balance between having enough flour  on the bench to control the dough, yet at the same time not letting that new flour get inside the dough pieces.  I think it’s something you almost have to do wrong a few times before you can figure out how to do it right.  A good soft paintbrush  is very useful in this context,  as are a couple of flipping boards. Flipping boards are easy enough to improvise from a piece of sturdy cardboard, ideally they  have an angled lip on one side.

This is what I did:

I made a poolish the night before with

… dissolved 10 grams of fresh yeast in 430 grams of warm water,  added that to 700 grams of flour, 19 grams of sea salt and started to mix. My flour is pretty thirsty so I added more water, which I didn’t measure, until the dough was loose and soft, no point in making something like a baguette, which is how the dough felt when I first mixed it, far too tight. So sorry Mr Hamelman but my hydration was considerably higher than you suggest, at least  another 50 – 150 grams of water on top of what was in the formula and maybe I should have done more.

Oiled an Ikea box, poured the dough in and put in the airing cupboard. Folded after half an hour, bubble bubble, and again after a half an hour, then left it for an hour, another fold, and then after one more hour  (three hours in total) the fun began.

The dough was heaving and frothing like an underwater whirlpool full of giant jellyfish. After heavily dusting my board I poured the dough out, sprinkled more flour on the top and cut it with a dough cutter into pieces. I narrowly escaped the whole lot flowing onto the floor and making a run for the door at one point. Life can be too exciting in the kitchen sometimes.

Calmly throwing flour everywhere, including all over my shoes, I got the situation under control though.

Given that one is trying to preserve the bubbles to get that open and airy crumb that one associates with ciabatta, I decided not to scale the dough.  (That’s what I tell myself now anyway as I write)

I  cut the dough into rectangular pieces and handling them as lightly as possible, tried to straighten them up a little. I like ciabatta to look casual, I don’t expect to have perfect rectangles which is just as well as I don’t think I could make them!

They got proofed where they were, I wasn’t crazy enough to push my luck, and plopped more plastic boxes over the boards and then after an hour or so, having heated the oven to 240 C I used my little flipping boards to get them onto floured parchment paper on trays with a flip and a flop as fast as I could and into the oven.

Baked for about 35 – 40 minutes with steam. I cracked the oven door after about 25 minutes to let the steam out.

The crumb definitely has that ciabatta mouthfeel, open and airy, the crust thin and crispy.  The holes could be bigger, but given that my objective was just to get through this formula in the first place, I was quite content. The damson jam fell deliciously through the holes when I had a little toasted for breakfast.  The ciabatta is perfect with cream cheese and beetroot relish. Happy again!

I do think the bread would have benefited from going in on a hot tray or stone as there is a heaviness along the bottom edge of the crumb which you can see clearly,  but that would have involved more moving of the dough and I wasn’t up for that. I could maybe have extended the final proof by half an hour or more. All things to consider next time!

Anyway I feel less like Mickey and more like someone who can handle wet dough,  nothing like facing up to your demons.  Now I really want to make this again using a softer flour; I have some T55 in the garage which could come out to play next time!

A little bit of sidetracking here ….. I am not a huge Queen fan normally, but Tipsy Mcboozerton (what a great name Tipsy) has done a fantastic job on the original cartoon posted on YouTube… and if you want to see the magic in the skies this winter, have a quick peek at this totally beautiful diamond dust sundog extravagansa on Les Cowley’s wonderful site. Another kind of magic!

20 thoughts on “A Trembling Trough of Ciabatta”