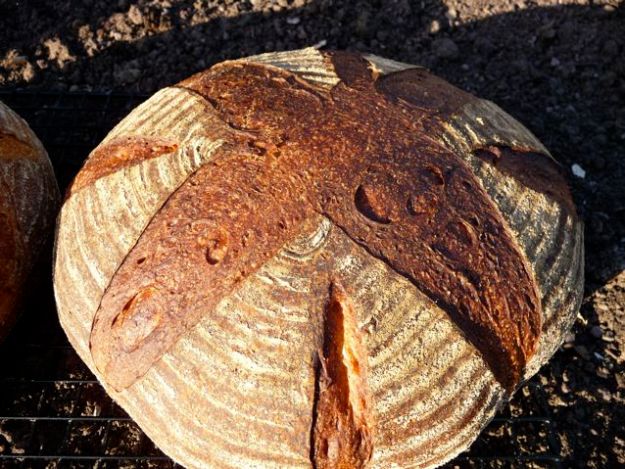 This month the Mellow Bakers are tackling  a traditional  style of sourdough loaf from Bread by Jeffrey Hamelman which is described as “emphatically French”.  As far as I can tell, this bread differs from the Vermont Sourdough breads we made last year mainly in that it uses a ‘stiff’ or firm sourdough starter rather than a liquid one.  Now my taste memories aren’t that good that I can remember exactly how a bread tasted last year when faced with a new slice. To my mind these pains au levain came out a little bit more sour than the Vermonts, but that could be down to to other factors. It’s really hard to know without controlled test baking! There are three different versions of this bread in the book, I have done two here, the Pain au Levain and the Pain au Levain with whole wheat. 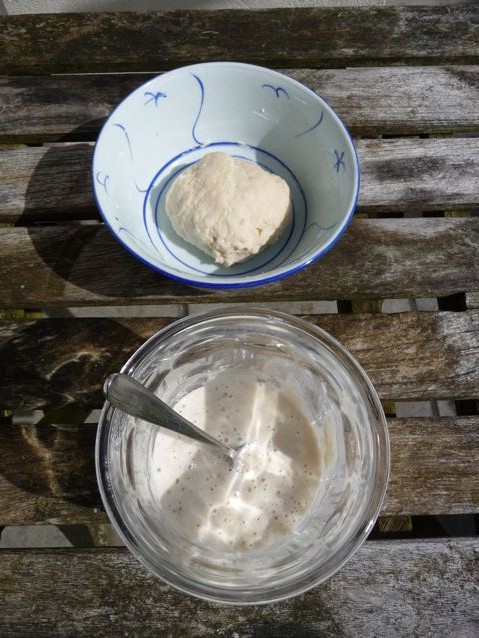 The main advantage as far as I can see in using a stiff levain to raise the bread is that a stiff levain takes up less space than a wet levain and ferments more slowly.  It may well have a different flavour profile and other more complex characteristics but they are beyond me at the moment. The disadvantage is, as I have mentioned before, and as Melanie noted in a comment here,  that it can be hard to tell when the stiff levain is ripe. I have taken a  photo for Melanie  to show what the stiff levain looks like when it is ripe. The levain expands and looks puffy.  When you open it up you can see a clear network of gluten and bubbles.

In the earlier post I described converting my 100% starter to a stiff starter.  A 100% starter, for anyone dropping by, is shorthand for a mixture of live natural yeasts and bacteria, flour and water, in which the proportion of flour to water is 1 :1 by weight (not volume). e.g. 100 grams of flour to 100 grams of water.  Some bread recipes call for much more liquid starters, some for dryer starters and if one is trying to stay true to the spirit of the recipe then one should play along, at least the first time you bake the bread.

To recap I made a quantity of stiff levain or starter

by converting my 100% starter to one with a 60% hydration. So 10 grams of the original starter plus 24 grams water and 40 grams flour. That’s about as close as I’ll get without ‘A’ level maths. 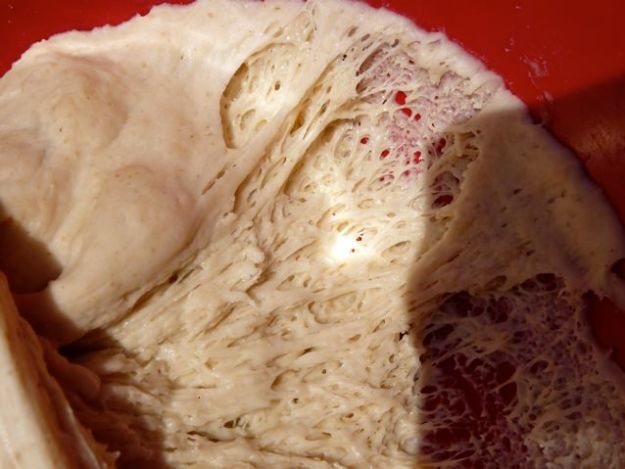 I did this again around midday, discarding what I didn’t need,  and then in the evening I built the levain to give me enough starter to make both the Pain au Levain and the Pain au Levain with Wholewheat flour. I have rounded up and down figures to whole numbers here to suit myself.  For the original formula you will need to get hold of a copy of the book which I would recommend anyway. The levain build was created as follows:

Double refreshments definitely give you a more lively and active starter if you have the time to do them.

Early the following morning I weighed out the flours for the two loaves.

Each was mixed with 280 grams of water and left to autolyse* for an hour. 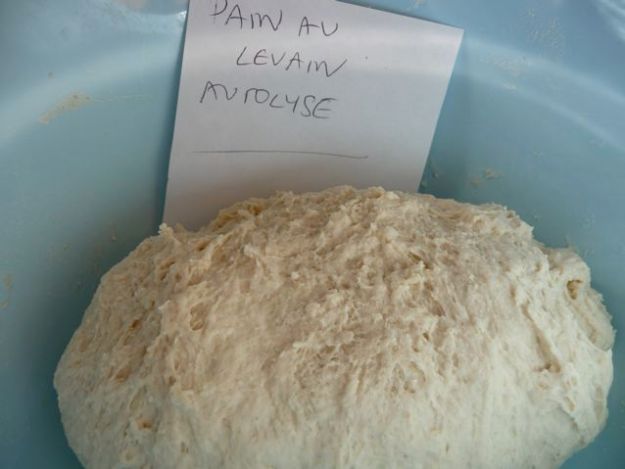 After an hour had elapsed, I took each dough out of the bowl and stretched it out, sprinkled 9 grams of salt over the surface, and snipped 125 grams of levain for each dough into pieces and spread it over the stretched out dough. I didn’t use the Kenwood to mix these doughs as the quantities were relatively small. I had a small quantity of stiff levain left over which I used to make a sourdough pizza dough  (more of which in a future post).

I then mixed and kneaded the dough for about five or six minutes to get the levain mixed in evenly; doing a short knead on one batch, and then on the other, taking it in turns.

Once they were nice and silky and I couldn’t see any patchiness in the dough, I left them in lightly oiled covered bowls for a total of three hours, stretching and folding them three or four times during that time. 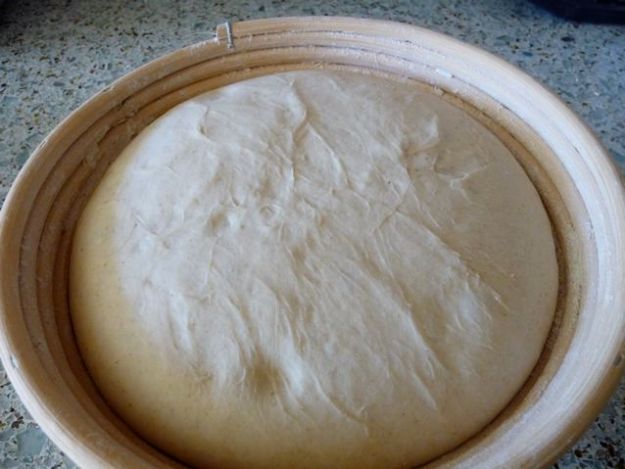 Here the dough is proved and ready to bake

After that I shaped each dough into a rough boule using a little flour, left for a further twenty minute rest. Reshaped the boules more tightly by cupping my hands round the boules and dragging and turning them across the worktop.

Once I was happy with their forms I put them upside down into floured bannetons and left them covered to do their final prove. I put one in a cooler part of the house to prove a little more slowly as I planned to bake them one after the other.

I baked them about three and a half hours later after slashing them with a razor blade. 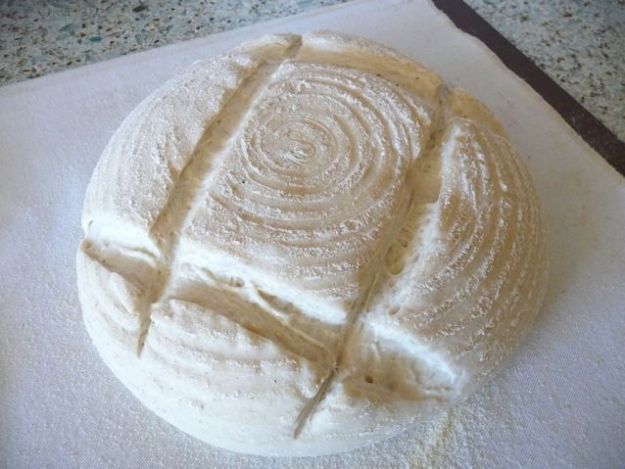 Proving times vary so much from week to week and it really is something that comes with experience. If you want to bake faster, you need to mix the dough fairly warm using warmer water, and have a warm proving place. It can be done;  you get good bread with a milder flavour than you get from the longer proves. You can of course also use a little yeast to really speed the process up should you need to. It’s your bread, you make it the way that suits you! 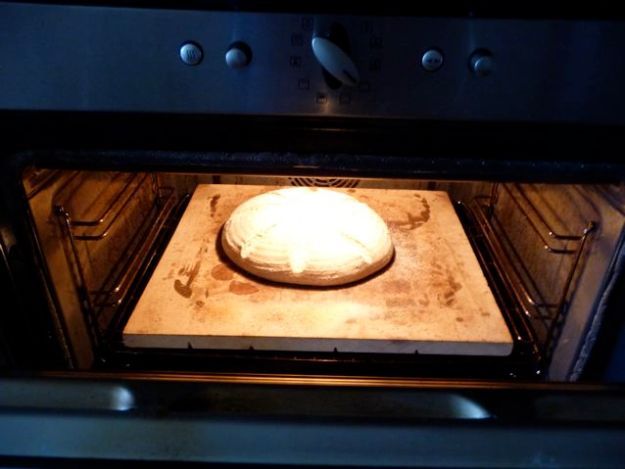 I baked the loaves on a kiln shelf preheated to 230 º C with a steam tray beneath. The first loaf I remembered to turn the temperature back after 20 minutes, the second loaf carried on at full temperature and turned the colour of an old mahogany table. Both were baked for 45 minutes each. 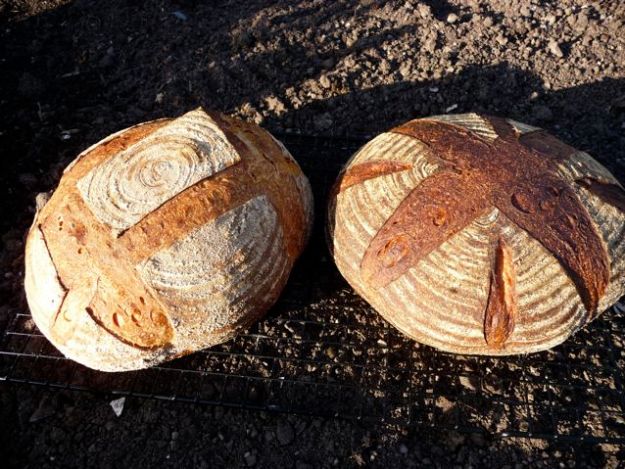 My thoughts on these breads:-  The dough is quite firm and I was surprised to see that the crumb was still quite open and airy. This gives you what I call a dry sourdough as there is no oil or fat in the crumb. It is an excellent keeping bread with definite sour notes and I like the texture and the flavour very much. 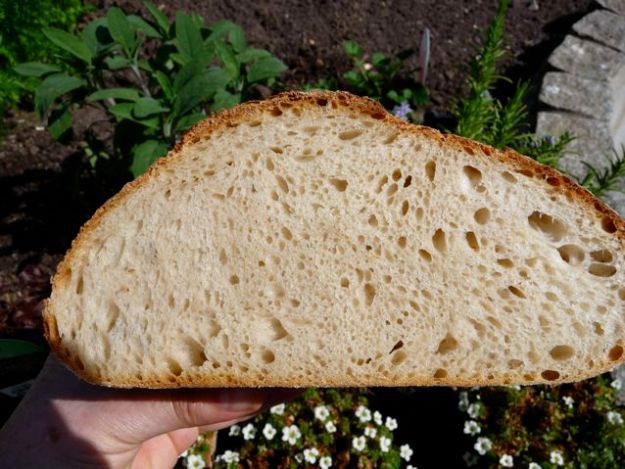 Crumb shows a well developed aeration through the whole loaf

Sourdoughs like these should last for at least four to five days and I often prefer them when they are a day or two old.  They are wonderful with all sorts of toppings, from simple butter and jam, to artisan cheeses, smoked meats, and cooked eggs. The bread makes crunchy toast and is excellent turned into breadcrumbs and croutons if you don’t quite get to the end of the loaf in slices. 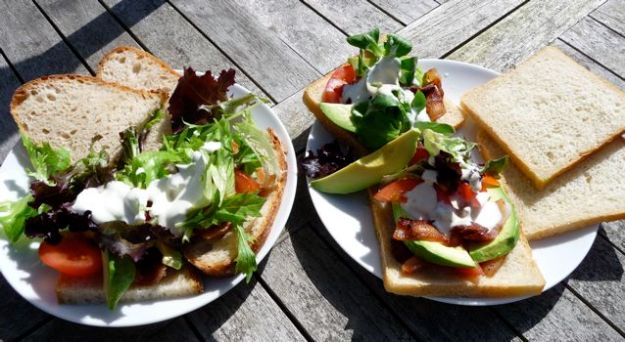 Pain au Levain on the Left and Brian’s bread on the right – crispy bacon, avocado and salad sarnies with a yoghurt and mayonaise dressing

As always, please join in, have a go at this or any of the other breads we are baking this month, there is a lovely hazelnut and fig bread that I’ve got my eye on…

Have a look to at what the other Mellow Bakers are getting up to this month. Geraint has set up his new website, a new business and still found time to bake all three of the Pain au Levain and Paul, now settled on the West Coast in his new home with his new oven, is getting back into the groove here.  Any questions about this bread or any others we have baked, either ask me here, or over on the Mellow Bakers forum where you’ll be more than welcome!

* A small footnote on autolyse

I  use the term autolyse to describe mixing flour and water only and leaving it for a period of time,usually an hour,  prior to adding salt or yeast/leaven. Other people use the term to describe various combinations of water, flour, salt and yeast/leaven. I find this confusing so I stick to the one usage of the term when I write up the breads I bake.