There is a game that people play in which they confess that they have never actually read a famous book or literary classic. It’s a curious game since it involves an admission of failure, and to win, you must have not read something that everyone else in the room has read. There are many books that I haven’t read, or ones that I have picked up and attempted and then simply abandoned, splayed on a side table, or rediscovered with a bookmark placed a telltale eighth of an inch inside, waiting patiently, as books do, for your return, only to be put on a shelf or recycled to the Oxfam bookshop.

One of these books is Proust’s ‘A la recherche du temps perdu’.  When I studied French at school I told myself that I would one day read this book in its original language and that would be the pinnacle of my studies. I think I managed all of five pages in French and then read a synopsis. I was completely mystified by the reference to tilleul (limeflower tea) and madeleines and fantasized wildly as to what it could possibly taste like to arouse such memories.  I tend to confuse that book with Madame Bovary, which I did read and so I have a vision of Madame in that carriage with a little cup of tilleul in hand, drops of  palest green liquor spilling onto her skirts while tiny crumbs of buttery madeleine cling to her lips, as the carriage rattles around the streets,  a conflation of French literature, food and tea…. (I can see those of you with good memories shaking their heads and tsk tsking…) 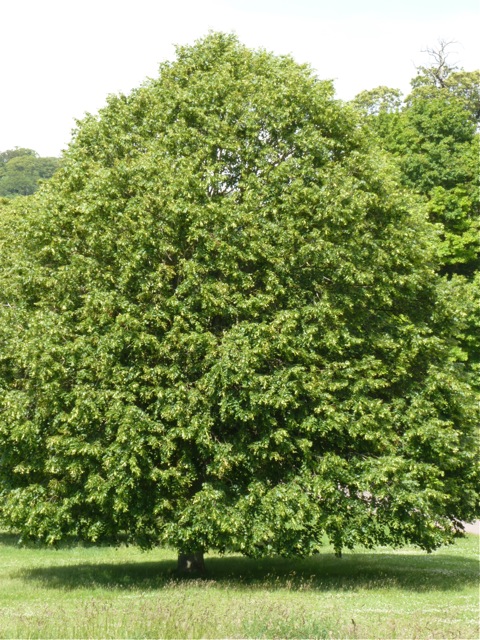 It’s high summer now in England.  The lime trees stand leafy and proud in the public parks and estates in Bristol and on many city and small town streets all over the country. The ones on the streets tend not to swoop down to the ground as their lower branches are cut away and they have their tops reduced but the ones in the parks grow unchecked and are quite magnificent. They are the family of trees called in Latin tilia, (not the citrus lime)  of which we have three species here.

When the sun comes out, the honeybees work their way from one cluster of blossom to the next;  standing under the drooping flowers,  breathing in the wonderful smell of lime-blossom and listening to the busy scratchy hum of the bees you can be quite transported to another world – one of green sweet scent and dappled light.

A while ago I read a recipe for madeleines and had a go at making them.  They all stress the importance of getting the ‘nipple’ or hump in the back of the madeleine which is part of its traditional shape. Shell like on one side and looking like it fits inside your mouth on the other.  I failed miserably and my madeleine pans went back into the garage, much to Brian’s sadness as he is terribly fond of little buttery sponge cakes.

I had collected some lime flowers and dried them to keep for tea as I imagine is still done all over central Europe and thought I should have one more go at making madeleines, how hard can it be after all?

I drowned quickly in madeleine recipes  (too much information out there on the ‘net) and picked this one to try from Joy of Baking.  I have altered the proportions slightly as I used medium eggs instead of large ones and reduced the amounts of sugar and butter slightly but it is obviously not that crucial because you know what? I did it. Luck maybe – but for the first time my madeleines have nipples!

To celebrate we took the newly arrived dragonfly Korento cups and saucers out into the garden, made a little pot of limeblossom tea and decorously sat and dipped and sipped and tried to fathom the mystery of food photography with my new camera.

Here is my version of these madeleines – I haven’t cracked how to stop them sticking in the moulds completely, the one thing I would say is try to get them out of the moulds as quickly as possible as they seem to stick more as they cool!

Madeleines (adapted from Joy of Baking)

Make tea, put on your crinoline and hat and find a horse and carriage, hop in with a friend.. no?  OK well just make the tea and get out in the garden and dip the cakes into your tea and pretend….

Thank you Marcel Proust and Gustave Flaubert for colouring my memories with limeblossom and delight and to Skandium and Signe Johansen for the charming iittala Korento cups with their dazzling colours and dragonfly motif.  I might have to treat myself to a matching plate for my next batch of madeleines, or maybe I should make some Swedish cardamon buns or some other delicious recipe from Scandilicious. Watch this space! In the meantime I have some limeblossom tea of my own picking to share with any visitors.

Who is the little gnome? She was made by my sweet friend Brydie at CityHippyFarmGirl, isn’t she a delight? 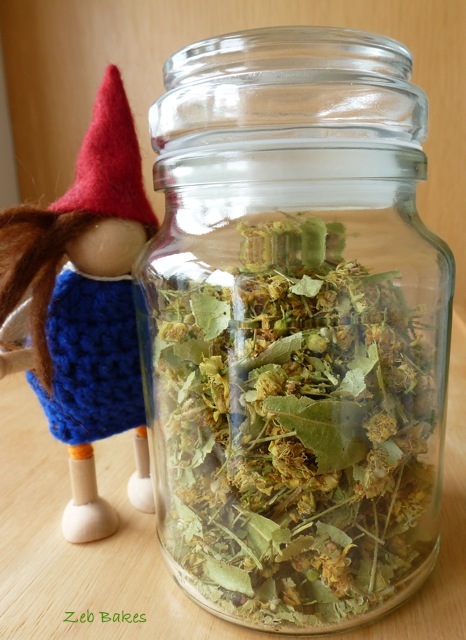 29 thoughts on “Limeblossom Tea and Madeleines”