The recipe is on the Guardian site for those of you who didn’t buy Saturday’s Guardian and here is the version I made yesterday.

It was a lot quicker than the other crumble cake and quite different in texture, which surprised me a little as I thought it would be more similar, but I am not that au fait with the effect of the small but significant changes of using cornflour and a mix of oil and butter. It certainly worked and was quite fast to put together too and used fewer bowls! All plusses for me!

I think I would give it maybe 45 – 50 minutes and start checking it at that point as when I stuck my skewer in at 55 minutes it came out clean as a whistle.

I used five little passionfruits as the ones I bought were very small (less than 35 mm across) and the only ones I could find and had a slight experiment with flavouring the crumble topping as we don’t like coconut in cakes and used some green ‘matcha’ type tea powder, but as Choclette says, maybe it wasn’t the best quality so the slight green tinge to the top is not really what I was after. Still it didn’t upset the cake too much (thank goodness) and it tastes surprisingly buttery, without too much butter in it – I wonder if that is the influence of the yellow hue from the passionfruit pulp making me think it’s more buttery than it is – and has the delicate aroma of passionfruit and a little crunch in every bite. 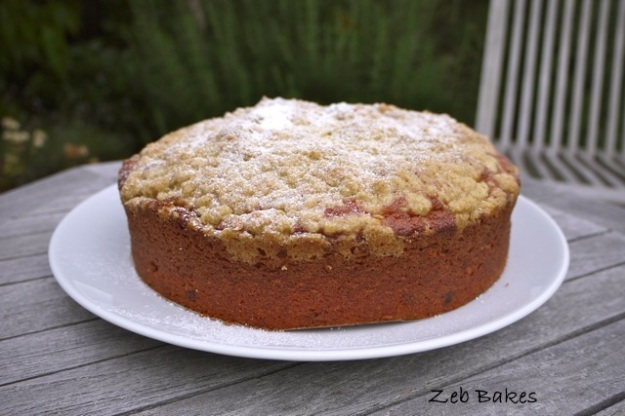 A fun cake to make and even more fun to eat! I just wish Dan Lepard would stop coming up with more and more recipes as I haven’t had a chance to bake from his new book Short & Sweet yet. I want to make the pastries and the cakes and the icing… and… mutter mutter.