The Shortandtweet challenge this week was buttermilk oatcakes or cheesy buttons from Short and Sweet by Dan Lepard. 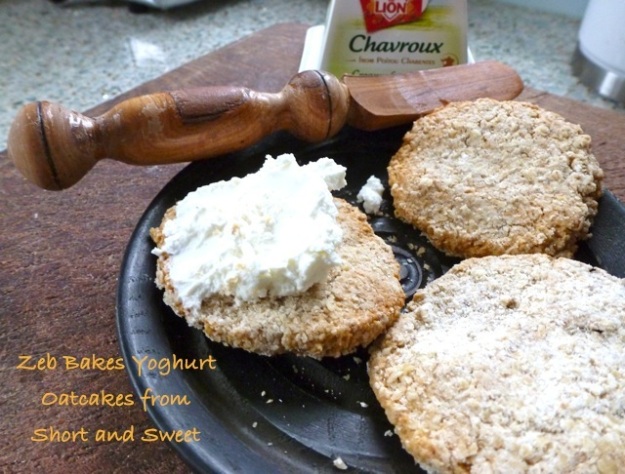 I made a batch of Dan Lepard’s buttermilk oatcakes, fitting them in between making supper and sorting out my friend’s Macs which had inexplicably locked her out. While I am useless at fixing my own, the God Geek of Tech smiled on me last night and I managed to get her up and running which gave me a big rush of happiness.

I used home made yoghurt as I didn’t have any buttermilk and it is given as an alternative in the recipe.

I split the batch and did half with no added sugar at all. I wasn’t sure how fine to grind the oats so I whizzed away, forgetting to whizz more for the shaping, but I hadn’t washed up the food processor so just did a few more. It makes a sticky moist mixture and it is very quick to put together.

I found it a bit fiddly to shape and messed around for ages. In the end I put a cutter over the mix and patted away at it through the top with the back of a spoon and then I pressed them out some more with my fingertips.

I baked on fan at 150 ºC but they were really not done after 25 minutes and I put them back again for another chunk of time. I really had no idea of how to judge when they were done, so going by golden edges I took them out and left to cool. They were still a bit soft in the middle when they cooled and the following day they are on the soft side, maybe that is the effect of the yoghurt? I think I prefer the oatcake recipe in the Handmade Loaf, but then I am a fan of Nairns Oatcakes, which are very hard and have a distinctive dry mouth feel and a slightly tangy taste which these don’t have, I wonder if more salt would do the trick for me and a longer bake. I will experiment some more when I have a moment.

I tested this little plateful just now ; very nice with some creamy Chavroux for a morning snack. Forgot to have breakfast (well that’s my excuse!) Healthier than chocolate digestives and quite moreish once you get going on them.

This week’s recipe is one of my all time favourite Dan Lepard recipes, top tea cakes! on Page 88 of the book. if you haven”t made these and love toasted tea cakes this is the one to go for. I love this recipe. Just love it!