I don’t have a lot of time to get this written up tonight so this is a speed post, half an hour flat out. I wasn’t going to bake this weekend but I found myself drawn into cake making, maybe by Mitchdafish’s delectable version of this cake here.  I scoured the garage for tinned peaches and came up with September’s home bottled pears and a tin of cherries. I checked with the others on Twitter what the drained weight of the peaches in the recipe should be, a great advantage of baking with other people even at the distance of the internet is that you can ask away and someone will say something helpful. Thinking about it afterwards, you just use what you have as the fruit goes on the top of the cake and doesn’t make a difference to the texture of the cake itself, providing you drain it, I am sure fifty grams more or less of fruit topping wouldn’t matter much.

I managed to locate the saffron that my friend Tom had brought me from Barcelona and activated it in boiling water. The saffron that I grew one year has long since been used. It has given the crumb of the cake a lovely pale yellow colour and I can’t detect any particular taste. Either the saffron is too old or I lack the saffron gene. I have noticed that before when I have used it, I don’t really know what saffron is supposed to taste like, if that makes any sense.

I added a couple of drops of a new bottle of almond essence from Bakery Bits. Some people like it, including Brian who voted to add it to this one when I waved it under his nose.   I am never that sure, it still reminds me of synthetic tasting cakes from my childhood, some people like that reminder maybe? I found a big 1kg bag of ground almonds in Licata’s, much fresher than the stuff that comes in the little bags from the supermarket and probably better value too. Whole almonds are always better bought in bulk if you are going to be using a lot of them. 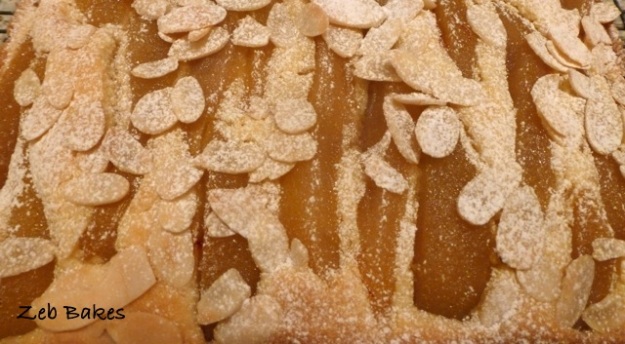 The cake itself was easy enough to mix, though I still managed to curdle the eggs. I should have warmed them up in a bowl of warm water first. ( I know the theory, but oh I am so lazy) It doesn’t have that many ingredients or bowls and I hope I baked it right, I have cut it while still warm and had a corner so I can tell you that it tastes of almonds and has a nice slightly dense texture, (maybe due to cutting it while warm, underbaking, curdled eggs, or maybe that’s how it is?) a bit like a lightweight Bakewell tart, which is kind of what you would expect. If you imagine it with peaches on top, golden fruit and golden crumb and a swirl of thick cream. I do apologise for the photos as the cake would glow more fetchingly if I waited till the morning and sunshine to snap it, but time marches on and I have to make risotto.

We are having it for pudding to follow a little mushroom risotto and steamed purple broccoli. There may be custard ! Edit: In fact, we had the cake with some of the pears from the bottle, chilled and swoony delicious in their amaretto syrup with a little soya cream. Small grunts of delight emanated from Piglet at the other end of the table…..

Forgot to say this recipe is in Short & Sweet by Dan Lepard. The original version of the recipe appeared  in The Guardian called ‘Saffron Peach Cake’ and if you don’t have the book you can search online for it.

Hope you all had a lovely weekend! What have you been baking?