I have just tried my hand at making Imam Bayildi, which translates as the Imam Swoons. A dish so divine when correctly made that it has a ‘certain reputation’.

I love Sally Butcher’s explanation of the name in her book Veggiestan and I wonder if I am alone in being sold on trying a recipe from the stories associated with it. I think that is one of the reasons I buy cookery books, reading about how the writer has come to choose their recipes, their knowledge about the ingredients they use, their memories and their passions is all part of the pleasure of the process. Often it is all I do and the dishes remain in my imagination, filed in a food palace somewhere in my mind.

One can search the internet for almost any recipe these days but there is something about having too much choice that can then put me off making the recipe in the end. A good cookery book (or a good blog for that matter) is far more than the recipes and photos contained between its covers.

I emailed Sally Butcher in Peckham where she has her shop which I hope to visit one day and asked her if I could write about her recipe, excerpted in The Guardian here, if you would like a taste of her writing and haven’t got the book (yet!) and she has kindly given me permission to babble on… so here we go….

The fresh tomatoes at the moment are not good and very expensive so I thought I would use canned ones. I suspect if you are doing this dish to look very pretty at a dinner party you would be better off using the best fresh tomatoes you can buy and chopping them up so that they show up better in the final dish, but I am not a food stylist and this was food for eating rather than taking photos of, though I have done my best to take some to share with you here. 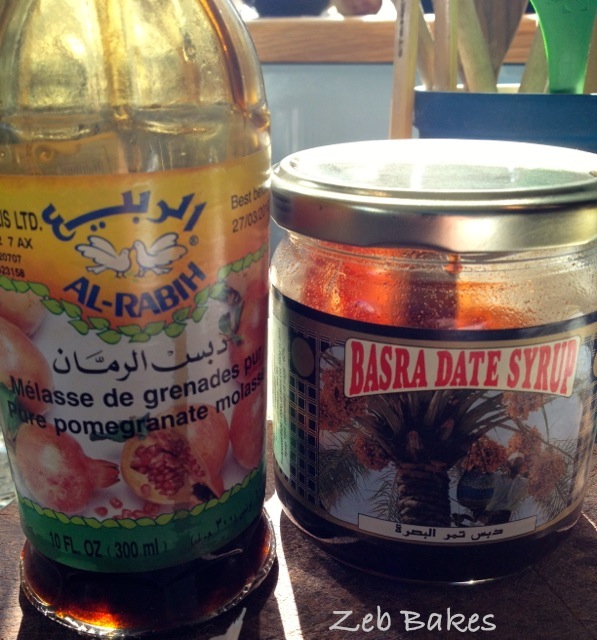 I did the recipe more or less as written. I substituted canned tomatoes for the fresh ones and I didn’t have pekmez but after looking it up (as it was new to me) I decided to substitute pomegranate and date molasses which I had in the cupboard. I also added lime juice to the dish. I used my melon baller to scoop the insides out of the aubergine as you can see in the photos below. I also baked the final dish off in the oven as I was worried that I would forget it on the hob and it would catch on the bottom.

I peeled strips off the side of the aubergines with a potato peeler. Cut them almost in half lengthwise but leaving the end with the stalk on and then I scooped out the middles with a melon baller. 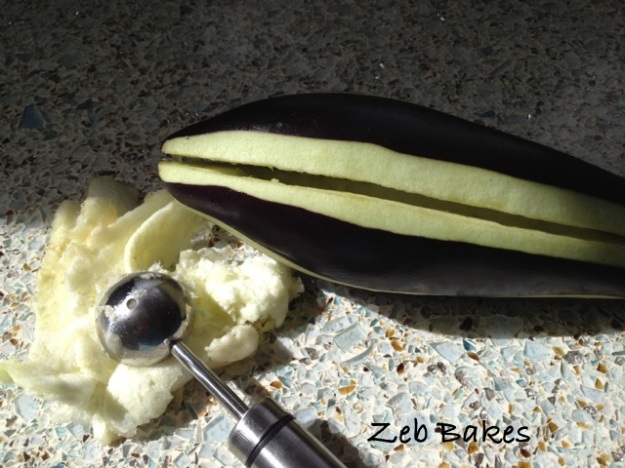 I then rubbed sea salt into the middles and left them to sit for about an hour while I went out with the dogs.

I am not totally convinced by this salt and drain thing, sometimes I do it with aubergines, sometimes not. These aubergines were young and had a greenish tinge to them, older aubergines are not green like these when you peel them. I would like to make this with those nice viola aubergines but I would have to trek across the city to see if I could find them in St Marks Road or somewhere like that. Come to think of it they might have pekmez there too…

I chopped up the onion and garlic and the middles of the aubergines in the little whizzer attachment which is my favourite small chopping device. It came with the Bosch wand that we bought a couple of years ago.

I then cooked the hollowed out aubergines for about ten minutes in oil on top of the stove, till they got nice and soft and a bit brown. I had to keep turning them over and moving them around in the pan.

At the same time I started to cook off the chopped up alliums and aubergine centres in another pan and then once the whole aubergines were cooked, took them out, put them on paper to drain a bit and then swapped pans. At this point the sun came out again!

To the filling cooking gently away in the pan, I added a 400 g can of chopped tomatoes, a little brown sugar, and a tablespoonful of pomegranate and the same of date molasses. I then squeezed half a lime in, followed by sweet paprika and finally seasoned with salt and pepper. I tried to keep the oil to just what I needed as I knew the final part of the dish involves a big swoosh of oil.

Once the mixture was looking partially cooked I stuffed the centres of the aubergines with it and squashed them all into my big old pot, spread the rest of the sauce on top and around and poured yet more olive oil over the top and some water and put in the oven to bake gently for about an hour at 140 C (fan). They weren’t done enough when I looked so I took the lid off and turned the oven up to 150 C and then they looked cooked, the aubergine dark and glistening and the sauce had darkened in colour, the way tomatoes do when they are well cooked.

I am all in favour of dishes that you can make one day which taste better the next and can sit happily in the fridge for a couple of days at least – and I am so looking forward to swooning away this evening when we eat this.

In the meantime, what bread should I make to go with it? Any thoughts?

Update: I made the Dan Lepard semolina buns and some na’an dough but ran out of time so we went with the buns – Pretty good! I take useless photos at night in the kitchen though… but this gives you some idea – wild garlic on the top from the woods too!

38 thoughts on “Imam Bayildi from Veggiestan”