I am a bad blogger, I have half-written posts whirling about in my head and none of them finished. I take photos of things with great bloggerly enthusiasm and then somehow the moment passes and I think you probably don’t want to see or hear about old stuff from the week before or even last month. Is blogging supposed to be in the here and now, is it ok to  backdate one’s blog life diary, even relate stories out of synch? How do you feel about this if you blog? How related to a personal timeline should a blog be? Would you as reader mind seeing photos of flowers that have now passed on to the great seed pod in the sky? 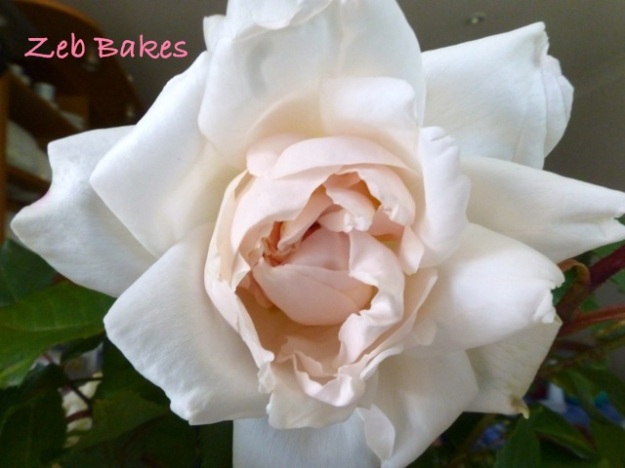 On a completely random note, I have just waded my way through the first of a two-parter on time travel set in the London Blitz by Connie Willis, called ‘Blackout’ and debating whether to read the second part; truth is I haven’t really engaged with the characters, maybe they will get more interesting if I wade through the second chunk of this.  The only thing I really want to know is whether they have to stay put in the 1940s or get back home; I always prefer it when people get back home in time travel stories.  I really liked an earlier story called’ Firewatch’ and her ‘Doomesday Book’ novel, which are all part of the same series, which is why I bought these two.  If you like time travel stories by the way, my favourite is one called ‘The Book of Kells’ by R A MacAvoy. I read the Connie Willis books because a friend of mine who is now dead, was a great fan of hers and so I read them for her and imagine the conversations we might have had about them once we had both read them.  We all have our own ways of remembering friends who are gone and this is what I do to comfort myself for the loss of this friend.

One thing I do know is that the book has given me nightmares of cities built out of red sandstone where the streets and buildings fall into holes in the ground and one can never find one’s way back to where one was, just keep on going and hope that somewhere, some place it makes sense. I know that this dream is in part derived from some of the passages in the book, but there are no bombs in my dreams, just huge clouds of red dust and buildings silently sliding into crevasses, of running up and down staircases, through courtyards, along passageways and corridors, pushing doors open and always looking for the people I have lost, out on the street, through a building here, round the crest of a hill there, I am exhausted when I wake up. Nightmares have a way of making waking reality preferable most of the time. 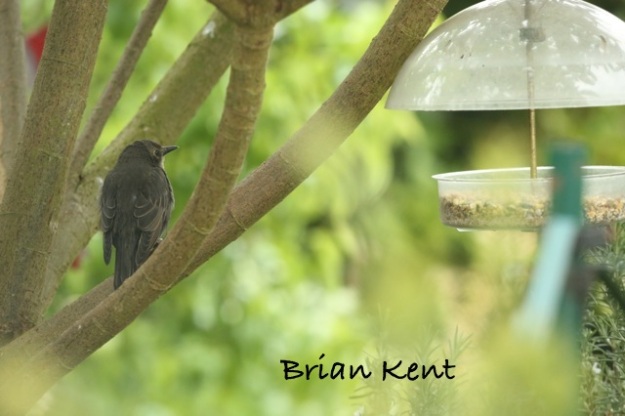 In my waking reality today it is Sunday and grey and a bit chilly with this strange North Westerly wind howling about round these parts, so I thought that this could be a two slices of chocolate cake sort of a day. (Did you like the way I steered this post away from the  books I read and the madness of my dream life to food?)

I made this rather wonderful choc chip Victoria Sandwich cake last night and it was too late to eat it by the time I finally did the icing thing so I have decided that today I can have yesterday’s slice as well. Flawless logic as ever.  →The recipe is by Dan Lepard ← and can be found on the Guardian’s website for Friday 21st June. I have been thinking about chocolate cake for a while now and how most chocolate cakes these days are squishy and dessert like which is great but sometimes I just hanker after a cake that is not made of pure chocolate, butter, eggs but has flour in it, the sort of cake you can carry off on a plate to a chair somewhere and eat without feeling you have just consumed a box of artisan chocolates that were very nice but you wish you had only eaten two of them.

This cake is,  as promised by Dan in the recipe,  chocolatey but not overwhelming. It is light and moist with a slight tendency to crumbliness, which I like. After all there is nothing quite like chasing cake crumbs around a plate either decorously with a fork or more prosaically with a damp finger.

I used a few bowls in the making ; there was a worrisome moment on mixing in the cocoa batter into the creamed butter and sugar as it looked a bit weird but after that it all came together and I am more than happy with the result.  If I were to open my garden for National Garden Day this is the sort of chocolate cake I would make for my visitors, in fact I would be happy to make it for anyone who came for tea.

I used four large duck eggs and half and half light brown and dark brown soft sugar as I didn’t have enough of either, Green and Black’s cocoa, and some Lindt dark cooking chocolate and a rather expensive tube of Waitrose own brand chocolate chips.

My oven temps are slightly different from Dan Lepard’s. The equivalent of Gas 3 on my chart is 165 C so that is what I used and I reckon you need about half the icing quantity to do this cake, but I don’t like an inch of filling and icing, less is more for me but… 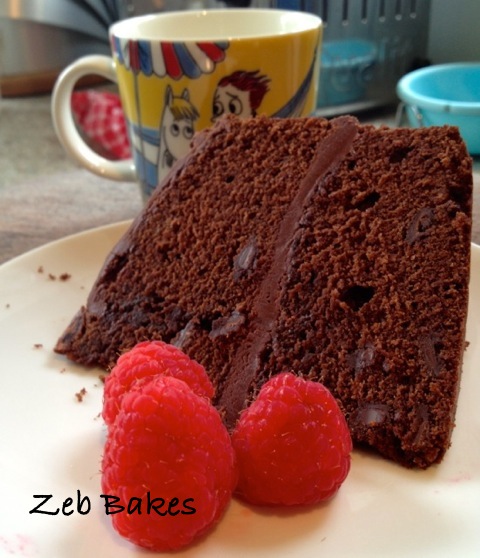 …excuse me, I have cut this slice and am terribly sorry but I have to go and eat it before the mouse carries it away. Life is very hard sometimes.

It’s been a grey and icy weekend here in Bristol. I have been out with YakTrax over my boots to grip into the ice, I am getting too unsteady on my feet to slide and skid, though I have fond memories of setting up iceslides on the street when I was younger and more bendy.  We have played briefly in the park, wandered down through the wood, kicked a few snowballs into the air to be blown to smithereens by jumping poodles, inspected a magnificent seated snowman hanging out on a bench in Quarry Park, and climbed over small saplings brought down by the weight of snow on their branches.

It is very quiet though, I have seen the neighbours but that is about it. So what better way to spend a few spare hours than to imagine you are baking with a friend? I suggested to Heidi @ Steps On the Journey that we have a go at TheLittleLoaf’s Chocolate Frangipane Tarts. I was seduced by TheLittleLoaf’s lovely writing and her gorgeous photography as I have been many times before, but usually I look, bookmark and say “I must make this” and then I forget. I am very forgetful.

The recipe we did can be found in its beautiful entirety on by cliicking here.  I am just going to include some pictures and notes from making it before they are all gone! 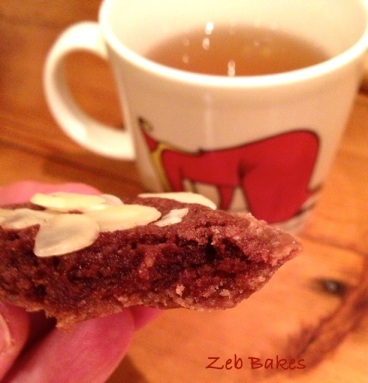 the thinnest pastry I have probably ever made!

This is a really clear recipe.  I don’t have tartlet tins with loose bottoms, which I realised when I read the recipe properly this morning, so I improvised with these tins which worked fine. 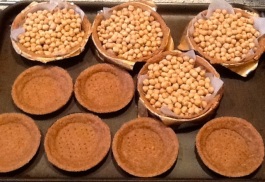 An array of improvised tart tins

I used all the pastry and filling and made 4 4” tarts which are bigger than they look and hold a lot of filling and 6 little flat 3 “ tarts which are more like a small flat jam tart. The hour in the freezer was the time out crunching across the icy wastes of suburban Bristol with the poodles. Brian commented that we could just have left them in the garden!

All puffed up out of the oven

I needed to adjust the baking temperatures to accommodate the different sizes, the big ones took a bit longer and the small ones less time, but I didn’t burn anything and I think they are cooked OK.

I wasn’t going to skate up to Waitrose to see if they had fresh cherries on a Sunday, so I carefully peeled some segments of clementines to try and stay true to the spirit of the recipe with a fresh fruit on the top. They look a bit 1970s don’t they?

I also finally used this little chocolate microwave melting pot thing that I got from Lakeland and it worked beautifully and I got a lot less chocolate over me than I do usually when I melt chocolate.

The fiddly part for me is always working with pastry, it really isn’t my strong point, but chilling it helps, and freezing it definltely stopped it shrinking while it baked, so I have learnt a useful tip there.

Anyway these are rich and delicious and everything a  dark chocolate-almond loving person could want in a tea time treat! Thank you Little Loaf for the recipe! I need to get better at presentation but I was so relieved they didn’t fall apart with their thin and delicate pastry that I was perfectly content with the results. And here is Heidi’s post, an almost simultaneous broadcast! Hee hee! I love blogging at times like this :)

from a recipe by thelittleloaf

For my friend Lynne – Get well soon!

It sounds so simple doesn’t it? Make a tray of little tiny spongy things, cut them in half, take out a bit of the middle bit, blob some marmalade in there, dip them in melted chocolate, take a photo, give to one’s true love who has asked for them. Well, let me say this. NO! It is not an easy recipe. No, no, no.