Last weekend we were once more in Pembrokeshire and one day we had a change from our usual activities and joined the tourist trail and visited this reconstructed Iron Age Fort at Castell Henlys.

We walked up from the carpark past a stream where Brian saw a goldcrest flashing through the trees with a group of other small birds; the verges along the path were aglow with cowslips, dandelions, emerging violets and early campion.

On the hilltop plateau swirls a curve of thatched Iron Age roundhouses; from small Zeb-sized ones, to massive ones where you can imagine how to cook, spin and dye, weave, snooze, mill grain, tend the stew pot and, work with iron age tools, share meals, talk and dream. The learned guide on site was utterly charming, she wears clothes she had made from her own weavings on her warp-weighted looms. However when I asked her about Iron Age underwear she laughed and went off to talk to some children.

When you are tired you could climb onto one of the beds and fall asleep. Outside you can turn your eyes skywards and watch red kites patrolling and swallows diving, there are little hairy piglets (a cross between ancient wild boar and a Tamworth) to talk to and woolly sheep ( a small old breed).

While we were there there was a falconry display with a collection of birds from a small merlin to a Russian Steppe Eagle. I had the dogs with me so we didn’t stay for the display as an eagle swooping low over your curly ears might not have been Zeb’s idea of fun. While this has been envisaged primarily as an educational open air museum and interactive site for children, there is  something for everyone to enjoy here and there is a new turfrooved visitor centre in the last stages of being completed which will I am sure enhance the experience for visitors later this year.

If you are visiting with children in the summer, it sounds as if there is a wealth of activities to participate in and enjoy. You can find out more about Castell Henlys from their website. dogs welcome on leads, and if you are curious how an Iron Age Roundhouse was constructed there is a fun animation to watch on the BBC website and a short piece you can read about Iron Age living here which lasted in Britain for about 800 years (from c.750 BC to AD 43). As you may know the Romans moved in shortly after that and stayed for a while.

Here is a gallery of some of our photos, a mix of Brian’s camera and my iphone to give a flavour of the place. Not the easiest of places to take photos in so I hope you get something from having a peek at them! 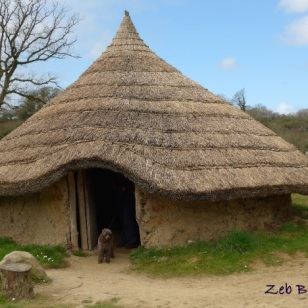 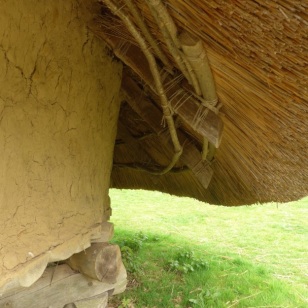 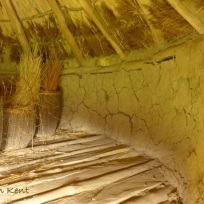 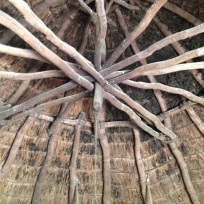 Trying it out for size 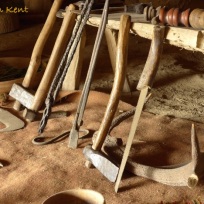 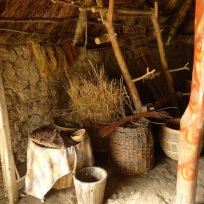 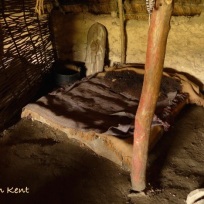 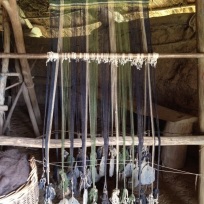 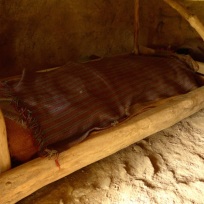 The heart of the home 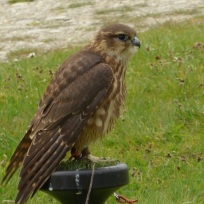 Sesame Crust Date Kefir Bread – this one gets better every time!

For those of you looking for kefir bread formulae, here is what I have been up to. I mostly make the loaf you see above as we both just love it!

I hesitate to call what follows an experiment because home baking is really not very scientific or rigorous as my friend Sally at the Bewitching Kitchen would probably be the first to tell you!

I have no microscope or lab to tell me what is really going on in there, just a basic idea that the kefir is a mixture of yeast and lactobacteria and probably a whole bunch of other things that I don’t know are in there !

I do know from using it and from observation that it is different in many respects from a traditional water and flour fed sourdough culture. The kefir cultures milk primarily, though it can be adapted to use other foodsources,  and is generally slower to do so than an active sourdough unless it is really quite warm. Why use it? Because:

If you culture the milk at a warmer temperature than my ambient temperature which varies from around 14 – 22 C for most of the year then it does go faster, gets very active and produces quite a lot of alcohol smells. I don’t particularly want the alcohol part so I keep the kefir cool and slow.

Most of the recipes for kefir bread that I have seen use some sort of sugar  product to give the kefir easy food.  No recipe for bread really needs sugar for yeast or levain to work, it is a choice you make because you want sweetness in the final product. Sugar in the dough promotes a deep rich colour in the crust and adds a caramel-toned sweetness to it. A sweetness that we don’t maybe register consciously but it is there. Really great bakers can get all that taste by careful selection of flours, manipulating the dough and the bake without adding sugar.

I came to kefir baking via Cecilia  @  thekitchensgarden.com who uses home raised honey in hers, I have been using date syrup in the preferment and this provides the kefir with a reliable and easy form of sugar food and this (as the loaf in the first picture above) produces my favourite of all the kefir breads I have made to date.

I have several friends though who don’t want any sugar in their breads over and above what is in the flour already for dietary and health reasons and so I thought I would work on making the dough without any added sugars.

My first attempts using my usual white stoneground flour just didn’t work well. I made a complete pig’s ear of one dough when I mixed it with all milk, thinking erroneously that this would give the preferment extra sugar. 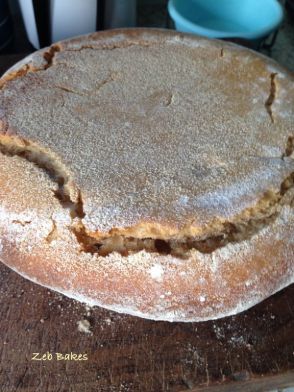 It didn’t make a nice bread, it had a dense close crumb, and the bottom crust split all round and it had that texture of cooked but spongy heaviness that I dislike in a sourdough. 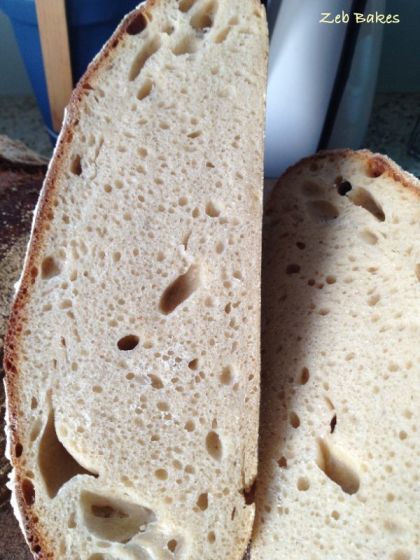 Just to show you what I mean by a poor crumb…

I have met this problem before making milk sourdough breads, so tend only to use milk as the main liquid in breads leavened with commercial yeast.  If you leave a sourdough mixed with fresh milk for long enough to develop properly you get this really unpleasant sour taste,  I have done that before and that is why I was pleased to find that the milk kefir can be used where fresh milk is not very suitable. It might be different with raw milk that hasn’t been pasteurized but I don’t have easy access to that here.

There is such a wide range of taste when it comes to bread, I am sure some of you happily make sourdough with loads of fresh milk, but I find it unpalatable.

A surprise flower in the stormy weather !

I then tried three variations of preparing a preferment and kept some basic notes as to what I saw and thought.  Each of the three was made with the same quantity of active fermented kefir, and with different flour or treatment.  I hypothesised that as hot water releases sugar in flour, maybe if I mixed some flour with very hot water first and then introduced the kefir to it it would find the sugar more easily and work faster.  I am not sure that it made a significant difference in the end. After 24 hours it did look as if it had more bubbles, but I wasn’t really convinced.

For some reason when I mix kefir with water and straight white flour the resultant preferment always ends up with that acetone/paint stripper smell that I don’t like and this proved the case this time too, so I didn’t make bread from those two as I had tried before with the acetone scented sort and didn’t like the bread it made then. This was more of a check to see if it happened again which it did.

Neat way to keep track of what is going on in what bowl and a memory jogger!

However, the kefir mixed with stoneground wholemeal and water produced a beery/fruity smell which Brian thought was acceptable so I built a test dough with it and baked it off.

It was acceptable to us, tangy but not sour, lean and clean, without any of the butter or syrup that I usually add to our soft kefir loaves. Brian claims that he couldn’t taste much difference, but I thought the crumb was slightly less sweet and the crust was definitely not as gorgeous as when made with the date syrup.

I think the kefir organisms consume most of the date syrup used in the preferment leaving very little sugar in the final dough, but one would have to have a lab to test the bread to know the truth of that, and we are all so inured to hidden sugar tastes in our food that maybe my palate just doesn’t register it as sugar.

So here is a little formula to be going on with… Misky @ The Chalk Hills Kitchen pointed me towards this shortcode for recipes that WordPress now offers. Fiddly or what? What do you reckon to my first attempt at coding? Does it make it easier to read and print? It took me ages and many edits to bodge my way through this. Practice, practice….

To make the preferment:-

Check for fermentation during this period (if the preferment is full of good bubbles then use earlier!)

Once mixed leave in a covered bowl while the dough is proving, the time this takes will vary according to temperature.

Two short folds at intervals of approx 1 hr rather than intensive kneading are adequate to give the dough shape and structure. Susan Tenney demonstrates dough folding here for anyone who doesn’t know what this means.

Shape dough and place in banetton, covered on a tray, whatever you prefer.

Leave to prove for another 3 hours. Think about preheating your oven at some point.  Do not expect the dough to puff up like a yeasted dough does when proving. Do a finger test to see if it is ready to bake. If your gentle prod leaves a dent that doesn’t come back after five/ten minutes then bake the bread in your preheated oven.

Leave to cool on a rack. Cut when the sun shines in the early morning!

For kefir grains there are sources on the internet or if you live near someone who has some just ask them nicely if they would mind sharing when they have some spare or trade something you have made or grown. It seems to be getting more popular again so they shouldn’t be that hard to source. If you have serious difficulty let me know by contacting me on Twitter, (Zeb underline Bakes) comments on posts close after a while as old posts collect spam so badly.

I read a piece about this yesterday and various points hit home and sometimes I wonder how we all survive the battleground of human communication and relationships, at times so complicated and yet I suspect it could all be much simpler if we all stopped taking our thoughts quite so seriously and just got on with the task at hand and then the next task and the next. I think it would all be easier if we focussed on being interested, compassionate, loving and trusting. Those seem to be the core healthy emotions to nurture. END_OF_DOCUMENT_TOKEN_TO_BE_REPLACED