Lately I haven’t felt much like blogging and I haven’t managed to keep up very well with you all working away and writing your lovely stories and sharing your photographs. I am feeling tired and old and quite sad a lot of the time. The drought of winter made way for the rains of April and we are quite sodden in parts of the country now. I am optimistic that May will be gorgeous though !

Mood swings, ageing, ill health are all part of the natural cycle of things for many people, well being tired and old certainly is, so I am not looking for sympathy particularly but just offer you this by way of explanation for my less frequent blogposts.

END_OF_DOCUMENT_TOKEN_TO_BE_REPLACED

Before anyone says anything, yes I know these aren’t pancakes and that pancakes are flat and cooked on both sides in a frying pan. However, these are what I was asked to make today by Brian and he doesn’t ask for specific things very often; he was made to eat salad, griddled vegetables and chicken first. (Griddled by the way for my overseas friends, means cooked on a flat cast iron pan with ridges on the stove top in my British home.)

I had never heard of these round batter balls which resemble nothing more than a slightly sweet Yorkshire Pudding masquerading as a miniature football until I saw the pan for sale in the Lakeland catalogue. Once I had the pan I set about finding out about them and the traditions associated with them. Before all the Danes tell me I’m making them at the wrong time of year and they are for eating before Christmas with glogg, yes I know that  but they are too nice to only have in December and a quick squint down the Wiki list of Aebleskiver traditions in the States shows them being eaten at all times of the year, including this very night in Urbandale, Iowa, so I had company! 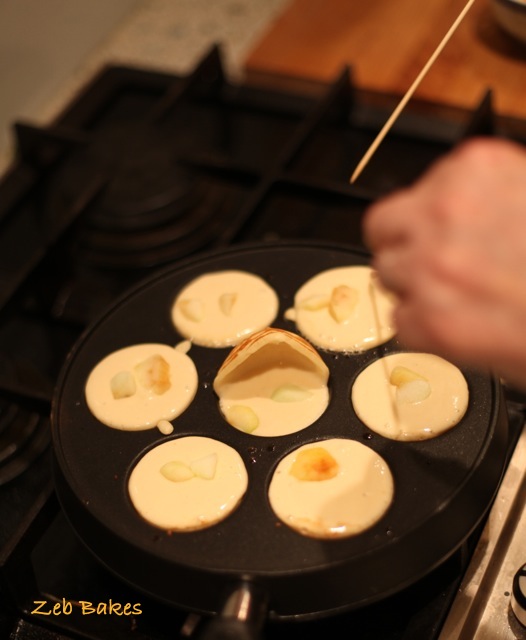 I think we didn’t have them as children because my Mother wouldn’t have liked their squidgy insides, she liked her pancakes more in the French style, thin and crispy crepes, like the ones I make usually. I don’t remember them either at any of my relatives’ homes, but maybe my sister remembers them? 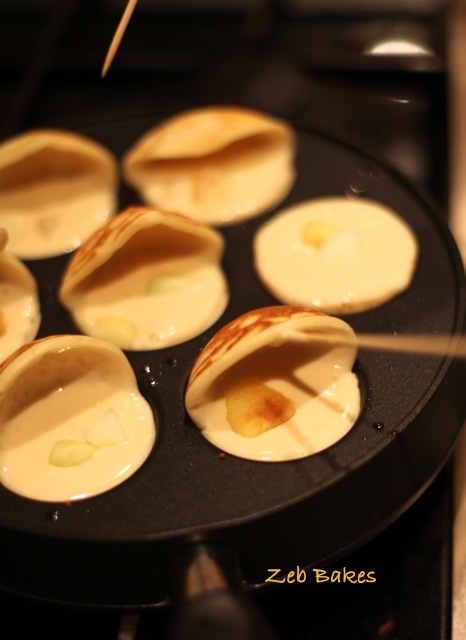 Aebleskiver (literally apple slices)  are far more common in their native country, Denmark and I suspect in the USA too, which has so many people of Danish descent living there. Certainly the internet is swamped with videos and restaurants offering these robust pancake balls and it is easy enough to work out the technique from watching a few videos.

The recipe I used for my batter is adapted from a sourdough aebleskiver formula from Teresa of NorthWest Sourdough, which you can find in her wonderful E-book and as a pdf on her site.  My version doesn’t have much sugar in and uses a lot less butter,  but it’s basically the same sort of thing. Any thick pancake or waffle type batter will do a similar job. 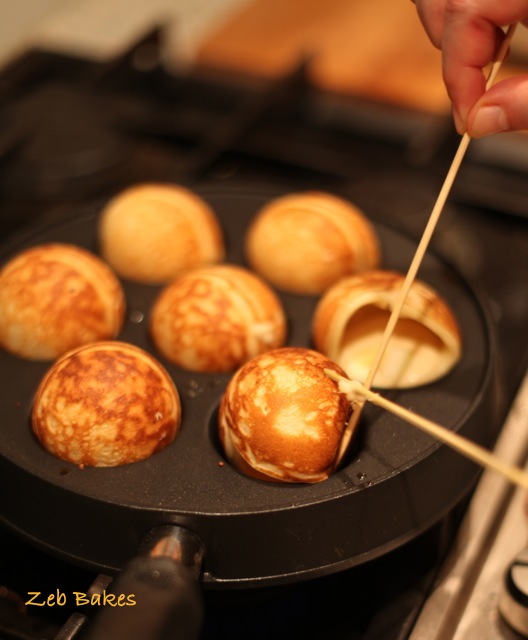 Brian and I speculated as we drizzled golden syrup over the tops of ours as to whether in fact Yorkshire puddings were a legacy of the Viking invasion and whether or not we could make Yorkshire puddings this way at Christmas, using dripping in the batter. We thought it might be rather good. Yorkshire Puddings, though now eaten with the meat and veggies all together on the plate, were I believe eaten with sugar as a ‘pudding’ originally, cooked beneath the roasting meat and basted with the fat and juices that dripped down as the meat cooked.

Anyway, these are great fun to make and if you can find a pan at a reasonable price, it is one that I have used several times and we are very fond of making them. These ones today we filled with small pieces of apple, but we have tried them with banana and eaten them with yoghurt and icing sugar on top too.

I think they could catch on here if the pans were cheaper. I know that you can currently get them from a Danish food importer based here in the UK so if you really want one have a quick google and you will find them.