A quick bialy post for Mellow Bakers, last one of the month; we’ve had French bread and a very serious rye and this is the fun one, so I saved it to now.

Some of the other Mellow Bakers who have made these so far:

I read what the Mellow Bakers who have made them already had to say about using raw onion and breadcrumbs, and the consensus seems to be that they didn’t like them,  so for these I sweated some chopped white onion in a spoon of butter for about twenty minutes till sweet and golden and then added them to some Polish breadcrumbs I found in the cupboard. Don’t ask me what they were doing there, I think I went out to get Panko and came home with these one day.

The extremes I go to….

Made dough, folded dough, proved dough, then scaled dough into 12 pieces. Shaped dough into tight rolls and left on trays. Links to recipes elsewhere on the net below if you need one. 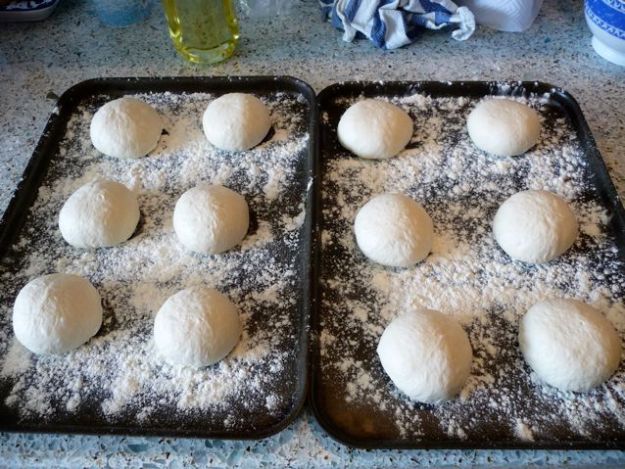 Forewarned about the tendency of these rolls to spring back to life like some mad Bouncy Castle and either ping their toppings off, or engulf them, I left the rounded doughs for a lot longer than Mr Hamelman advises (well, I like to pretend that I did this on purpose but as you who know me might realise, I forgot about them)  and the dough was well and truly proofed and starting to stick together by the time I remembered again.

The good part was that the dough was pretty tired by the time I got back to it, so it was really easy to make the flat middle bit….

And then, Dear Reader, I filled ’em and baked ’em, they don’t take long in a good hot oven, and out they came. Looking golden and smelling of hot onions….

….but they are chewy,  I think they are supposed to be. Sort of thing to keep you occupied as you wander through New York City early in the morning on your way to work, chewy because who wants crumbs down their work clothes, chewy, well just because…..they are

Recipes for bialys on line if you want to have a go….Here’s one done in cups.   If you want Mr Hamelman’s version you might have to get the book, but it is apparently a standard sort of recipe.

PS  I’ve just looked them up on Wiki which says they are named after Bialystok, a city in Poland, so my breadcrumbs are appropriate which is a bit spooky.