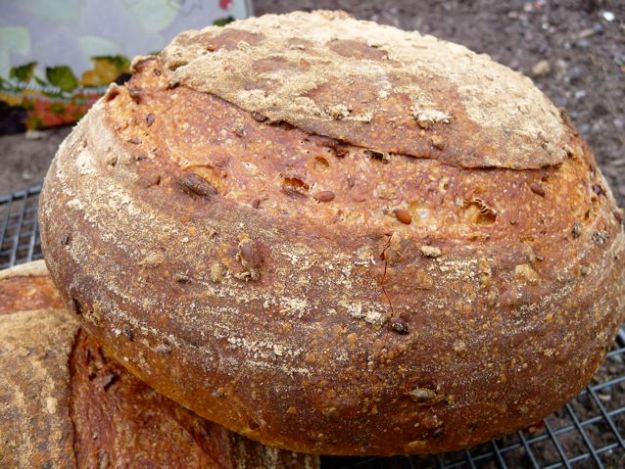 Happiness is a well risen loaf of bread!

This was meant to be a catch up post from the August breads for Mellow Bakers but is in fact a bread that’s not on the list. Whoops!

Somewhere I have got a little muddled up so I made this bread which is not the straight five grain bread (one of August’s breads)  but the five grain bread with paté fermentée on page 129 of Bread – A Bakers Book of Techniques and Recipes by Jeffrey Hamelman. Does it matter?  All I know is that this was a drop dead gorgeous loaf which made me happy and stayed fresh and moist for three days, we have half of one left and I will definitely make this one again. It’s a keeper. It reminds me of the light rye with its light crumb and full flavoured crust, just enough seedy interest and with the extra boost to the flavour from the old dough. Wonderful stuff!

The grains are exactly as written in the recipe, a mixture of golden linseed, chopped rye, oats, sunflower seeds and wheatflour – a cold soaker, nothing complicated; all mixed into the yeasted dough and then finally the paté fermentée, which is just a fancy way of saying some old dough.  At this point I confess freely that I deviated from the recipe and excavated a solo ball of Abby’s pizza dough out of the freezer, defrosted it over night and used that. Old dough is old dough and I figured the hydration would be ok, the pizza dough is about 70% (factor in evaporation, time in freezer – I’m kidding, right?) and the formula calls for a paté fermentée of 65% hydration. 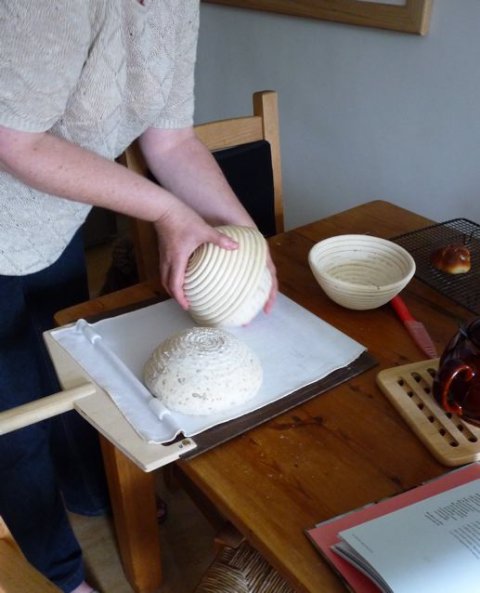 Hopefully they’ll both fit on here…

It made an easy to handle dough that shaped into neat tight boules which I popped into two bannetons. All was going well,  in fact better than well, the oven was on, the peel was dusted, I had found my lame, tipped them out onto the peel, admired the fact that they didn’t collapse, always a good sign, calmly slashed them… 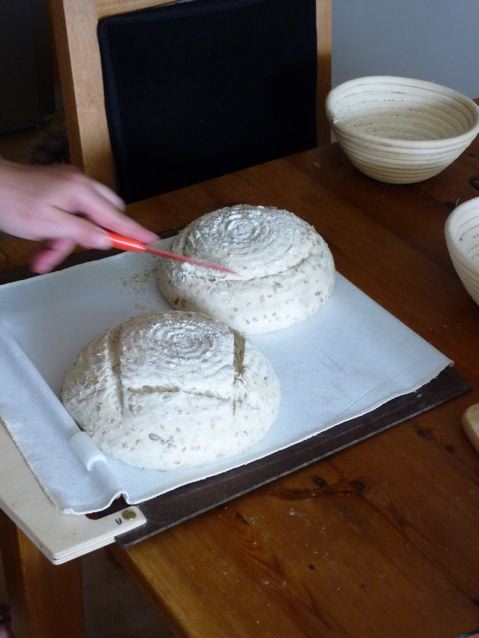 Slashing with a nice red knife

… I turned to the oven and it was only on 170 ºC.  What !!!!! It had been turned on, and the oven’s default temperature is 170ºC and I HAD FORGOTTEN to turn it up. So, in not so quiet desperation, I flipped it up to 250 ºC, cuddled the dough a little, whispered sadly and helplessly ‘Be patient, just wait, just hang on in there, please stay calm, please !!!’

I got a little water and painted it into the slashes to distract them while they waited, and the boules were very good and just sat there and didn’t move for ten minutes while the oven guiltily heated up and then in they went.

I got my reward then, I just sat there in front of the glass door and watched them spring and sighed with happiness.  Once they were done I took them outside to meet the pears which we were hastily taking off the tree in anticipation of stormy weather. It’s all go here! 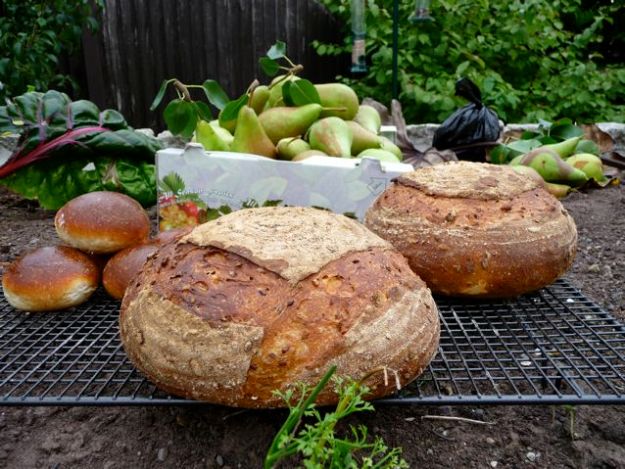 What? You want a crumb shot too? OK. 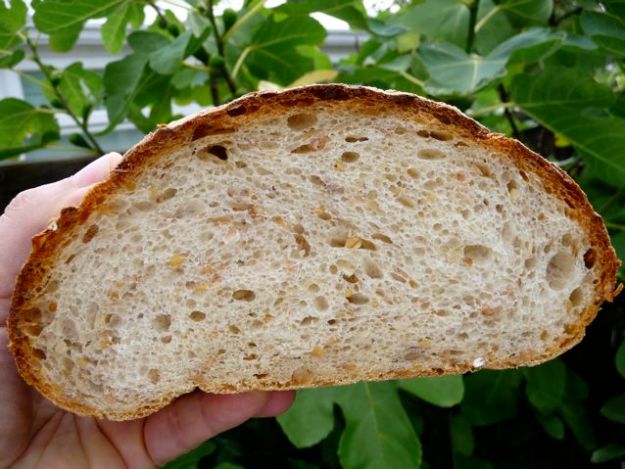