When I flung the book open to the right page I saw the evidence that I had made this one before. I have zero memory of doing it. But there are my pencilled in gram weights against the home column. When I first started baking from this book I weighed the home column out in ounces and then clicked over to the gram reading and wrote them down directly in the book. Later on I figured that one could far more easily divide the middle column by 10 and get pretty much the same numbers, so my inner Sherlock tells me that I must have made this bread before the blog.

Did I like it then? Again no notes. This is why it is good to write a blog. At least you can stare at the pictures a year or two later and try and trigger your memory.

There was nothing for it but to make it again. I mixed up the liquid levain, left it overnight. Mixed up a little bowl of crushed rye grain, (sourced at the Swedish Shop in London where it is sold under the name of Rågkross) rolled oats, golden linseed and sunflower seeds with boiling water and curiously a pinch of salt – and left that overnight to absorb the water.

In the morning I mixed up a dough with very strong (high gluten flour) and a bit of the old Swiss Dark. I held back on some of the water as it all looked very wet and indeed JH warns you that this is a water-full dough in the text and advises you to bake it well and long.

It’s all in the Timing

Various timing disasters happened along the way. The levain had risen and fallen in the night, leaving a tell tale tidemark in the bowl, but I used it anyway. Then the dough didn’t want to rise so I put it in a warm oven at about 30C (forgot to turn it down, wandered off and did something else for several hours) rescued it belatedly, it had tripled in size as you can see here… 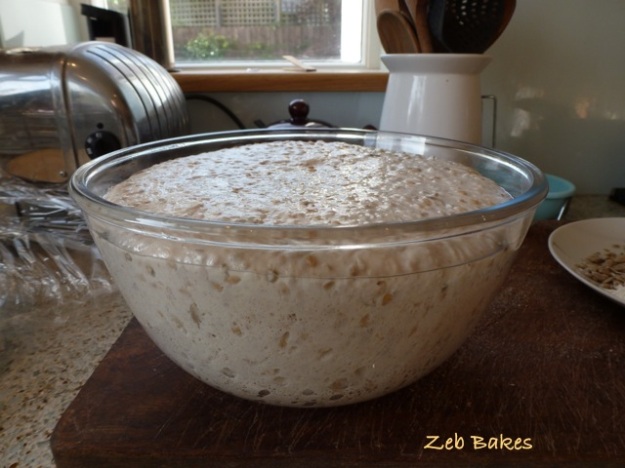 So I threw it out onto a board with a large wet splat – then the phone rang – and I chatted away, while poking it with one hand to stop it sliding onto the floor. Eventually I shaped it into a large floppy boule that wouldn’t hold its shape. Then I changed my mind and tipped it out onto the bench (more flour everywhere) and finally wrangled it into six little rolls and a loaf instead. Messing around with the dough doesn’t do it any good, I know that, but that’s what happened.

The bread has good flavour and I like the combination of grains, but it is supposed to be light and airy according to Jeffrey Hamelman and you can see that the crumb is fairly close and dense. That is down to my handling. In my defence it was a very sticky, gooey sort of dough, but again that was my mistake for letting it get too warm in the ‘proving’ oven. Cooler doughs are a lot easier to handle than warm ones. You’d think maybe I would know all this?  Well I do know it, but every so often I just ignore what I know and do something fairly senseless. It’s lucky I don’t do this for a living, that’s what I say.

The good bit was making the rolls look very perky with just a single scissor snip to the top of the roll, a trick I saw Luc Martin, the supper club maestro,  do with some very interesting rye rolls he made recently which I have copied here.  [By the way if you are a pasta maker, have a look at the fantastic filled pasta tutorials on his blog.] 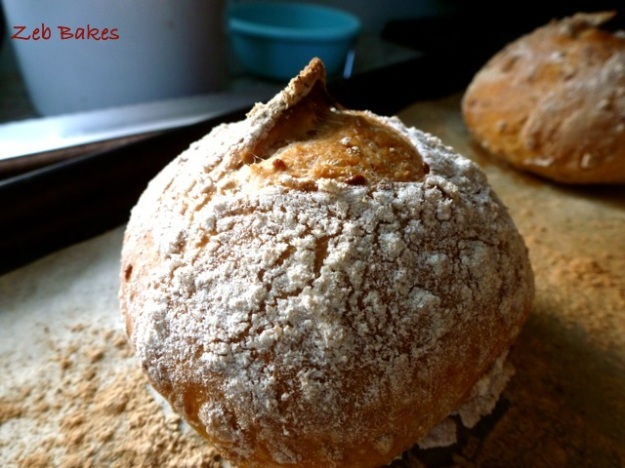 If you are despairing of your slashing, try using a pair of scissors instead, hold them at a shallow angle and cut little V’s into the dough and with any luck you will get a very nice hedgehog effect on your loaf.