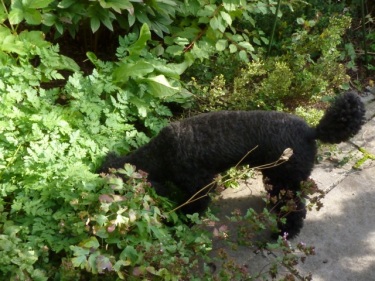 Zeb looks for something important under the sweet cicily 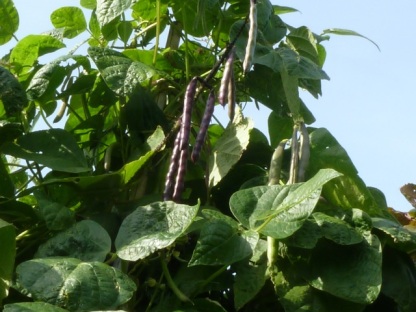 A quickie garden post for you and anyone else who is interested of course. At the moment in the garden we are still eating the fabulous Cherokee Trail of Tears beans, apart from the ones at the top of the vines, which I can’t reach even if I stand on a step ladder, so those ones will have to wait to be grabbed when we get a frost and I will use the beans themselves in a stew. We had a small crop of a nice dwarf yellow bean, but it didn’t do as well as these, which despite losing all their early leaves then took off in a big way a few weeks ago and raced for the sky.

Of the four sorts of tomatoes we tried, all grown outdoors, I think I am the only person in England who hasn’t had tomato blight, for reasons that escape me completely. The only thing I can think of is that we didn’t grow any last year and I don’t grow potatoes either. 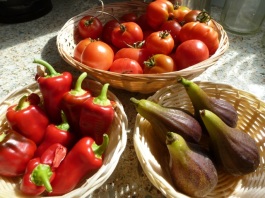 Lateh tomatoes, my entire crop of lipstick red peppers, all eight fruits, and some of the figs from my brown Turkey fig tree

I have tried Lateh, Urbikanny and a new yellow millefleur type which has been very productive and is still ripening handfuls of tiny yellow fruits each day. I am thinking that the small tomatoes are perhaps the safest bet if the summers are cool, they seem to take less time to ripen than the big ones. I have one Bulgarian one which has big fruits but they still haven’t ripened and I am not sure they will. 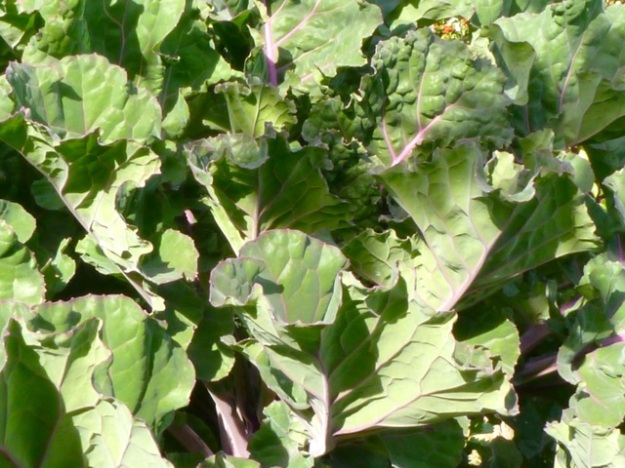 Elsewhere the flower sprouts are huge plants now and casting shadows over the rest of the raised bed. We planted a handful of celeriac plants and some root parsley which I hope will be nice, but only tiny quantities. 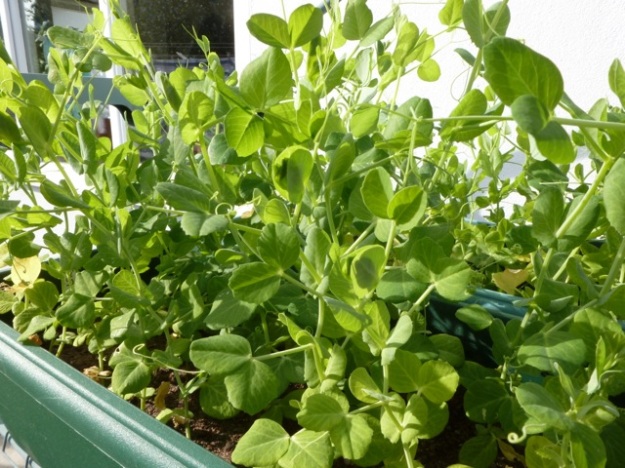 I optimistically sowed some late seed, turnip broccoli, rocket, coriander, chervil, english winter thyme, salad mustards, peas (for pea shoots) and some Asian Green seeds from Joyce my Seedy Penpal, and some little rows of radishes and everything has popped up, though what will come of it remains to be seen. I am also seeing if I can get some Italian fennel to grow to bulb. 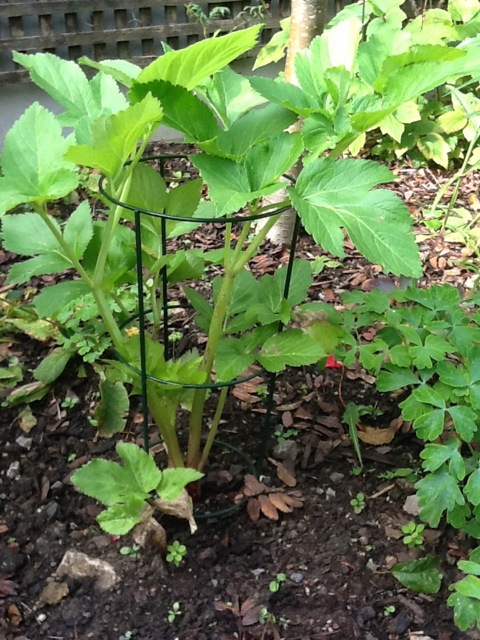 I sowed some Angelica this year and managed to get some plants to ‘go’ so maybe next year I will be able to candy their stems. 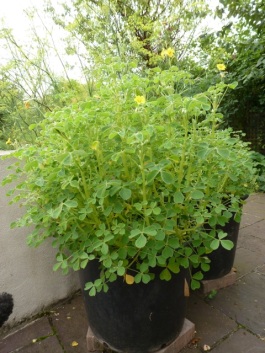 I have oca in a couple of tubs sitting on the deck too.

Elsewhere, the everlasting sweet pea is running riot in a pink sort of a way, the fig tree is wasting its time producing more babies which won’t ripen now, but I had a few weeks of fresh fig eating bliss, no one else likes them so I don’t have to share, some of the perennial herbs and plants are having a bit of a moment, making new leaves, the oregano and marjoram are busy flowering away, they self seed all over the place, along with the weeds.

My apple tree has produced a few boxes of apples and the pear tree is sporting maybe a couple of dozen pears, nothing compared to last year so I won’t be bottling this year I think, though maybe some chutney if we don’t manage the apples. 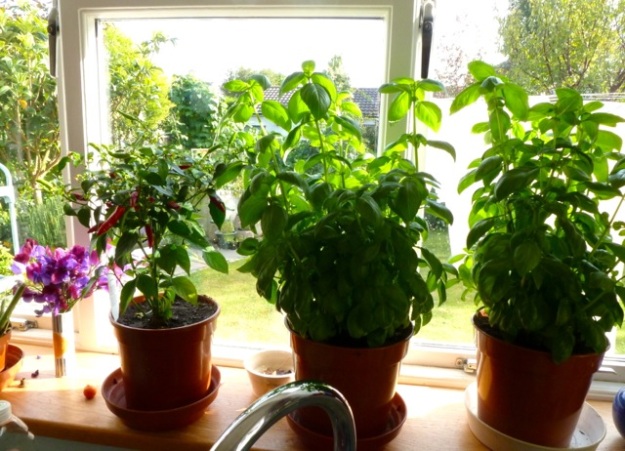 Oh yes and in the kitchen, two repotted basil plants are thriving (from the supermarket) and Brian came home with a chilli plant today so we have repotted that too.

I have bought loads of sweet pea seed which I mean to sow into modules and put in the cold frame next month and I have loads of things to try for next year, just no space. I eye up the lawn and think could we turn it into beds, but I don’t think I have the energy right now. 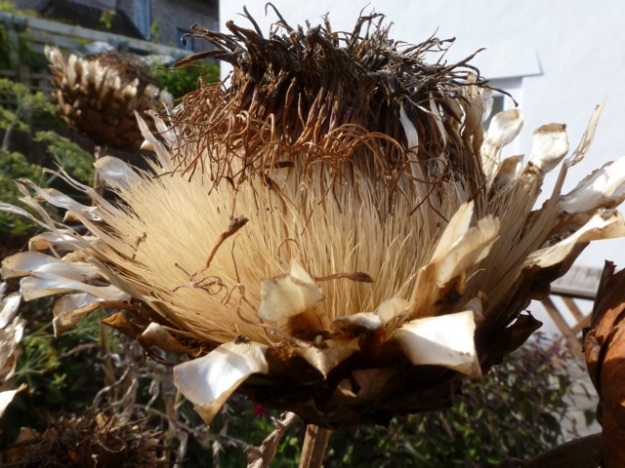 We are letting these cardoon heads go to seed as we want to see if we can start some new plants and take the old ones out. We grow them mainly for the bees who love them.

There is glorious sunshine today and heavy rain forecast for the next three, so it goes. 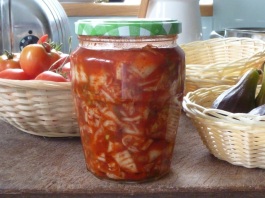 I have kefir doing its thing merrily in the kitchen, a gift from Carl Legge, and an experimental jar of kimchi too made by me, which gave me the most terrible indigestion I have ever experienced but all’s fair in love and fermentation !