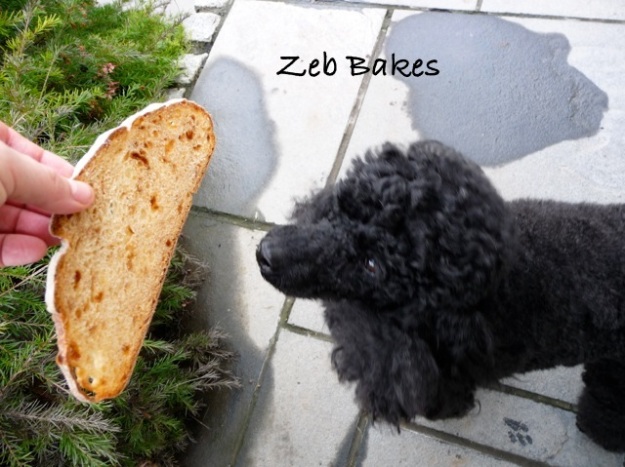 This is going to be what I now believe is called a ‘longform’ post. i.e. more than three lines and two photos.

It has been about five years now since I picked up a bag of flour and wandered dustily down the bread road.

Other people in the same time span have started their own businesses, gone to baking school, and done all sorts of wonderful things seduced and entranced as they are by the whole baking world.  I still haven’t made croissants or doughnuts, but I like to think I can make a reasonable loaf of sourdough and great pitta bread.

In this post I just wanted to have a little chat and a meander through my baking past such as it is,  because I sometimes think that people don’t quite believe that we all go down the same road more or less trying to figure out this bread thing, which is how to make bread that makes us and the people we share it with happy!

I have spent a bit of time trawling through old photos, many of which were taken by Brian, (the clue is that his have that fancy blurred background thing going on).  I will try and do a ‘with hindsight’ running commentary on what was going on, and what might have gone wrong, but it is hard to know exactly. If you knew me when I posted on Dan’s forum you will have seen these photos before as I puzzled over what to do to put things right the next time… 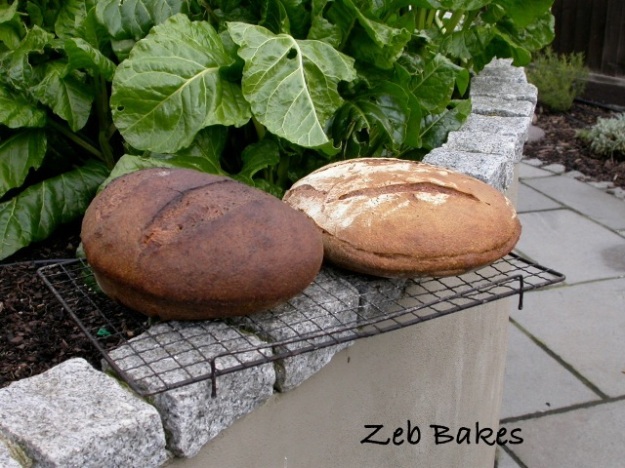 Here we have two of my very earliest loaves, I was very ashamed of them, but I also thought they were quite funny so I took their photo vowing that I would do better next time.

They were both made from the same dough, the flatter of the two on the right had stood for about an hour longer than the other one before being baked and was completely and utterly overproved. The very dark one had been in the oven for ages at a very hot temperature. All those hours of waiting and I wasn’t very impressed.

However my best loaf possibly ever and the one that makes me smile the most is this one: 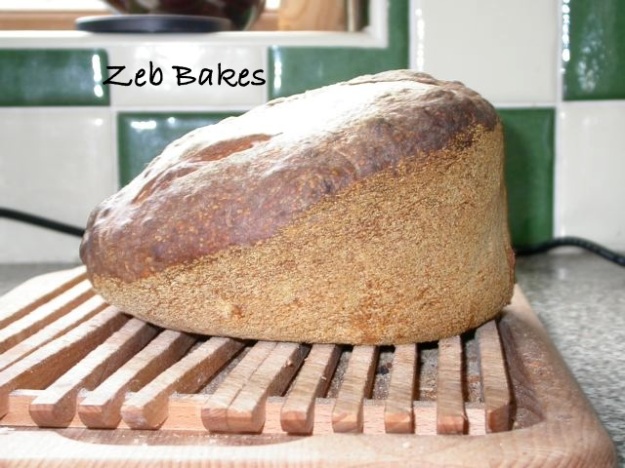 This was an experiment in not kneading and not folding and putting dough in the fridge overnight. I thought I would be even more minimal than the most minimal of bakers and very clever. I hadn’t really understood that you have to get rid of some of the bubbles in the dough, or stretch and shape it. 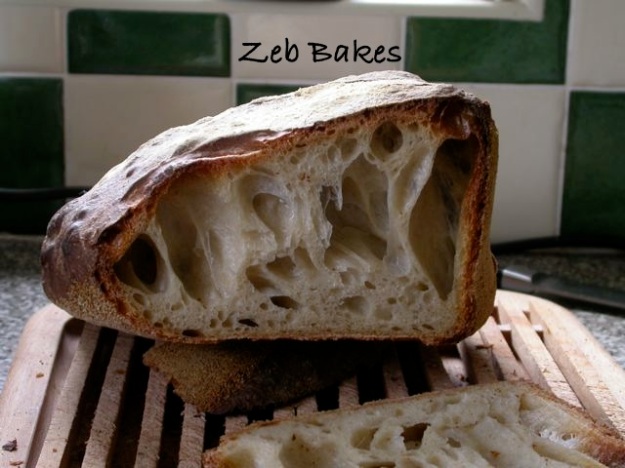 As you can see it turned into a mouse cathedral, and rose in a way I have never been able to replicate since. I think there was so much air in the dough that it just didn’t know what to do. Ah me. 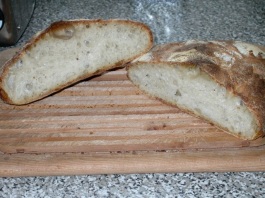 This was my first attempt at a basic white sourdough made with Dan Lepard’s recipe in the Handmade Loaf. It is a simple dough but not an easy one to handle if you are starting out. I read somewhere the other day that simple is not the same as easy, and this certainly applies to bread making. I think I had used so much oil to handle the dough that the crumb took on a shine resembling my face after a day in the kitchen. Using oil to shape dough is very useful, but too much can cause problems, particularly when it comes to sealing the seams underneath with a firm dough. Use it sparingly and save yourself this grief.

At this point I spent a lot of time reading about flour and reading bread books and decided that if only I had the ‘right’ flour I would make much better bread. In fact I hummed and hawed about this a lot, bought all sorts of different flours and experimented madly, and spread myself so thinly that I never really knew what I was doing. 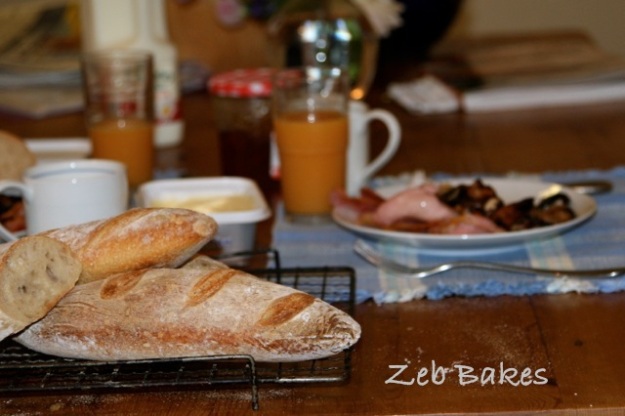 I made an attempt at  overnight sourdough baguettes and was appallingly pleased with myself. In fact it is just sourdough in baguette shape but no matter. As I have said before I am not a perfectionist and am easily pleased! Look at their funny little shapes and their slashes! 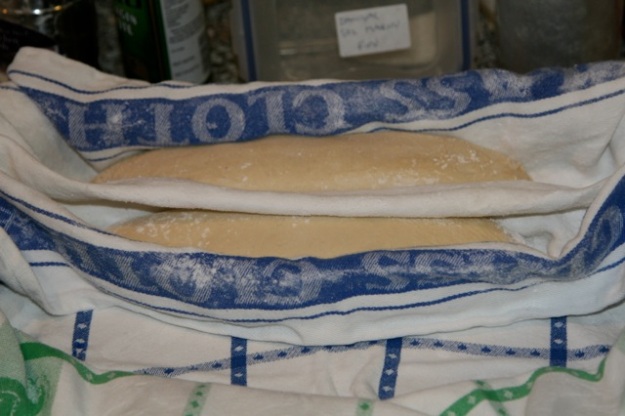 I proved these in my old cotton teatowels, no fancy couche cloth here, not a clue really what I was doing, but I do remember eating these, baked from cold from the fridge and being extremely happy and greedy. 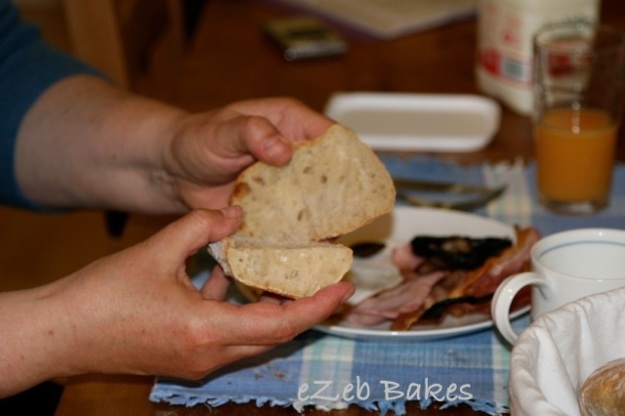 I carried on making breads and posting about them on Dan Lepard’s forum, I shyly chatted away to people who also posted. I made friends, I asked questions, I began to think I knew some of the answers and tried to help people who also turned up, the curse of being an ex teacher and wanting to share knowledge, partial though it was and still is.

It was a lovely forum, with a great mix of people from experts to beginners and was very gentle and friendly. I admit I bought brotforms, in those days not as easy to find as they are now,  so I ordered some from Germany. I found two french banettons with linen liners in a catering suppliers in the UK too.  My early banetton loaves had a ghostly white pallor as I had read somewhere to dust them with potato flour to stop the dough sticking. It works fine but doesn’t change colour in the oven at all. The loaves were beginning to look like loaves that made sense to me at last. 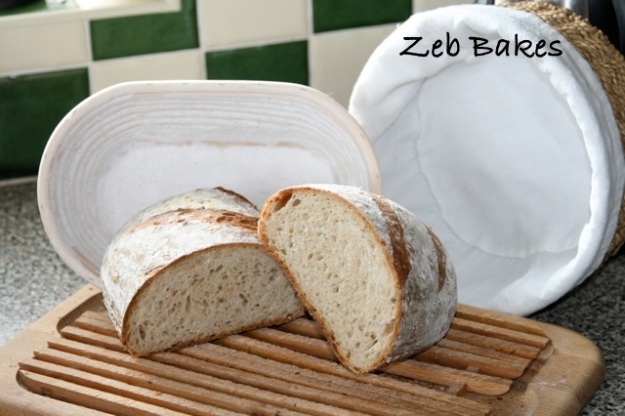 I am not the most consistent of people and I maybe never took the baking or the blogging quite seriously enough to be a bona fide food blogger nor a baker but every so often I get a nice comment or an email from someone who has been brave enough to make something based on what I have written here and then I feel very pleased that I have helped which brings me to the highlight of my blogging week:-

Highlight of the week 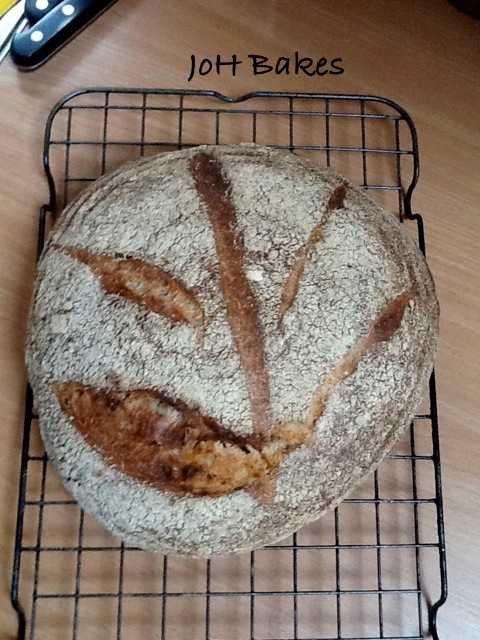 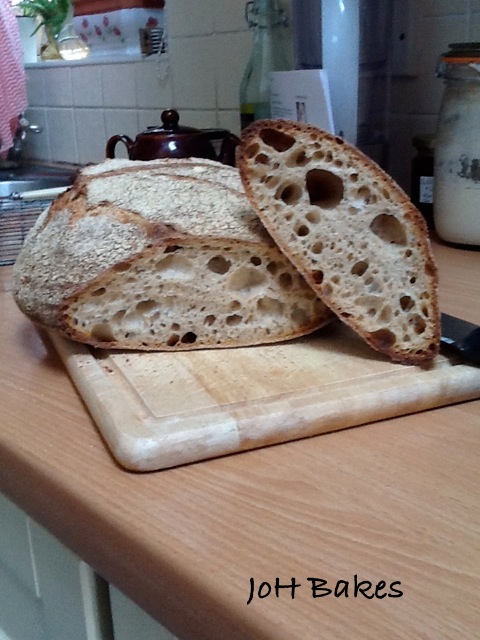 Look at that crumb! 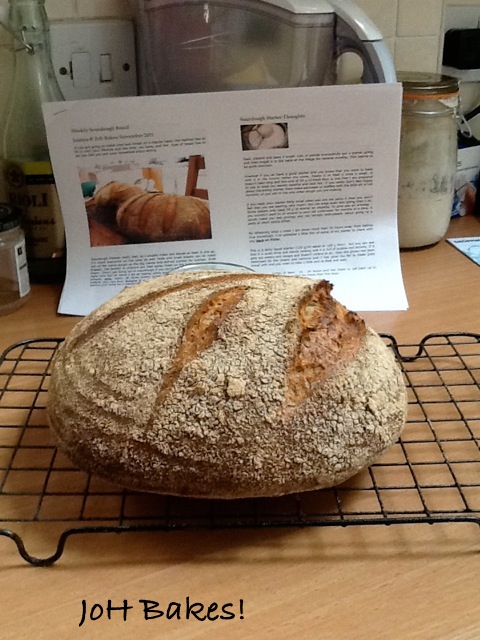 These are photos of JoH’s sourdough that she sent me this week which I am allowed to show you.  I think her bread looks just great and I am delighted that she too is jumping up and down with happiness at making a loaf that pleases her. She was working from my weekly sourdough sheets which you can find here → Weekly sourdough pdf

So here’s to all of you brave and foolhardy people who drag a bag of dry flour into the kitchen, squint at a recipe, wonder over instructions like ‘give the dough a turn’ or ‘ form a boule’, who convert cups to grams and ounces to handfuls,  burn your arms and skid on semolina, to those of you who sit by your ovens and smile as the bread rises,  feed your friends and family, share pictures and stories, advice and lore on the internet, with your salt and your leaven, your ferments and baskets, I salute you, may your bread rise and your crusts sing and crackle!

Oh and a last word of my best well-meaning advice – don’t worry about what they do on TV, follow your instincts, take it all with a pinch of salt, they don’t know it all, no one does – question everything, practise lots, study your failures, as they will tell you more than you think, and have a good time!