As Celia has referenced this post which I had long forgotten, I just wanted to add a pair of links. Firstly to Michael Wilson’s Italian Baking Blog Staff of Life and secondly to The Fresh Loaf where Michael Wilson also posts and discusses panettone and pandoro formulae he has worked on. Michael Wilson’s work is some of the best I have found on the internet for people wanting to know more about using natural yeast/sourdough/madre/lieveto naturo for making these fantastic and special breads.

As I recall the most important thing is to supercharge the starter so it reproduces and builds very quickly, stays mild and ‘yeasty’ as opposed to slow and ‘bacterial’. If you can get hold of SAF Gold dried yeast if you are doing a yeasted version, this yeast copes better with the load of sugar, eggs, butter etc than ordinary dried yeast. It is called ‘osmo-tolerant’. Anyway good luck all ye home bakers of panettone, May the rise be with you! 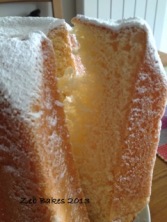 And just to show you that I do still occasionally bake these enriched breads – above is a crumb shot of a pandoro I made back in 2013 using the recipe and method from Artisan Baking Across America by Maggie Glezer which she calls Bruno’s Pandoro. It is very similar to panettone and in some ways easier to make as it has no fruit in it.

November 2011: I thought I’d just update this quickly as people keep asking me about panettone and I haven’t made one of the all bells and whistles ones yet this year,

I have made this one that looks like panettone and has the flavours and fruits and if you have run out of time or eggs you could give this one a try like I did.  It is not as tender and melt in the mouth as one of the ones made from the recipes below but it’s a nice cake and I see similar ones on lots of blogs here and there. There are no short cuts to the best panettone.

For those people who pitch up here on a serious modern style panettone hunt here are some suggestions:-

Floyd who runs the Fresh Loaf, that wonderful international forum for bread bakers wrote this post about making panettone without all the fancy bits. I am sure that if you visit over there and have a little search you will find many fine bakers making panettone to inspire you too. Edit : Here is a recent post by txfarmer with pictures to drool over! The recipe he used is here on itchefs – I am going to read it later but just adding it in quickly now. Lots and lots of egg yolks!

The one I made in 2009, all by hand was so good I made them several times in various shapes and sizes,  followed the method and recipe from Susan at Wild Yeast’s recipe and method here – it worked for me and I really like the topping!

Edit December 2012. Susan at Wild Yeast has written an updated post with even more detail and tips and I am having another go this holiday.

She has other panettone posts on her site too, so spend some time there as she is a master baker.

Dan Lepard has a recipe here that I would love to make if I have the time. He has also written a new ‘easy panettone’ recipe which you can find on the Guardian’s site in the How to Bake column that he does each week there. The old forum where so many of us contributed has been put to bed so I have taken out the links to the big panettone post there as it is no longer available to view.

For those of you who hanker after the pearl sugar to sprinkle on the top; one UK source is Totally Swedish who have a webshop and a retail shop in London, they also have packets of a yeast type designed for sweet breads, which I think is the same thing as osmo-tolerant yeast. If anyone knows of other sources, I’d be happy to list them here. Bakery Bits has the cases in all sizes, pearl sugar as of this year (2011)  and the fabled Fiori di Sicilia and Panettone essences in stock as well.

PS Here is a pic of my sourdough at the ‘1st dough’ stage of Susan’s instructions one Christmas, nestled under the stairs on top of the water heater… I thought it might explode… 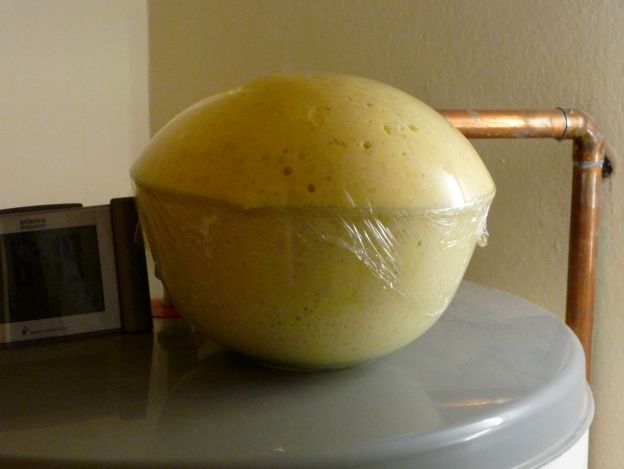 Other suggestions for panettone recipes : Lynn has found this one in Delicious magazine

Do have a look at Ulrike’s classic Milanese panettone. (see her comment below)  She’s a very fine baker indeed!

This is for anyone who wants to read more about the French Bread from yesterday’s post. 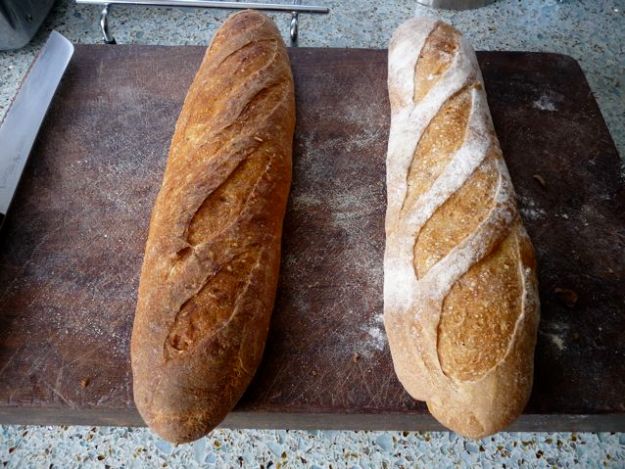 An experiment with flours