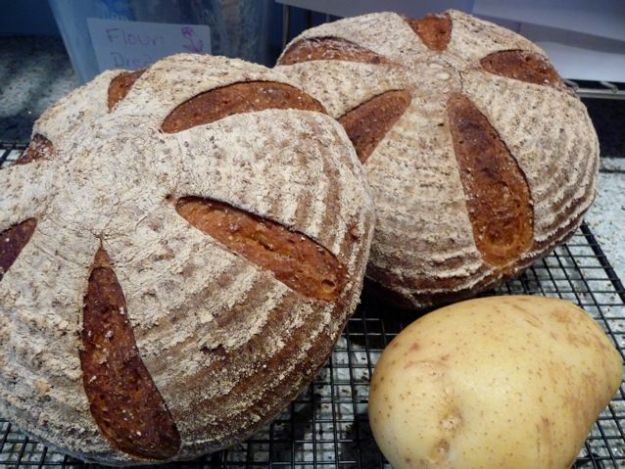 Potato, almond meal, rice, tree-bark, many other foodstuffs besides grains, get added into bread. This has a historical precedent; when times are hard and wheat expensive, it is common practice to bulk out the dough with a locally available and probably cheaper ingredient.

This bread is a reminder of those times according to Jeffrey Hamelman. It’s a good idea to keep these thoughts in mind;  climate change will bring many changes to the grains we have available to bake with and the way the world thinks about food.

Some quick notes on this bread:

I chopped the potato up, skin and all into 1 cm cubes, and roasted them in a shallow dish in the minimum of olive oil for about 25 minutes while I was cooking something else in the oven.

I added at least another 50  grams of water as my flour was very thirsty and the dough was very tight when I first mixed it.

All was going well and then I had to go out, so I put the dough in the fridge after the first hour at room temperature.  Three hours later I returned, and rescued the dough. I  flattened it out gently and folded it. After half an hour I divided it into two portions, rounded them up and popped the dough into bannetons which I left in a warm spot in the kitchen.

Life intervened again and when I finally came back to the kitchen two hours later they were well and truly risen, so I baked them as soon as the oven was up to temperature. They didn’t appear to be overproved, the slashes opened and they rose nicely in the oven. I loved Abby’s pattern on her loaves so I thought I’d try and do that.

These loaves had very thick crusts, which surprised me a little, given all the steam and were quite difficult to cut the first day. By the following day, the crusts had softened and the bread had developed more flavour and we are still eating our way through them happily this weekend. 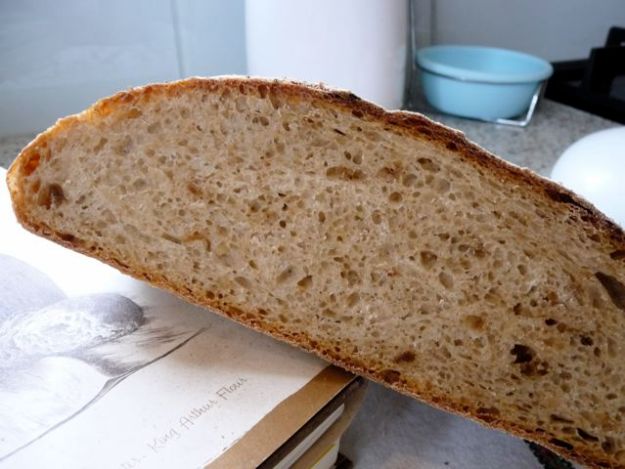 Strangely I can’t really taste the potato as a separate taste, it adds something but I can’t describe it. One can see the great colour the roast potato lends to the loaf , plus it adds a sort of unctuous chewy mouthfeel as well, something like crumpets but not as sticky.

And today, Sunday, three days after I baked it, the sun has come out and look how lovely it looks still: 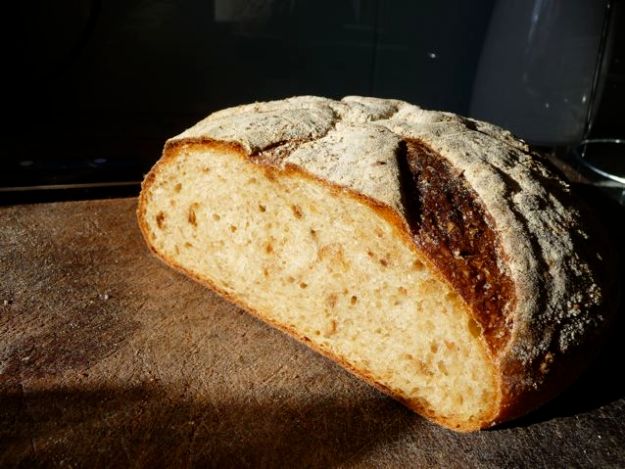 The sun has got his hat on!

Other Mellow Bakers who have tried this bread so far this month – and they all seem to really like it too – are :

If you would like to have a go, the other bakers have written out the formula on their blogs so no need for me to do that here, as I didn’t do anything different!

And after this I really have to face the braiding of the challah – watch this space.