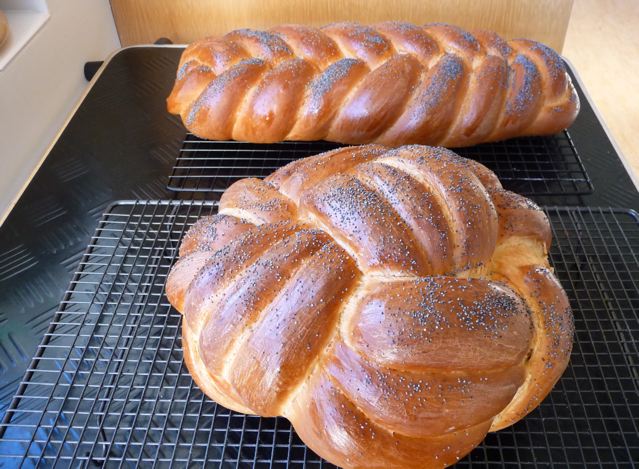 Journeying through the wonderful collections of breads in Bread by Jeffrey Hamelman, from time to time I come across a bread that simply doesn’t resemble the bread I associate the name with. This challah is a prime example of this. Challah in my childhood was a soft, dense white bread, plaited tightly and tasting of poppy seeds. Whether England was still in the post-war egg rationed mode in the early 1960s, I don’t know. Today’s American challah bread I can only describe as a butterless brioche, light as an angel’s feathers and almost ethereal. I doubt my grandparents would recognise it.

I have put off making this bread. Everytime I looked at the recipe, I thought, hmm, I don’t have enough eggs, or I’m going to have to think very hard about braiding and so it has gone on till this morning, when there were indeed enough eggs and I had thought long enough about braiding.  It’s a bit like when you are learning to drive and it just seems impossible that anyone will ever give you a licence. You just have to look around you and say, “Hey, all those people can do it, it might be difficult, but it can’t be impossible.”

Celia has created a beautiful tutorial showing how to braid a Winston Knot. How could I fail with that guide?   I printed it off and kept it close by while I made the first braid. I almost panicked when at the bottom of page 1, I could only find page 3 –  I squawked and then found page 2 which had got stuck to the back of page 1. Disaster averted but it was close.

So here are the pictures of my challah adventures for Mellow Bakers this morning, not quite as hard as it looks but still required some serious concentration.

I mixed the dough in a Kenwood mixer. I put the eggs, water and oil in first, added the salt and sugar to that. I added the yeast to the two flours separately and then added the dry to the wet, that’s the way the Kenwood likes it.  I also hand kneaded the dough for about 3 minutes once the Kenwood started rocking about. The dough was left in the fridge for a couple of hours, but there is so much yeast in it that it still had to be knocked down every 40 minutes or so. I am sure one could make this with less yeast!

I made the braids for the Knot 150 grams each and rolled them out to 60 cms long having been forewarned.  This left me with 800 grams of dough for the 6 strand plait so they were smaller at  133 grams each.  Even so both loaves were huge by the time they had proved and baked. I showed them off to my neighbour and then gave her the Winston Knot to take home. Too much bread for us and no room in the freezer for such a monster.

The other bread which was a 6 braided loaf was easy by comparison.

So don’t be afraid, well don’t be too afraid, if a braid-phobic like me can do this, you can too !  This was one of the October breads for Mellow Bakers. Thank you to all those of you who have already baked this, by watching and learning from you all I have gained so much.

25 thoughts on “Challah for Mellow Bakers”