In the woods the wild garlic is growing once again and we picked some the other day making delicious pesto with it. We had pasta with mushrooms and garlic pesto, and then used up the leftovers in a yellow pea soup  one lunchtime.

Today I collected another handful and added it to the mix for the spicy potato masala for my second attempt at scratch making dosas. I spent a wonderful day recently with Gill the Painter in her kitchen and we made dosa together as it was pancake day. Gill is an expert cook as some of you probably know!

I came home full of enthusiasm and motivation and rooted around in my garage and found much to my surprise that I had most of the ingredients sitting in a box.  Last year I had a conversation with Max Artist, (who has an alter ego called Max Cake Baker and Caterer)  about dosa making and he had recommended Vahchef’s YouTube videos. I remember watching them and I must have gone out and bought the dals, and then…ahem… not done it. Maybe I got distracted, who knows? 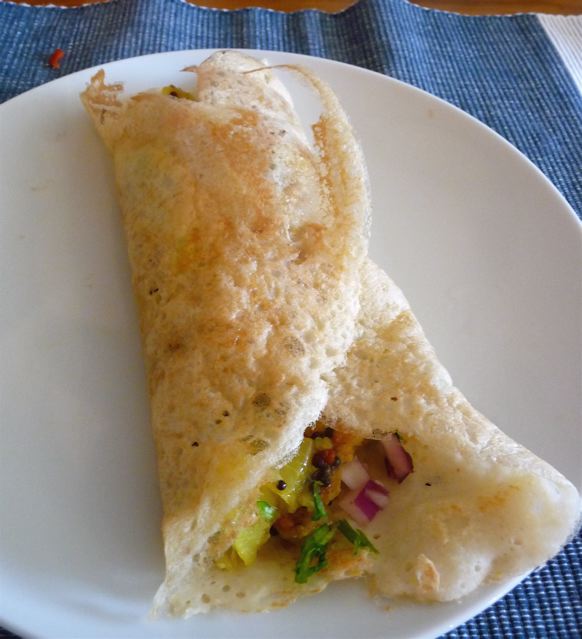 Dosa is a name that covers a whole range of pan cooked goodies made from a fermented batter.  There are thin crispy ones  – some completely enormous and shaped like cones or fans called paper dosa – then there are lacy ones with chunks of onions – rava dosa – thick soft ones – kerala dosa,  dosa made with rice, with lentils or dal, and ones made with wheat. There are green dosa, there are dosa eaten with fresh coconut chutney, with sambal, with mutton curry. Getting hungry yet?

They are a staple in southern India, eaten at home for breakfast and for supper,  and they are just great! For the recipes and instructions read on…

One of the mysteries of eating out in England is that even though every town or village has an Indian restaurant or two, it is rare to find the mainly vegetarian cuisine of South India, the wonderful bel poori starters, the chats, idlis, thalis and dosas.* One suburban restaurant after another serves up the same menu of dishes. Like supermarket bread, the Indian restaurant trade thinks that this is what the population wants. I wish everyone would go and ask for dosa and idli and bel poori and thali; they tick many boxes from a health point of view, being lower in fat, usually vegetarian, often vegan, dairy free, gluten free etc, high in protein and carbohydrates.  They are economic to make, the ingredients are inexpensive and they cook quickly and you can customize them to suit your family’s palate with no difficulty at all.  Perfect food !

In a radical departure I used cups to measure the ingredients for this. (I’m a metric person usually.)

I reckon these quantities would make enough dosas for three/four people, if you are very hungry or feeding big people then double up the quantities.

Wash the rice and two sorts of dal in a couple of changes of water. Add the fenugreek seeds and then leave to soak over night in enough water to cover. I poured boiling water over the rice and let it sit for about five minutes before making up the final overnight mixture. You can use parboiled/easycook/converted rice too. Don’t add any salt at this stage.

The following day, blend the soaked and lightly fermented mix in a blender with water. We ended up thinning the mixture several times while we experimented with what sort of texture we needed for the dosas. It can be really quite watery,  but should coat the back of a spoon. The mixture shouldn’t be smooth; a grainy or gritty texture is what you want.

Add salt to taste, I think for the amount above I used about a heaped teaspoon but err on the side of less rather than more as the filling is spicy and rich and you can add the salt there.

The crucial differences between cooking dosa and wheat based pancakes as far as I can tell from my few attempts are as follows:

Crêpe batter is made with wheat flour, egg, milk and sometimes with sugar and butter. The gluten means that you can swirl the batter round the pan and it will hold together; the sugars and fats mean that the crêpe or pancake will brown very quickly and burn quite easily too; making the dosa was very unsmoky, unlike making crêpes!

Dosas on the other hand are made with water and the mixture has no gluten. So you use a drop and spread technique to shape the dosa. The best way to understand this is to watch Vahchef’s video below. He makes it look effortless. Also you need ideally to use a non stick pan. I used a square griddle pan to make mine today.

We found that the batter at first was a bit thick for what we wanted so we thinned it down. We experimented with various tools for spreading out the batter. I stuck to the back of a metal spoon, Brian preferred to use the dough scraper. I fantasize, that, if only I had Vahchef’s little bowl I would be able to do it perfectly like him but I know in my heart of hearts that is just a fantasy.

What else have I learnt so far? Cook the dosas on a medium heat, don’t cook them too low, the lentils won’t cook properly if you do. Once you have spread out your mix into a circle, remember to sprinkle it with oil. Don’t put oil on the non stick pan itself, it’s not necessary. Wait and watch, look for the little holes appearing in the surface of the dosa, the surface changes and appears to sweat as it sets. Loosen the edges with a spatula if you are worried it might stick. Don’t worry about small holes or gaps in the dosa, they don’t matter at all.

For the potato masala that I made today I watched Vahchef at work. I will put the two YouTube videos at the end of the post so if you have time you can watch him in action.

I didn’t have hing (asafoetida), or cashew nuts and I didn’t have curry leaves but I thought I would give it a go anyway.

Heat oil in a frying pan and add the dried whole chillis, then, one by one, add the ginger, the cumin seeds, black mustard seed, fry for a little.

Then add red and green chillis to taste, sliced onion, turmeric and chana masala mix. Stir some more. Add the wild garlic leaves towards the end as they wilt quickly.

While you are doing this, boil the chunks of potatoes in enough water to cover but not swamp them. Once they are tender, drain but leaving about a third of the cooking water in the pot. Stir the spice/onion/chili mix in to the potatoes and adjust the seasoning, adding salt and so on to suit your taste.  I added some fried dals as well for extra crunch!

To serve put some of the potato masala on top of the dosa and wrap it up. I really wanted to make fresh coconut chutney to go with it, but it will have to wait till next time.

We devoured ours with some chopped fresh coriander, chopped onion and red pepper and yoghurt raita, fresh limes and shop bought lime chutney. 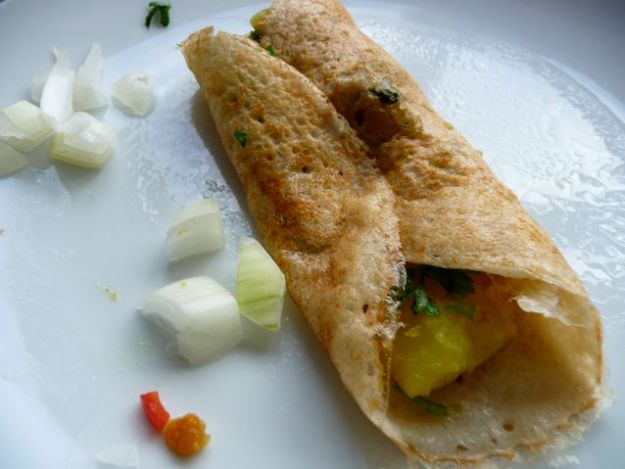 The thinner you can get the dosa the crispier it will be, but soft dosas are really good too. Make sure you cook them properly, undercooked dal is not very nice. 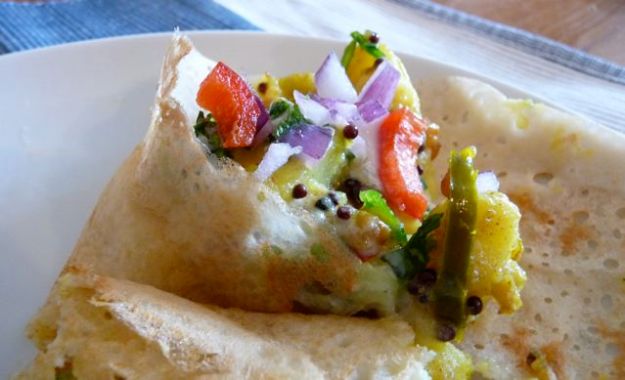 We went overboard for these slightly sour dosas, we ate so many that it was embarassing, and they are going on the menu regularly from now on. I hope we get better at making them, but I’m happy to have lots of practice. Thank you Gill for showing me how to do it, what shall we make next?

If you can’t get these particular sorts of dal, then there are many variations out there. I suspect you could probably do it with any sort of dried pea, though you might have to soak and cook very large ones before making them into batter.

And cost wise? This is such a cheap meal to make and so tasty. I just love it!

* In Bristol there is the Thali Cafe, which I have never managed to get a table in, which has won awards for its vegetarian food and there are one or two other places I have tried but none of them are like the restaurants in Drummond Street, behind Euston Station in central London.  These may have changed too since I was last there. I am a bit wary of doing restaurant reviews but this is a good place to start  if you want to eat dosas. If anyone wants to recommend somewhere that they know,  I am all ears!