Nettles – growing somewhere near you!

Inspired by the amazingly enthusiastic Carl Legge and with the memory of the Stroud Forager fresh in my mind, I decided last week to make nettle and potato gnocchi.

I don’t have a good track record with gnocchi; a memory of trying to make them over twenty years ago and producing something so inedible, even my inebriated housemates wouldn’t touch them is still vivid in my mind.  I’ve bought the odd packet in the supermarket since and found them fairly gruesome too.

There are masses of tender young nettles in the woods in April and the dogs are always keen to go for a foraging walk.

Apparently, nettles are incredibly good for you, full of  ‘calcium, magnesium, iron and numerous trace elements as well as a range of vitamins‘ and are supposed to be good for all manner of ailments as well.  Just now I came across the Be Nice to Nettles Week  which is happening next month; lots of information on that site.

Picking nettles, you either need to wear your washing up gloves, which might look a little strange in a public woodland, or as Carl suggested on Twitter, a stout pair of walking gloves.

Real Cooks do it in Gloves!

Brian being brave, picked netttles with his bare hands. He always tries to convince me that I can do it too.

I decline to experiment.

We picked only the top four leaves on any plant and it takes time to select the nicest looking nettles away from areas where they might have been peed on, though they were of course well washed and thoroughly cooked before being used.

I put them in a zip-loc bag in the fridge with a sprinkle of water and they kept fresh and sparkly till tonight.

There are a few recipes around. Ray has made a wild garlic version which sounds very tempting too.  Carl has described the process beautifully in his blog post,  but I didn’t have enough nettles to make them exactly the way he did so I adapted his principles and used:

Prepare the potatoes see notes above.

I have read that the secret, if secret there is, is to try and keep the mixture light and airy and not let the potatoes do that gluey thing they do.

Mix the nettles and dry mashed or riced potatoes together lightly into a crumbly mass ; do not beat them, add the egg, salt, pepper and flour and give it all a gentle stir.

Let it sit for about five minutes and then take a large handful of the mixture and pat it out gently with floured hands.  Then roll it out into a rope about 2 cm in diameter on a floured board, using the minimum of pressure, try using your finger tips, if you are inclined to be heavy handed. 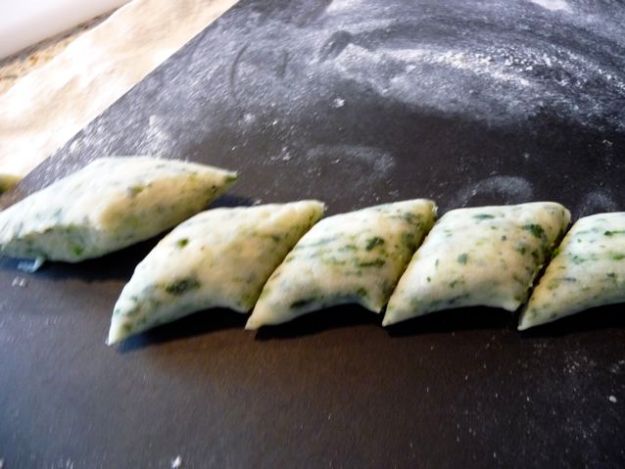 Use a sharp knife or  dough cutter, cut the rope into lozenge shapes approx 4 cms long and stack them on a flour dusted board.

Finally following Carl – indent the tops of the gnoccchi with the tines of a fork, apparently it holds the sauce better! And it looks pretty too.

Bring a large wide pan of water to the boil and heat up a jar of Brian’s home made roast tomato and tarragon tomato sauce, or whatever topping you desire, grate some parmesan and English goat cheese.

I must confess that all the time I was thinking, these aren’t going to work, they’re going to be horrible and I had Plan B in mind; a straight packet of pasta was waiting impatiently to be pressed into duty.

Three minutes in the boiling water and up bobbed the gnocchi, visibly increasing in volume and looking very perky.

We fished them out, sauced and cheesed them, cracked open a bottle of St Peter’s best organic ale…..

….and they were delicious! Light, fresh, homemade gnocchi. I’m a convert to the cause. One big thank you to Carl! 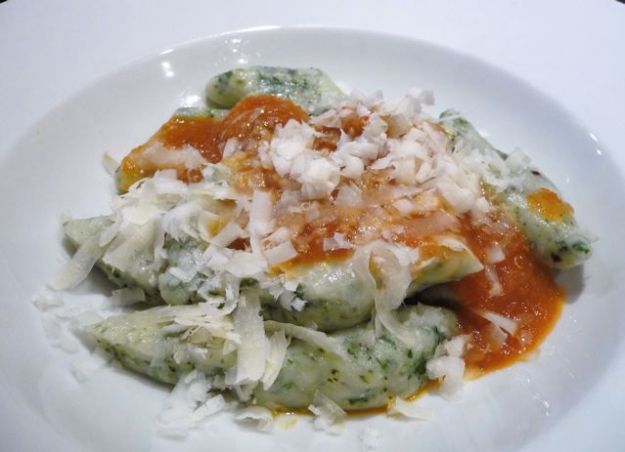 52 thoughts on “Nettle and Potato Gnocchi”