It was all a dream, I didn’t really write that poem. Today is the day after…

So lets blog. OK what shall it be, how about three trees from the garden?

First up the Judas tree (Cercis siliquastrum) the one that has ridiculous purple-pink flowers on bare twigs and heart-shaped leaves on the ends? Such a strange tree.

Why is this innocent tree called a Judas tree? My friend Mercedes tells me in Spanish it’s called a Love tree on account of the leaf shape.

This is the tree we bought when it was less than twelve inches tall and then someone sat on it and broke it. It’s done pretty well in the last five years, though it does have a tendency to cling to its seed pods and rattle them loudly in the Spring in a slightly creepy way. We had intended to buy another cercis tree, the Forest Pansy or Eastern Redbud but they didn’t have any that day so we came home with this one.

I did see one of these at Southmead Hospital which is enormous, so just remember tree, I’m watching you… 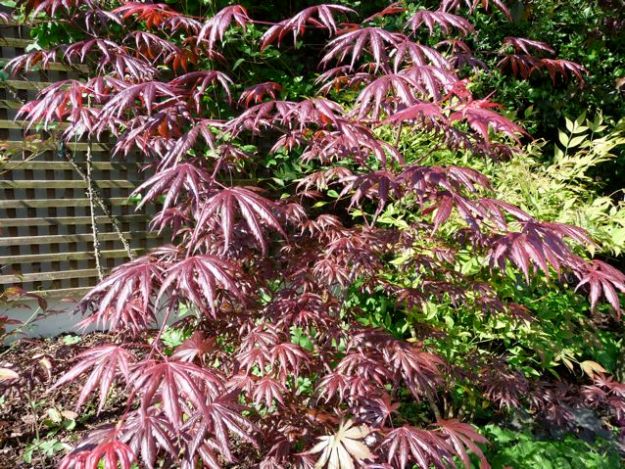 Next up, another relative newcomer to the garden. This acer came from Westonbirt Arboretum, which has a wonderful collection of acers in the Silk Wood, which is the part that they let you walk your dogs in. We like the Silk Wood for its cool calm and long avenues, its boggy potholes (Zeb likes these particularly) , woodland spring flowers, blossom and autumn leaves.

The Silk Wood Spring Fair is on this weekend, might go tomorrow…

And the third and  youngest of the three, a rowan. One of the upright ones that doesn’t spread too much. We took its support down two months ago and this is how it looked last week, covered in fresh white flowers, to be followed by red berries later on.  A good tree to have in the garden.

Today, while we were weeding and hacking back a space-greedy clematis cirrhosa, we found five hazel nut seedlings which the local grey squirrel had carefully planted last year.

We are creating our own tree nursery – I have no idea where all these baby trees are going to go, but we are looking after them till they grow up and can find new homes of their own.