It is the time of year when many beautiful and naughty insects fly into the garden. This one is a particularly glamorous yet evil little beastie. The red lily beetle, flies around like a ladybird, but has a very good playing dead pose balanced on its back with its feet and antennae tucked in. 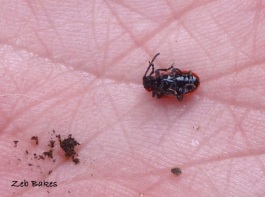 If you disturb the lily beetle at work; munching foliage, mating, or laying eggs , which are its main pastimes,  it drops to the soil and is surprisingly hard to spot as it lies on its back.

The worst damage is done by the larvae which hide on the undersides of the leaves in their own black excrement (!) and eat all the green parts of the lilies leaving a trail of deliquescing slime in their wake. By the time you notice the damage it is usually too late. The lily beetle prefers lilies and fritillaries but it will also happily destroy the leaves of other plants as well.

I love lilies but have more or less given up trying to grow them as these guys just fly in over the fence and there is not much I can do about them.

Brian has been known to squash them but they have very hard shells.

The simplest answer is not to grow lilies and I get increasingly fond of plants that insects don’t destroy and choose my shrubs and plants accordingly. We have found that nematodes watered into the soil do help to keep slug numbers down, though snails of course are a different story…

The last few days we have been seeing a brand new insect to us. It’s a bee fly or Bombylius major.

It has a brown soft body and a long proboscis and looks like a bee and hovers and is generally very busy and almost impossible to photograph. Here is a lovely picture of one uploaded to Wikipedia

taken by Richard Bartz with a Creative Commons licence.

This isn’t a bee though, but a parasitic fly which lays eggs in the nests of ground dwelling bees and wasps. I don’t know if I’ve never noticed one before or if they are new to my area.

What’s flying around in your garden at the moment?

39 thoughts on “The Red Lily Beetle is back…”