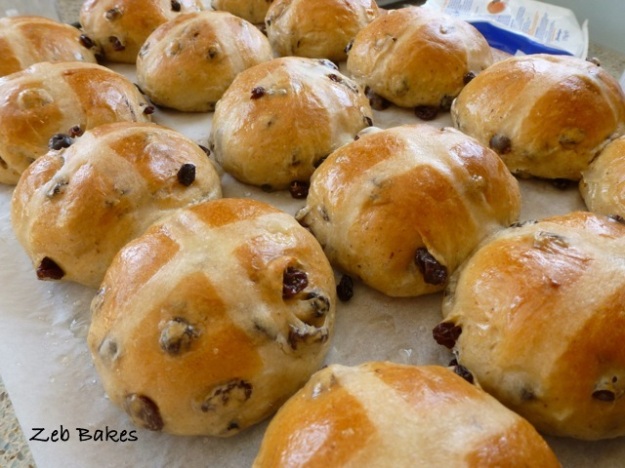 This year I decided to make the ones from ‘How to Make Bread’ by Emmanuel Hadjiandreou. This is such a pretty book, with beautiful step by step photos and clear easy to follow recipes, a good model for anyone aspiring to write a bread book. 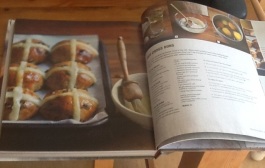 I didn’t really need another bread book but it was a want and if you visit Ray’s blog you can see some of the lovely breads that Ray is making from it, which is why I was tempted to buy it. The book gives quantities in grams and in cups, which is useful for those who prefer cups* and has a good range and selection of breads to make and I am looking forward to trying a few more of the recipes soon. Got to be more adventurous with my books!

These buns use a mix of soft and strong flours and a delicately spiced citrus glaze that is dead easy to make.

I liked the mixture of raisins and currants in the first batch we made. Brian liked these buns so much that he started a second batch when I went out; he added some finely chopped home made crystallised peel to the mix of fruits as he is very fond of mixed peel.

We ran out of unwaxed fruits, so I used these essences as a substitute for zest in the dough.

I noticed that if you add the spices with the dried fruit as in the recipe they are quite hard to get to blend evenly into the final dough. We tried it both ways, once mixing it in with the flour at the beginning and as written in the recipe. I have read that spice added too early to a dough slows down the prove and from my limited experiment here it would seem that is indeed the case. The second batch with the spice mixed in with the flour did take longer to do their final rise.

I also had to bake both batches for longer than the 10 – 15 minutes suggested. The recipe instructs you to preheat the oven to 220º C and then turn it down to 180º  C once you have put them in the oven. However after 15 minutes they were barely colouring  so I gave them another 5 minutes and even then they are not as brown as some people’s are. It might well be my oven, but I think another time I would bake them a little hotter, say at 190 º C.

The crossing paste was a bit runny and so the crosses sort of flattened out rather than stand proud on the top of the bun,  but that is something one can adjust and probably depends on how absorbent your flour is. I quite like them that way as I never liked the hard strip of dough on top of the ones you get in the shops if I’m honest. The glaze dried to a dullish finish so if you want really shiny buns you might have to add some glucose or something like that as well or a sticky syrup. Little Loaf has made some that I was admiring yesterday with a golden syrup glaze which sounds like a great idea!

All these small things apart, these are delectable soft buns with a lovely aroma of star anis and clove as you bite into them. They are frabjous toasted with melting french butter and the very last of my wild cherry jam from two years ago. As I have a big jar of glaze sitting in the fridge now, there may be another batch or two to come….

PS I haven’t written out the recipe in full as it isn’t mine to write out though I have seen it copied out on another site. There are however loads of hot cross bun recipes all over the net and they aren’t really all that different.  You can find Dan Lepard’s delightful stout buns on the Guardian website for example and his new ones this year have cider in them. We don’t have any of these in the house at the moment so I haven’t made them.

If you experiment with the flours you use then you will get a softer or a chewier bun depending on whether you use stronger or softer flours, lower the temperature and you will also get a softer bun. If you are planning on freezing some, it is a good idea to make this softer sort as you can then reheat them without them going dry.

* Lena has made this recipe using the cups version of this and found that the water is far too little for the dough so if you go that route be prepared to adjust the water for this recipe. You can see her detailed comments below. I used the gram weights as is my custom when baking  – so I haven’t tested the volumetric way of making these.