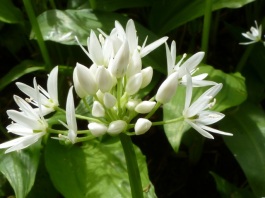 Down in the woods where the garlic and the bluebells line the banks of the Trym the unnamed stream runs under a little bridge; there you can find  a couple of fledgling grey wagtails – Motacillia cinerea – who are working extremely hard at the business of being baby birds.  This seems to consist of a lot of sitting and squeaking and keeping a very close eye on your parents and flying into the scrub when there is too much noise and activity on the banks.

Our little woodland is so well used with all the enthusiastic dogs running around that I am quite honestly surprised and overjoyed to see these babies. The wagtails offer a flash of colour from their bright yellow underparts as they trek up and down the stream all winter, looking for insects and other food and are surprisingly unbothered by the dogs and the visitors.  I think I wrote once before that maybe these particular birds have learnt to associate mammals with their food source, as flies congregate round fresh faeces, and that they see the dogs as part of their food chain, who knows? We have had them visit the garden once or twice and always for that reason.

It isn’t an easy bird to photograph, unlke a nice sedate swan or duck, the adult very rarely stands still and even when it is stopped for a moment on a stone or on the bank, its distinctive long tail is bobbing up and down.  The grey wagtail has grey upperparts and a yellow vent, a broken eye ring and a white supercillium.

The one most of us see in the cities in England is the pied wagtail, which turns up quite often on city streets, in car parks, and shopping centres with its distinctive black and white plumage. 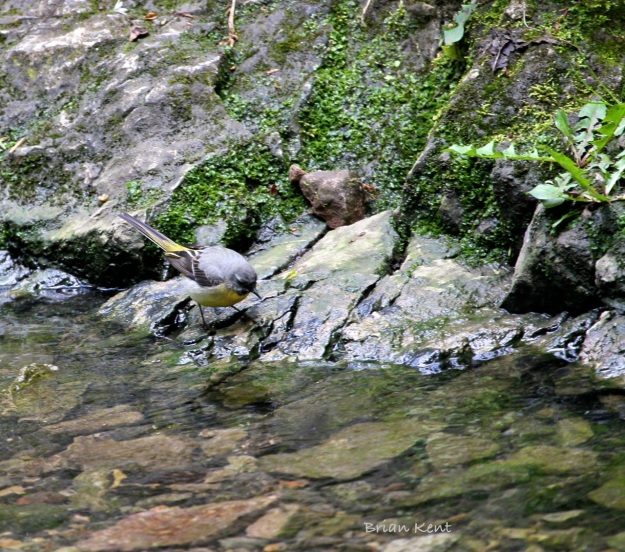 I have seen grey wagtails like these on flat roofs behind office buildings, but there always has to be a big puddle or something like that there. They are birds of the water’s edge feeding on flies, mayflies, beetles, crustacea and molluscs according to Wikipedia – I wonder if they eat the leeches that live under the stones.

This was my best effort, what is politely called a ‘record shot’ because it allows you to identify the bird with reasonable certainty but it certainly won’t win any prizes! My camera is simply not fast enough to catch them on the move. I have just added it as a thumbnail so you can click on it to see it bigger if you want to see it.

I asked Brian to have a go at taking some photos yesterday and these are the results. He used a Canon EOS IV. way too heavy for me. The birds are surprisingly well camouflaged against the stones and the lichens and the rippling water as it runs over the rocks.  It was easiest to photograph the babies as they stood quite still, the parent’s head is almost impossible to get in focus, most of the time, her beak was stuffed with flies and food and that also creates a blurred look to her head.

At one point three primary school groups appeared to do pond dipping as well. It is all go down there! 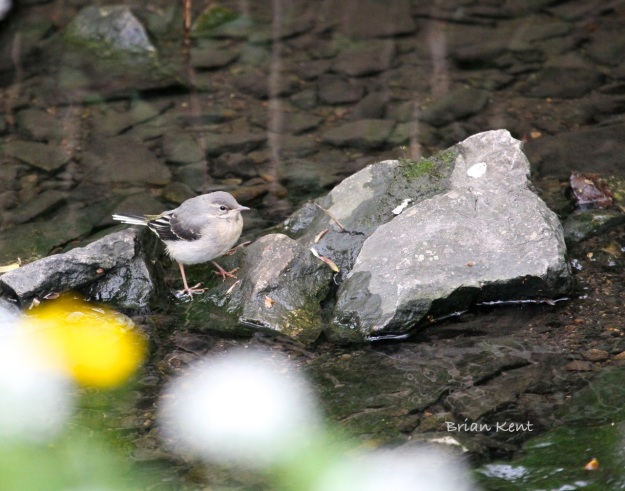 “If I stand here I will get some more food soon” 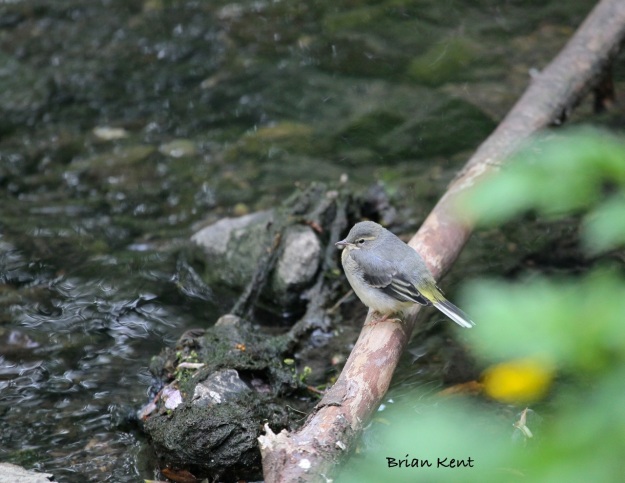 “Or maybe I should stand on this branch, I am sure I will get some food soon…” 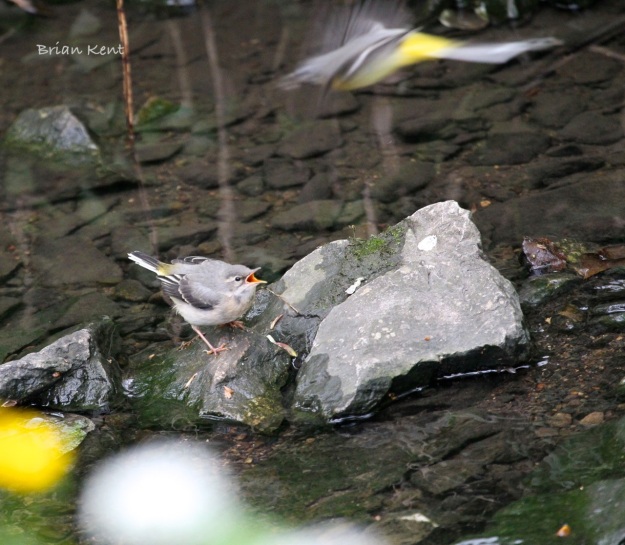 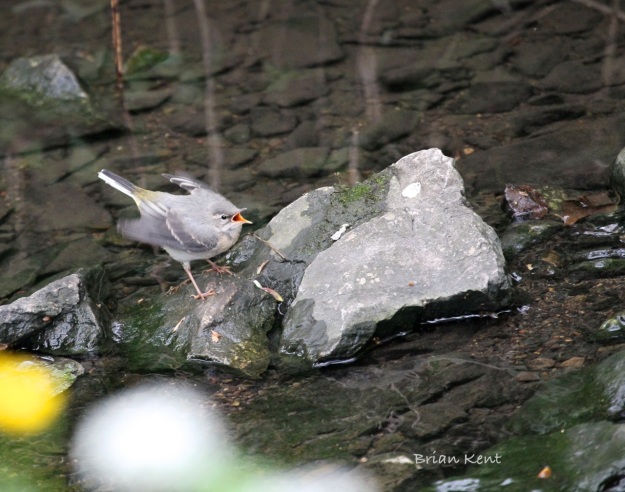 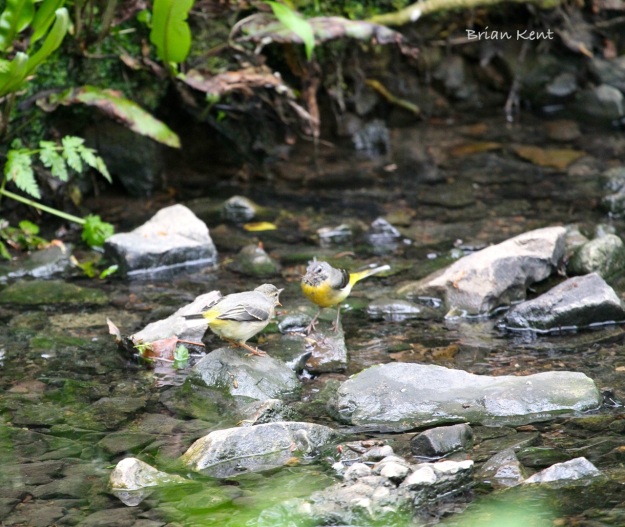 I forgot this one, which shows the male’s black bib more clearly, I think both parents feed the babies. 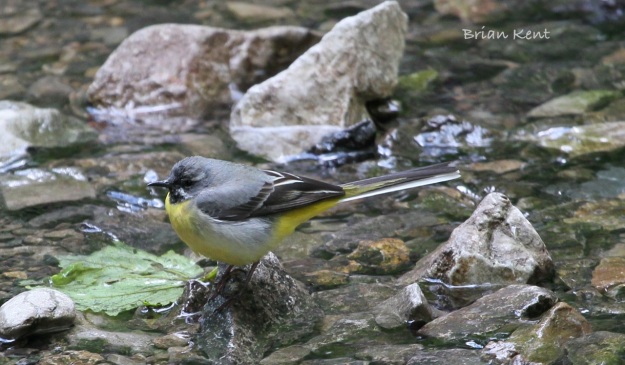 And so it goes, parental responsbilities eh?

This post is for Rose who tweets and photographs birds but I hope you like Brian’s photos too!

There is a nice bit of film here of a pair that has nested in a lock from BBC Nature.