If you have been reading this blog for a long time you might recall a post or two in which Mr IronFingers and I went out nettle picking. If I pick nettles I have to wear two pairs of gloves and make a huge song and dance about it. If the bag so much as brushes against my skin once it has nettles in it, I scream – just in case – a bit like the White Queen in Alice in Wonderland. If a nettle looks at me, I quiver abjectly. Mr IronFingers on the other hand laughs at nettles and grasps them firmly and then pops them in the bag. He who is hopelessly allergic to all berry fruit and their little tiny hairs does not react to nettles at all, how strange is that?

A pink bag of fresh nettles 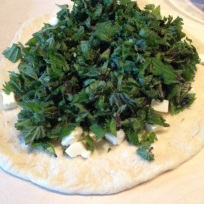 Pizza on way to oven 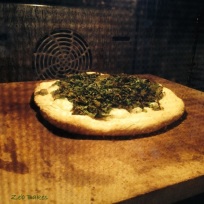 Pizza in the oven

So good I need to show 2 pics

It is now nettling time for those with iron fingers and /or amazing gloves. Brian will only pick them when they are short and young and haven’t got too dark in colour, he says his Dad picked them like that and they get too strong later on. He is very picky (sic) about his nettles. So today I was a bit sneaky, I suggested a walk off the beaten track and secreted one of those fold up shopping bags around my person,  then pulled it out with an nonchalent air when I saw some potential nettles and asked politely if he would pick some for me.  He obliged, the dogs ate grass and avoided the nettles and I picked a small bunch of wild garlic leaves and flowers and watched and waited for him to scream; he never does.

The original plan was to make the nettle gnocchi that we had made some years ago and maybe some soup but on visiting Twitter I saw a tweet that Carl had written an article about Spring Foraging in the Guardian and I had a look at it and lo and behold there was a recipe for nettle pizza so that was what we had to try. I made a quick pizza dough, persuaded IronFingers once more to deal with the nettles, wash, spin, chop, and season. I fished my wild garlic out of the bag and promptly stung my finger on a hidden nettle just waiting with barbs hovering to bite my delicate little finger. Ow Ow!

We seasoned the nettles as Carl suggests – those chilli flakes are essential! –  and substituted the wild garlic for the garlic cloves as we had picked some of that too and then, baked away and stuffed our faces.

A slice of pizza topped with tender and subdued nettles

I have to say that I thought the nettles would shrivel up like kale does when you make crisps but the seven minutes in a hot hot oven just cooked them beautifully and the combination of chilli flakes and nettles and melty mozarella was a complete and utter delight!

Carl calls this a ‘permie pizza’ in his new book The Permaculture Kitchen. It has great photos and an engaging tone and lots of recipes which encourage and inspire you to think creatively and use what you have and use a few things that you would never have thought of.  I bought a copy as soon as it came out, because I like to read books that friends write and even though we have never met in person, there is something about Twitter and the kindness and generosity of people like Carl and his wife Debs that make the world spin a little sweeter.

PS  I am experimenting with these Gallery settings, I have tried various permutations, currently trying the full scale carousel. Do you like the Galleries?  I think they load better on smartphones etc, but I don’t know what you think?  Do let me know if you have an opinion. Thanks!