This is my small contribution to the falafel making discussions.  I have till now, only ever either made a packet mix one or bought someone else’s and re-heated them.  I have read many posts and people saying sadly that their falafel fell apart and what was the secret, so I have been reading and asking a little and Lynne has been making them too and I think between us we are establishing some clues…. END_OF_DOCUMENT_TOKEN_TO_BE_REPLACED

Snapseed is an inexpensive photo editing programme for the Mac that I am quite fond of and try to use with restraint, though I do love the textures that it creates as above.

This is one of my most recent batches of sourdough rye crackers cut out with a spiral roll stamp which is a good use for this funny little object apart from making pretty patterns on small dinner rolls. Celia made some very good rolls with hers in her Playing with Bread post when we were going mad for Rosetta rolls last year.

Here are a couple of the other pictures, including some rather elegant, or so I thought, shards. These keep so well in an ordinary kitchen tub with an airtight seal. I keep the little packets of absorbent gel that come with camera equipment and put them in the tubs. You can dry them out in a warm oven when they get damp and re-use them, very useful! These crackers are well worth making if you have some spare time and a little old starter that you are not sure what to do with. I have adapted the original recipe to use other ingredients that I like, so don’t be afraid to do that too!

They do end up quite floury so I decided to dust them down with a clean paint brush as I don’t like the taste of rye flour when it is loose on the surface of a cracker. I did feel a bit like Mrs Matisse dusting the fruit (Great Housewives of Art) but it was all in a good cause. I am always delighted with the way that the sun transforms the appearance of bread. Rye has a characteristic grey tone normally but in the sunlight everything is touched with gold. 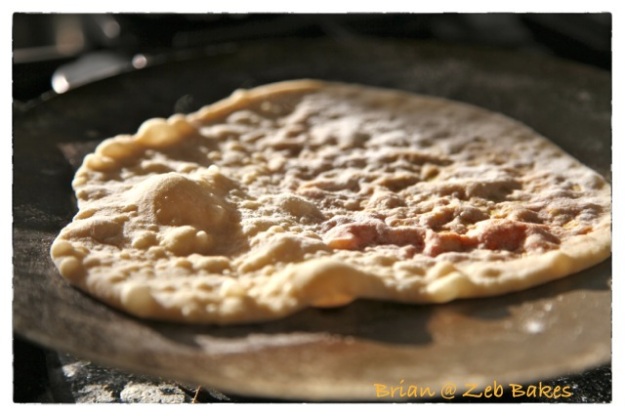 Here are some brilliant flatbreads filled with spicy dal rolled out with my magic Turkish rolling pin for Short and Tweet over this last weekend. This recipe is by Dan Lepard (P.73 of Short & Sweet, Lentil Filled Flatbreads) with the help of Franka Philip.  Check out Franka Philip’s photos of making these with Dan; she kindly gave us advice on Twitter on how to seal the little pockets of dough around the filling before rolling them out. Twitter is a funny place, I would never have thought I could ask a cook book writer I had never met for help directly but all the ones I have had contact with are extraordinarily kind and positive. Thank you once again Franka!

This dough was really interesting in that the dough is made without yeast or sourdough and is left to age in the fridge. Pooh pooh you might say, what difference would that make?  Well, the flat breads rolled out really easily after their long chill, puffed up in the pan and were incredibly tender to eat, light and just yummy.  If I compare them to these quick flatbreads that I made recently these Trinidadian style roti are way superior in terms of their tenderness and flavour. 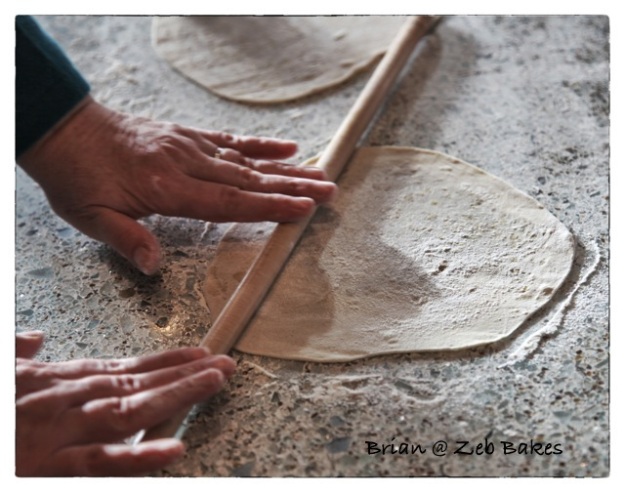 I had every conceivable colour of dal in a scruffy box in the cupboard, waiting for me to make dal with, except I only had half the quantity of the red dal I needed for this recipe, so I added some uri dal in, thinking that would be OK. It was in the end, but whereas the red dal cooks fast and goes quite mushy, the uri dal stayed resolutely uncooked for ages and retained its shape, so when you look at the photos you can see the pattern the uri dal made. Still it wasn’t a disaster by any means!

I found it quite fascinating how the spiced and garlicky filling started off dark yellow and then as it cooked again within the confines of the roti turned a wonderful rich amber-red colour. I don’t know quite why it did that, the combination of spice, salt and lentils? 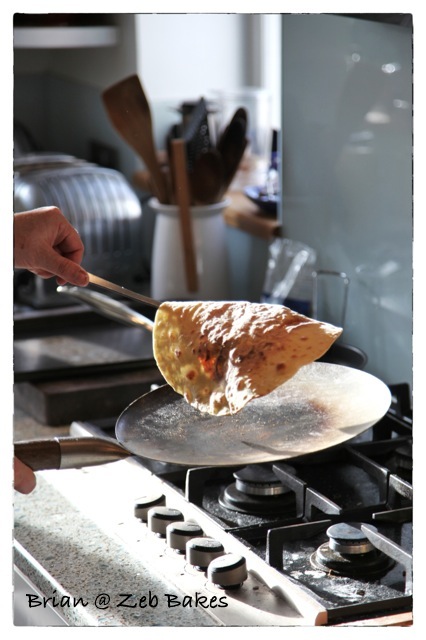 We used our flatbreads to scoop up a spicy pork mince dish that I made up with some freezer aged mince, garlic, ginger, fresh garam marsala, a mild  chilli and a tin of tomatoes (the sort of thing I made as a student, only a bit better than my cooking abilities then)  and a little dark green fresh spinach on the side. All eaten before I thought to take a photo, oops.

I rolled like a demon, a rather slow demon, and B flipped the breads in the pan. The recipe made loads, so we paused half way through our roti making, ate far too much and then I made the last few balls up and put them in the fridge for a further night. 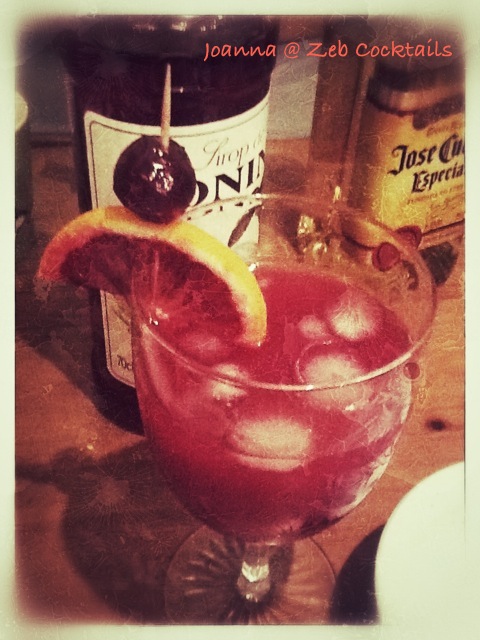 Incidentally, I also learnt that a Tequila Sunrise made with blood orange juice is called a Tequila O Positive. Dad gave me this beautiful glass when I visited him last year, he told me he bought it when he was a student so it has survived a long time.

I slept well after all that hard work, concentrating on the delicate rolling out of these breads. We watched the season finale of Borgen, best thing on TV the last month,  and shared a plate of atmospheric (dark and gloomy Copenhagen)  lemon cardamom (no baking powder this time!) madeleines made from Thane Prince’s recipe here. 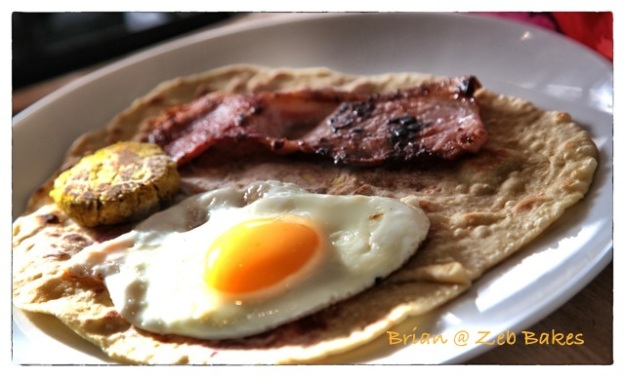 Edit: Another oops, I forgot to add this picture in!

Back to the tale of the Tender Ones – The following morning I pulled the remaining balls out of the fridge (36 hours after the dough was originally mixed) and rolled them out in the early morning sunshine and we had them for breakfast topped with egg and bacon and a squirt of tomato ketchup and took sunshine filled photos to share with you.  I was so pleased the sun came out!

Last year we made some alloo parathas  (left) with Mellow Bakers, but they weren’t a patch on these! I will definitely make today’s recipe again. We are going to investigate making thin rolling pins from dowel as I really think it makes it much easier to roll these little quite frail balls of dough out and I would like one that is a bit shorter so I don’t hit stuff off the worktop when I am rolling.

I am getting on much better with this skinny pin than I do with my big rolling pin, or else it is just practice.

PPS Here’s Evidence Matters’s super round up post for this week’s baking. Have a peek and discover some new blogs to read and if you want to join in it’s very easy and all explained over on her blog.

What have you been up to this weekend?