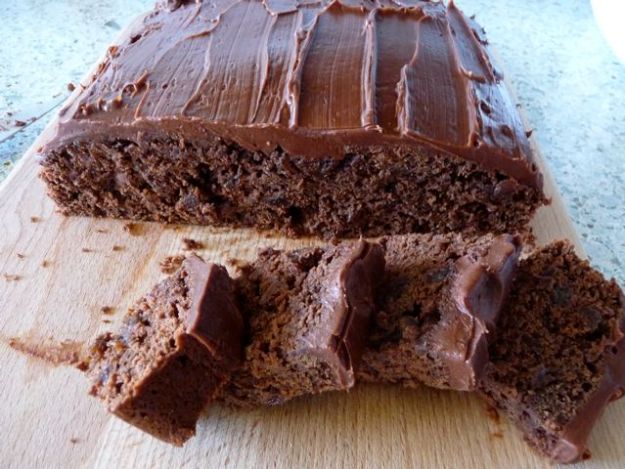 [Edited to take out links which are now ‘dead’]

I never hear the call to make things that involve coconut, that’s because I don’t have it in the cupboard. However I do have  chocolate, cocoa, flour, golden syrup, vanilla, butter, oats, raisins, egg, soft brown sugar, and one tin of stout left over from bun making – yes, all present – so I don’t have to go shopping for some obscure ingredient.

This is the first time I have mixed a cake entirely in a saucepan; so the kitchen was disappointingly tidy all the way through, unlike when I make bread.

Mackeson’s stout is a classic, sweet and creamy black beer made with milk lactose and whey.  I Googled it to find out what was in it.  Wikipedia inform me that is why there is a milk churn on the tin. I never notice things like that unless they are pointed out to me; I thought it was a rook from a chess set.

It feels a bit crazy pouring a can of beer into a saucepan and boiling it up with oats and cocoa as the first stage of a cake – cocoa beer porridge – reminded me of Babette’s Feast where the sister is making ale-bread soup.  But I have already used stout in Dan’s new Easter bun recipe so I was on familiar territory.  I am quite proud of my home made vanilla essence, something I learnt from Celia at Figjamandlimecordial which also features in this slice. 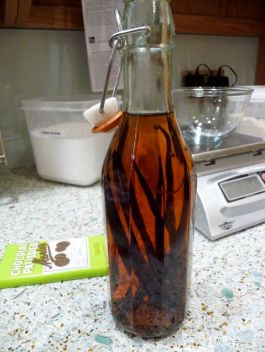 What’s it like?  It is  soft and moist with the oats and the stout, not as dense as you might think either, goes very well with a nice cup of tea on a sunny but chilly Friday afternoon. The cake part is chocolatey, juicy with raisins, creamy….and not too sweet – I am not good at describing taste but I am sure you get the idea. The icing is sweeter, as icing should be, but you could always make a different icing if you want less sugar.  I am not going to write out the recipe here, it is only a click away after all! [Edit: this recipe is no longer available on the internet as far as I know, if I see it in a new Dan Lepard book I will update again]