I’m going to start by being pernickety. This bread, and the two variations in this section of Bread by Jeffrey Hamelman, are confusingly called Whole Wheat breads.  They are in fact made with 50% wholegrain flour and 50 % strong white bread flour. In England the term wholemeal is used to describe a bread made only with wholegrain flour and it is one of the few bread names that is covered by legislation.

Here this bread would be called maybe light wheaten bread, or in an old fashioned sort of way, simply ‘Brown Bread’ and that is what I am going to call it in this post. 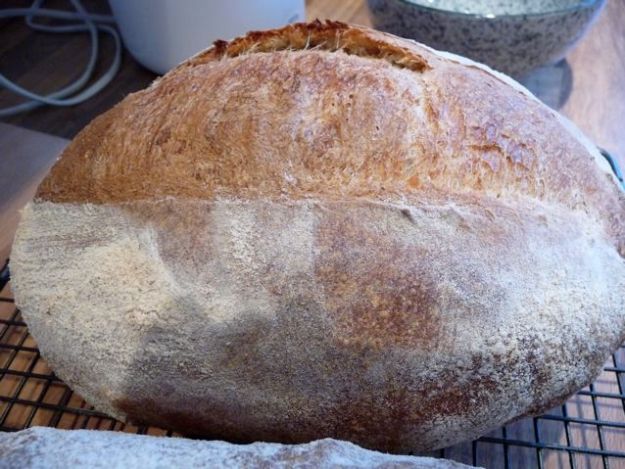 My next pernickety moment concerns Swiss Dark Flour.  This is a lovely flour produced by Shipton Mill, but what is it exactly? Well, it’s not quite clear. I asked last time I was there and was told that it was wheat, but not much more.

I first discovered Swiss Dark Flour when visiting the small alpine village of Saas Fee. To find out how the bakers made such delicious breads, I…

…visited the family mill at Brig where Mr Augsberger, whose family had been milling the flour for three generations, patiently taught us how to produce flour Swiss style! We are still learning. But in Switzerland wheat is still grown on the high alpine terraces and harvested by hand, then delivered to the mill in parcels as small as 500 kilos!

So now you know as much as me. Is it flour milled in a Swiss style, or is it imported Swiss flour? They’re not telling. I think it is the former, what do you think?

Anyway it is a very good flour, quite fine and without the large pieces of bran that you find in traditional English stone ground organic wholemeal.

All this is a roundabout way of saying that maybe the loaves I made aren’t even 50% wholemeal, because if the SDF isn’t 100% wholemeal then… anyway you see where I’m going and it’s a bit boring so I’ll stop.

The recipe uses a paté fermentée made with just white flour, and then you are supposed to mix it up with the white and the dark flour. Now, when I’ve done this before, I’ve ended up with light patches in the crumb where the all white pate fermentée hasn’t quite blended in.

I probably don’t mix my doughs quite long enough, but this time I thought I’d mix all the flours together first and then take out what I needed for the pre-ferment and then they would all be in the same proportion and it worked very well! I don’t know why Jeffrey Hamelman doesn’t write the recipe that way in the first place either. Questions, questions. 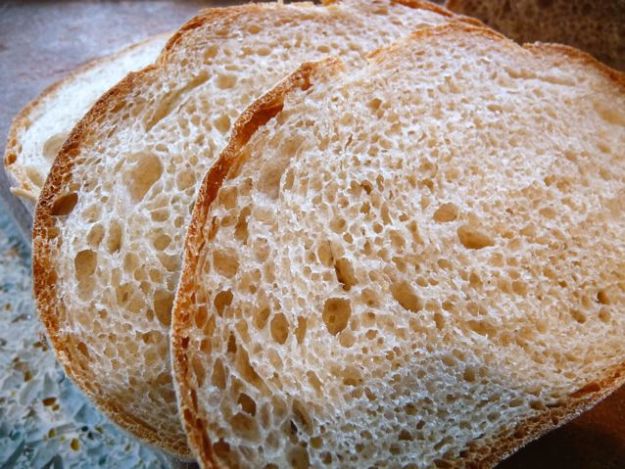 So to summarise, nice brown bread, hint of honey, makes you feel a bit more virtuous than if you are eating white bread all the time.  That’s about it. There are two more of these to make, one with currants and hazelnuts, and one with a grain soaker.

Do visit the Mellow Bakers site to see what the others are doing with this bread, there’s lots of variations and join in if you fancy having a go.

Here’s Melanie’s currant and hazelnut whole wheat bread and here is Abby’s multigrain one to whet your appetites!