We have had a quiet Christmas time, lots of walks, not too much sitting around eating, peaceful and serene when the wind and rain stopped. END_OF_DOCUMENT_TOKEN_TO_BE_REPLACED

The south-west and west of England are a good place to find wild garlic (allium ursinum) though I have seen it growing along the banks of the River Cocker in Cockermouth, tucked in the damp trough of the old Mill Race. 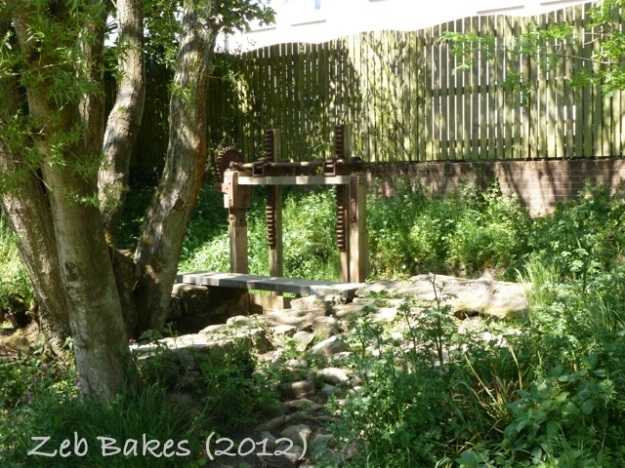 If it likes a spot it will surely but slowly colonize the ground. It likes damp and it likes light dappled shade, and it comes into flower more or less as the trees start to leaf up, though you can pick the leaves much earlier in the year when it first emerges.  Once the canopy has filled out and the trees are in full leaf overhead,  the leaves shrivel and the wild garlic plants set seed and vanish for another year. You can also buy bulbs from suppliers on the internet if you want to try growing it in your garden. 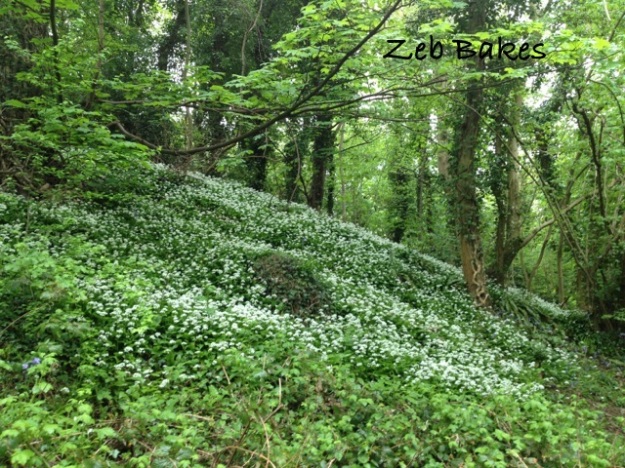 I first came across it many years ago as a student when I walked from Wooton-under-Edge to Bath on part of the Cotswold Way with two friends, much fitter and light of foot than me. It was a hot weekend and I was glad to get out of the bright sunshine in the cow pastures and bridleways and walk through a cool green wood for a time.  The pungent and distinctive smell of garlic was everywhere, starry white flowers drifting up the slopes, with bluebells and cow parsley layered in.  I remember wrinkling my nose and saying, ‘But that’s garlic!’  I think I thought then that garlic only grew in warmer Mediterranean countries.

The memory stayed with me for many years and when I moved to Bristol eight years ago and found it growing in almost every damp woodland here I researched it, realised it was edible and now pick some every year to use in my cooking. It has become very trendy and fashionable and is sold at farmers’ markets in London and around the country.

If you were in one of these woods in January you wouldn’t really believe that come May they can be carpeted with garlic, I reckon it is one of the safer plants for the beginner to pick and eat as the smell of the leaves is so distinctive, having said that bluebells and anenomes are poisonous so do make sure that you can distinguish between them. I have read also that some people confuse lily of the valley with wild garlic. I have never seen them growing together here, but again it is worth bearing in mind. I have some older posts on this blog with close up photos but if you search internet images you should find many photos and descriptions to help you. It is worth noting that the plants do vary in size. The ones we picked yesterday were very big and tall, but the ones I see more locally are shorter and smaller.

The plants die back in the summer and all that are left are the bulbs hidden underground till next year, so it really is very seasonal.

I haven’t picked much this year, just one lot that I used in the semolina bun bread last month and at the weekend on our walk I thought I would grab a dog bag’s worth and make some pesto to put in the freezer as the ‘season’ is almost over. 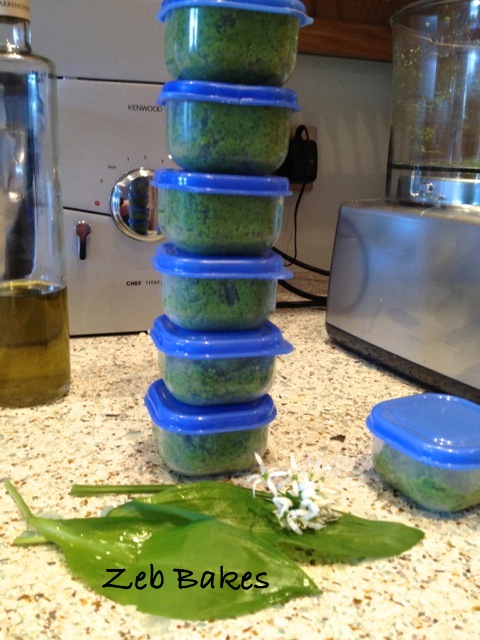 I can tell you what I did and what I put in it, but I haven’t got really good quantiities for you as I made it by eye and taste.  Pesto is one of those Humpty Dumpty words these days as people seem to put what they like in it, some people leave the cheese out altogether, some people add lemon,  but it is a convenient word so I use it here.

We put the garlic in the food processor and added olive oil until the leaves were chopped up, then added the other ingredients and held back on the oil to make a thick creamy paste. I don’t like pesto when it it very oily.

I then spooned it into little 2.5 cm tubs and put them in the freezer. I have read that some people freeze them in ice cube trays and then pop them out and store them that way, but it is one more process and I am a lazy person!

I had held back a handful of leaves and Brian made this wonderful dish which we had for supper with the Black Badger peas that I had cooked a few weeks back and frozen.

The Black Badgers have quite coarse skins but these seem to have softened up in the process of being frozen and defrosted and I think they are fantastic.

Brian came up with this which reminded me of really good hippy food from the 1970s and 80s -think Cranks, and Food For Thought and the Hare Krishna restaurant on Soho Square. We ate them with a piece of Cumberland sausage and some pita bread and some steamed purple sprouting broccoli. 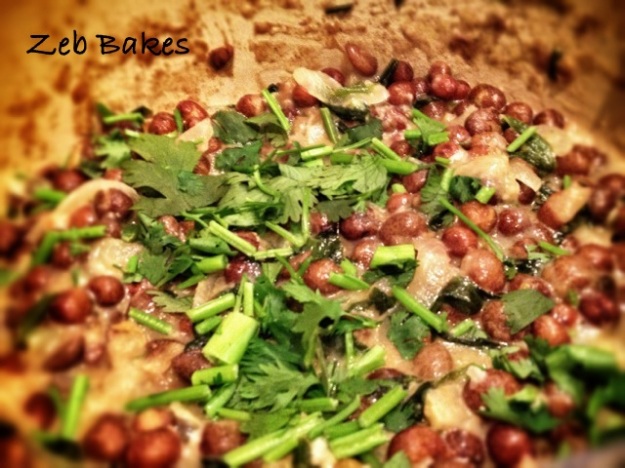 If you can’t get Black Badgers, you could make something similar with locally grown peas or beans.  They are full of good fibre and protein and often overlooked in favour of perky fresh vegetable;  we lived on dried pulses in years past in this country, survived on them through the winter and the hungry gap when the new crops hadn’t come through yet.

What were the traditional winter foods where you live – before the days of freezers and 24 hour everything available all the time shops?

Westonbirt Arboretum in Gloucestershire has a magnetic pull on anyone wanting a Sunday walk on a cold bright November afternoon.

This is their busiest time of year and the acers are so busy being photographed that they barely have time to let another brilliant yellow leaf flutter delicately to the ground.

Zeb and his sister are in heaven here, no mountain bikes, no cars, the odd deep and muddy hole, grass and turf, leaves to tumble and other dogs to meet. Dogs are welcome in the Silk Wood and we dog walkers are very grateful indeed for their hospitality. Those of you who don’t like dogs have the old Arboretum to walk in untroubled by them too. Something for everyone here.

It’s a wonderful and magical place, full of peace, light, dappled shade, extraordinary trees, a friendly plant centre, a franchished restaurant/tea room which is OK, children’s play spaces, lots of events if you like them, workshops, all sorts goes on there. 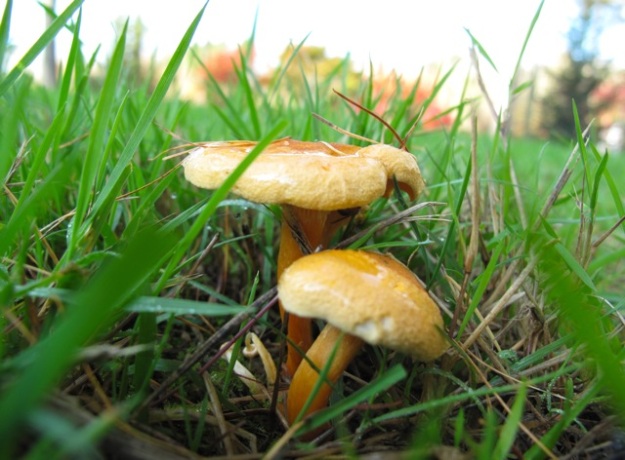 Go for the jewel colours of the Autumn display, sneak off away from the main paths and wander across the badger sets, and look for butterflies and fungi, pose with trees, they’ve seen it all I imagine, and just have a lovely time. 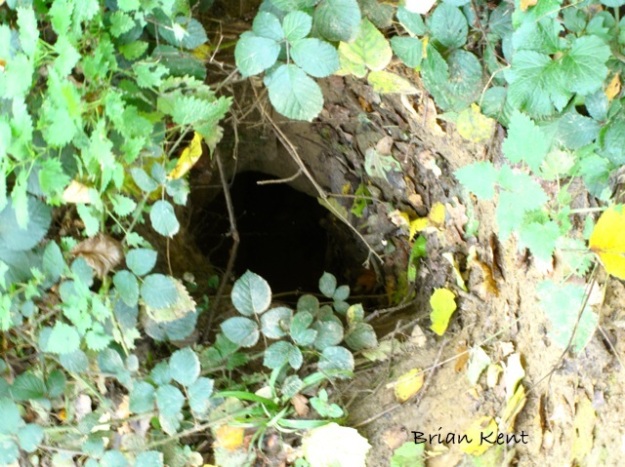 I guess I should explain this one; it’s one of the nine visible entrances  to an enormous badger set (or sett) , not far from one of the main paths through the Arboretum, we reckoned the set covered an area at least twenty metres across, maybe more. Fortunately most poodles are not interested in going underground to explore.