I love them you see, particularly English ones, like early Victorias with their yellow and pink speckled skins and their greenish insides, little wild mirabelles gathered from ornamentals in the park, or just plucked from a tree branch overhanging the street,  eaten fresh as they are, or in a plum sorbet, or baked in a crumble, as a cake topping, ruby jam liquifying on a buttery crumpet in the middle of winter, or spicy in a chutney with roast potatoes….

This is a great new plum recipe from the Dan Lepard Guardian column for a Wholewheat Plum tart. It reminds me of a french patisserie cake for some reason; it’s not quite cake and it’s not quite tart.

The base is dense and has a slightly dry mouthfeel, due I think to the wholemeal flour or maybe I overcooked it,  but it is spicy with cinammon and works beautifully with the plums and the shiny sticky glaze of warmed jam that you put on once the tart has cooled down.  I thought the sherry cream might make the whole thing a bit rich but it worked well for us.   It was also an easy one to make, I used Shipton Mill’s fine wholewheat pastry flour as I didn’t have any stoneground wholemeal so I am not sure if that had an effect on the final result or not.

I really enjoyed it the next day warmed up.

The glistening plum jam glaze caramelized slightly on being reheated and made it extra delicious the following day. 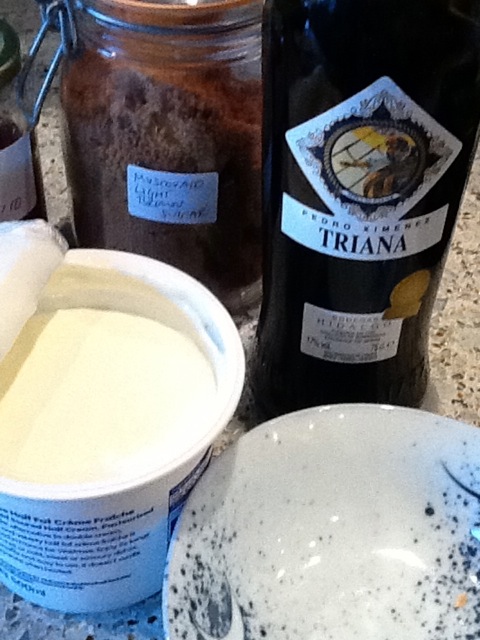 I used a mixture of creme fraiche, brown sugar and Pedro Ximenez sherry for the cream topping. Wow!

The photos all came off the Ipad which is why they look a bit grainy, but I hope you get the general idea of what it looked like. I think the plums I used were very firm, they didn’t collapse quite as much as the ones in the photo on the Guardian. As a footnote, I tried making this again, only using apricots instead and it wasn’t nearly as successful, the apricots contained far more water and they made the centre of the cake soggy. So if you make this, stick to the recipe!

I also like prunes, particularly the French pruneaux d’Agen, which have a completely different taste from those big chewy Californian ones. But prunes will have to wait for another day….

Just got back from a long day’s driving… what a lot of rain. The word Puddles is an understatement, Flash Floods more like. Edit: I’ve just seen the late news. There were floods all along the South Coast, we must have driven through part of it on our way down to London. A month’s rainfall in a day in Bournemouth….